Nine in a Box 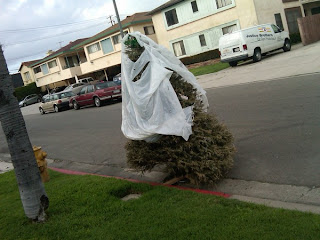 Two-story box. That's what we live in. Our box is very similar to the one that you'd see in the trailer for the The Slums of Beverly Hills movie, except that our box isn't pink (e.g. check the :09 mark in the trailer).

Our box is broken down into seven apartments. Nine of us live here -- five solo tenants and two couples. Here are their stories...

The ginger appeared about once a week. He's the 20-something guy in our apartment building who got shut out of a parking space. Seven units -- six spaces. I suspected that our slumlord had a bias against gingers. Occam's Razor simply suggested that the ginger got shut out because he was the last person to rent an apartment. Now, he's stuck on a waiting list until the next tenant moves out. For now, the ginger circles the adjacent blocks in a desperate search of a spot because parking is ridiculously sparse in our hood.

The artist, in her late 50s, uses her studio space a few days a week. Nicky is convinced that she lives in the building because she's actually been in her apartment (more like a huge one-room studio) and noticed a bed in the corner. I told her that most artists that have studios also have a crash space to sleep or to hook up with art groupies. The artists' car is noticeably gone more than 50% of the time during the day an almost 90% of the time at night.

The 40-something-year old French lady chain smoked. I didn't know she was French at first until I heard her speaking on the phone. When she first moved in, I assumed that she was an American, but since my discovery, I noticed a ever-so-slight accent. Maybe she was born her to French immigrants? Or maybe she was born overseas and migrated to LA? Who knows. I'm pretty sure she's a gourmet chef because I noticed a tons of cook books on shelves in her kitchen. Her evenings were spent sitting on her couch, smoking, and watching the alphabet news stations in the dark. At night, I often passed by her apartment only illuminated by the flickering glow of the TV.

The single girl with dark black hair has never said hello to me. I gave her the benefit of the doubt and assumed she was shy, but maybe she's just an embarrassed USC grad who's stuck in a dead-end gig as a waitress? Every morning around 10am, she slammed the door to her her apartment and stormed down the stairs. She's always wearing the same clothes -- black pants and a white dress shirt. That's why I knew she was a waitress. I wonder which restaurant she worked at? Maybe she'll talk to me if a tip was involved?

My only problem with the hipster couple above us is their kitten. Sometimes that fucker is jacked up. Are they putting meth in his water dish? On the other side, I bectha my neighbor vents her frustration about her wacky neighbors by writing diatribes on her LiveJournal blog, or making fun of me on Facebook: "My neighbor downstairs smokes weed all the time and constantly yells at his TV expressions like: 'HIT YOUR FUCKING FREE THROWS!'" On a good note, I found inspiration when my neighbor played her violin in her practice room, located right above my office. As much as I rag on Los Angeles, thousands of creative types are sprinkled throughout the city hell-bent on chasing their dream. I dunno what sort of market Hollywood has for violin players, which is probably why she recently took up the ukulele. Nicky told me that the other day she was practicing a performance of Cee Lo Green's Fuck You.

And then there's the angry-pissed off-unfriendly yuppie across the hall who drives a BMW. His friends that visit him also drive BMWs. I think it's a cult, or a club, or just required membership to being an LA Douchebag. Angry BMW guy constantly walked around with a permanent scowl. I attempted to say hello and introduce myself on numerous occasions, but he always avoided eye contact. Well, you know what? Fuck him that guy! The BMW guy probably leased the BMW and spent most of his income on payments and insurance. He has next to no furniture in his apartment -- just a plasma TV, a couch, and a dining room table. Nothing else. He's a suit of some sort. Haven't figured out what. I noticed one thing -- he liked baseball. In the summer's at night, there was always a baseball game on. Made me wonder if he was one of those geeky fantasy baseball league guys?
by Pauly at 2/12/2011 04:20:00 AM