5am Rum, Aliens Invade Santa Monica, and Wake of the Flood

5:10am. I'm drinking rum. Not sipping. Drinking. Semi-heavily in the eerily silent City of Angels. The only external sounds are the rumblings of a garbage truck a few blocks over. By the time the truck reaches my street, the tsunami waves should be reaching the shores of Hawaii. That's one of the reasons I'm sitting here at this hour and consuming rum like it's happy hour in the Bahamas. The same waves should reach the golden shores of California around 8:30am. The morning rush hour. I know some deviant fuckers are going to try to catch some gnarly waves, but a curious part of me wants to drive down to the beach and wait to see... what happens.

Nicky is up as well, very rare for her a this 5am hour, but she's been sucked into the drama. She grew up in California and survived the Northridge jolt, so quakes are indigenous for her. Right now, she's playing online poker, self-medicating with a strain called "Charlie Sheen" (no bullshit), while constantly flipping back and forth between different online news sites and Twitter. I rarely watch the alphabet news networks on TV, heck I've watched more Al Jazeera in 2011 than ever before, along with Russia Today and the BBC, so I have no desire to watch CNN or Fox. If I want to watch puppets, I'll turn on The Muppet Show.

A devastating 8.9 earthquake rocked Japan around 11pm Thursday night -- just as I was ready to head out to see the premiere of Battle: Los Angeles for a Midnight showing at Century City. The movie was Independence Day meets Cloverfield but with M-Rod and a cameo from a Tom Brady's baby's momma. At midnight, the theatre was almost packed. We had assigned seats, which I selected when I bought the tickets online. The theatre was filled with a lot of sci-fi geeks, stoners, and high school kids. Nicky wanted to see it because she 1) loves disaster movies, and 2) loves to see L.A. blown up on the bog screen. I nibbled on a little sliver, had a couple of cocktails, and was ready to escape into the fantasy world of Hollywood and watch aliens invade Santa Monica, meanwhile on the other side of the world, in the real fucking world, Japan is under siege from the worst earthquake that they've ever experienced (and the 5th strongest recorded since 1900). Yeah, as aliens stormed the beaches of Santa Monica, the same beach was expected to absorb the last remnants of the tsunami. I doubt the waves are anything more than a couple of feet, but expect the local news to go ape shit over it and have the alphabet news networks drooling over the change to get viewers to tune in. 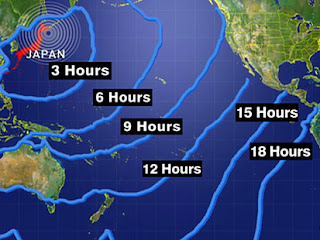 The last time a big earthquake hit -- the 8.8 terramoto in Chile -- Nicky and I were in Punta del Este, Uruguay on a work assignment. We actually slept through the earthquake. A few hours after it struck Chile, I stumbled into the tiny cafe area of our hotel and joined my colleagues (Serge from Sao Paolo and Rey from Costa Rica) for breakfast before we went to work. I was hung over to all hell and ate a croissant while the earthquake dominated the conversation. The next morning before breakfast, Rey knocked on my door to tell me to put on a local TV station. There were riots in Concepcion, well more food-inspired looting than actual riots. People were hungry so they broke into a grocery store and the shelves were plundered by thugs and starving people. When Nicky saw all that mayhem, it kinda freaked her out because there's always that looming fear of "The Big One" will strike L.A. and California will sink into the ocean. She thinks we can survive a bad quake, but that was the first time she saw the fall out -- chaos and anarchy. At that point Nicky finally acquiesced to my interest in owning a Mossberg.

Flash forward to now. Nicky flipped the channels and shrieked, "Oh my God, is that Geraldo Rivera?"

Um, yeah...it was. He was one of the talking heads chiming in about the tsunami reaching Hawaii (I dunno if he was actually in Hawaii), but as I blurted out to Nicky, "If Geraldo is involved, then you know NOTHING is going to happen in Hawaii. Just like Al Capone's empty vault."

Well the one good thing about the tsunami is that it completely erased Charlie Sheen from the news cycle. By the way, as we're on the verge of entering into the Libya dispute for the third war (or military intervention) since the inception of American Idol, that's nothing compared to the Middle East tsunami that's going to hit shortly. With police in Saudi Arabia currently shooting protesters, and much larger and organized protests planned in the forth coming weeks. Saudi Arabia is home to Mecca and one of the largest oil fields in the world. But I'll save that rant for an upcoming post on Tao of Fear.

For now, I'm glued to AJ online and flipping back and forth between the different news stations. I'm on pace to be completely shitfaced when the waves reach California. Then I can call my mother to let her know that I'm alive and survived the tsunami, so she'll stop pestering me, and I can pass out because at that point, I would have been up for almost 28 hours.
by Pauly at 3/11/2011 08:10:00 AM