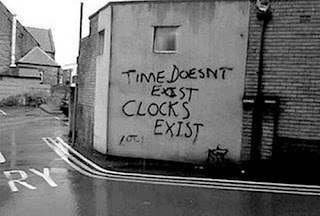 Time. It's one of the most invaluable resources known to mankind. I wish I had more of it. When things were going good in life, I wish time slowed down. When life was excruciating painful, I wished time sped up.

I never have enough time for work and play. I wish I had an extra few hours in each day to accomplish what I really want to do. My internal body clock is set for 30-32 hour days, which is why I have trouble sleeping whenever everyone else is supposed to sleep. I knew someone who was very depressed because they didn't have enough time to read all the books that they wanted to read. I thought that notion was petty and dismissed it... yet almost twenty years later... I'm starting to understand what they meant.

In my office, I'm taunted by a pile of books that I started reading but never finished. That pile is significant;y larger than my current "to read" pile. If I had more time to read, I would. Instead, if I can't get into a specific book for whatever reason, I get guilty because I'm a voracious reader and want to keep reading. So, I put the fledgling book aside and pick up a new book that I think I can read much faster because the topic seems more compelling.

Time is weird. When you're a kid you're always waiting for something big to happen while living a linear life. The older you get, the more haunted you are by memories and anxiety. You're anxious that you don't have enough time to accomplish whatever it is you're trying to accomplish. I always felt sorry for friends who were specific with their life plans because they were trying to squeeze in real-life into a linear time line. Instead of enjoying the moment, they have to stick to a rigid schedule. That might make goal-oriented people feel better about themselves, but they also do a disservice to the entire "experience" that makes life an amazing mystery.

I'm the type of person who likes to plan for almost anything, yet will throw all that out the window on a whim. It's sort of like a band creating a set list before they take the stage, then abandoning the entire game plan and playing songs based on the vibe of the crowd, or perhaps following a bit of intuition.

For most of my adult life I rarely wore a watch. This was possible because for many years I was lived the life as a beatnik on the fringe and had no need for time-keeping, but then technology swooped in and created cellphone which had its own clock synced up to the Mothership. In my 20s I never wanted to know the time, but in my 30s all I had to do was peek at my cellphone to be reminded about how little time I had... or how much time I wasted. In short, a clock/watch often ruined the zen-like moment of being in the monent.

When I lived in Seattle in the post-grunge era of the 90s, I had a friend who said he never wore a watch because you could ask anyone what time it was and they'd tell you (if they had a watch). I told him that some folks have slow watches, or A-type personalities set their watches ahead by a few minutes. I know that's what I used to do when I owned a watch... keep time five minutes faster.

When I left Wall Street the first time, I ditched my watch. It was one of those symbolic moves that represented my angst against the Establishment... because only the Man wanted you to adhere to time keeping in order to keep you down.

I bought a watch in 2000 before a trip to Japan. I lived in NYC at the time and went down to Canal Street in Chinatown, where I found a knock-off Swiss Army watch for $10. I only bought the watch because Senor and I were traveling to several cities in Japan and riding the bullet trains. Japan is a society that operates efficiently and on time. The subway and JR (train) stations broke down the arrival of the next train not by minutes, but by minutes and seconds. The watch was essential because we didn't want to miss a train, plus we didn't speak Japanese so we couldn't ask a local what time it was. During our time in Japan, we didn't miss a single train.

After that epic trip, I didn't use a watch ever again. I kept the knock-off watch with me until the battery died and then I ditched it.

When I worked on Wall Street a second time shortly after 9/11, I had a cellphone which told me what time it was. I always thought... "what would happen if the lights/satellites went out... then how would I tell the time?"

When I was a kid, there was a specific phone number that you called to get the exact time... at the beep. These days, you just have to go online and check out the atomic world clock.

I've read my fair share of "preppers" websites and other emergency preparedness that suggest you stash away an alternate wind-up watch because so many of us don't have watches anymore and rely on digital clocks, cable boxes, laptops, or cellphones to tell time.

I'm a denizen of the West Coast and you really have to prepare for the worst and hope for the best. I have an earthquake kit that also doubles as a bugout bag just in case the shit hits the fan. Ever since I was a little kid and saw the first Superman movie (with Gene Hackman as Lex Luthor living in a lair underneath Grand Central Station), I became cognizant about how the San Andreas fault could blow and California would sink into the ocean. Decades later, I'm an adult living in SoCal and flirting with potential disaster. Someday the big one will hit... but when?

That time bugger comes into play again. When will the big one hit? If it does, will I have the proper supplies to be able to tell time? And if I do survive a big quake, what good is a watch if civilization breaks down? It's not like I can trade a useless watch for food, water, or medical supplies.

I watched a few videos over the summer about Terrance McKenna's theory about Time Wave Zero. McKenna noticed a pattern in the I Ching and mapped a graph (covering all 4,000 years of record human history since the dawn of civilization) over a time line that had some mind-blowing correlations. He called it Time Wave Zero, which had accurately depicted major Earth events like the fall of the Roman Empire and both world wars. A lot of people are freaked out because McKenna's time line bottomed out and stopped in December 2012.


McKenna thinks that time and space is getting condensed... and will eventually disappear. Do your own research about McKenna's theory on Time Wave Zero because it's some pretty heavy shit.

I do not believe in a Mayan doomsday, but according to McKenna's Time Wave Zero, we're entering a new era. What that era will be? I have no fucking clue. But will my "time" woes be alleviated? Or will this just usher in a new wave of problems? Or perhaps lead us onto a new path of time and space?
by Pauly at 12/17/2012 04:20:00 PM