Conversational Gridlock in the Land of Sunshine, Freeways and Botox 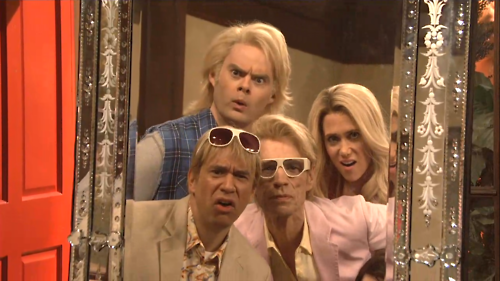 I started watching Late Night with David Letterman to keep up with the inside jokes and "Top 10 List" by taping the show at 12:30am, an hour after my bedtime. I usually fell asleep watching Cheers reruns at 11pm, then woke up a half hour early to watch the highlights on my VCR and fast-forwarding through the commercials.

On Monday mornings, homeroom/advisement was devoted to recapping Saturday Night Live, which ranged from sharing our favorite bits to outright attempting to act out a sketch. By definitions, all Monday mornings suck but the devotion of my classmates to SNL made Monday mornings palatable.

Flash forward to this morning. I wandered over to the local diner and made sure I let the quartet of LA cops exit first before I found a seat near the front, which had the best (natural) lighting, something I preferred because I life to read a book, a real-life book with pages and everything, instead of ogling my phone like every other schmuck in the joint.

A trio sat in the front booth: middle-aged guy dressed like he was a 16-year old skater kid, plus two younger women, one of whom wore psychedelic yoga pants that had the same color scheme as Jimi Hendrix's Axis: Bold As Love album. Actually upon closer inspection, one of them was obviously from Botox City, a sure-fire clue she was at least in their 40s, yet she dressed also like a teenager. It reminded me of that line from Greenberg: "In L.A., all of the kids dress like superheros and all of the adults dress like kids."

I didn't notice the front booth when I walked in, but I immediately overheard their raucous conversation the moment I slid into my seat. They were semi-arguing about freeways and the quickest way to get from Culver City to Silver Lake. Trying to fade traffic is common chatter among native Angelenos, but this animated booth prattled on with exaggerated SoCal-accents.

I had a instant flashback to my high school homeroom... OMG... that booth was re-enacting a sketch from SNL, specifically The Californians.

If you don't watch SNL anymore, there's a really bad recurring sketch (so bad, it's fucking rad) called the Californians. It viciously mocks two things: 1) trashy afternoon soap operas with atrocious acting, and 2) how people in LA smugly speak to each other... never in complete sentences but peppered with driving slang. Every installment of Californians eventually includes multiple discussions on the fastest way to get to a specific destination, and which shortcuts (side streets and tertiary routes) will be the best way to avoid traffic.

It's funny because it's true.

A lot of viewers don't like Californians because they just don't get it. And a few locals don't dig it because they can't take a fucking joke. The rub is simple... traffic is ubiquitous in LA and almost all of SoCal... yet that's all anyone every talks about that does not include themselves.

Q: "How's the latest draft of the screenplay?"
A: "Jesus, that traffic. Took me forever. And then I couldn't find parking."

I forgot to comment about the "parking situation" in the LA universe. Besides bitching about traffic, the second biggest complaint is parking... the lack of street parking, or how the valet guys steal everything.

Technology alleviated the traffic headaches for like a week before everyone else downloaded the same fucking app. Even when I look at different traffic websites or an app, the results are always the same... big fucking red streaks to indicate gridlock. Red streaks everywhere.

In a bastion of self-absorbed vapidness, the pinnacle of braggadocio is eschewing technology and relying on knowledge of the quickest routes and locals' shortcuts in a city paralyzed by gridlock. But, here's the rub... It ain't going anywhere. Yet, everyone likes to 1) complain about their former shortcut not working anymore, or 2) brag about knowing the best alternative routes. Dirty secret? In reality, #2 is not the case because the best-kept shortcuts are never truly revealed because if you gave up your sweet alt route, then everyone else will eventually take it thereby causing yet another traffic jam. Instead, they give you the "second-best" route.

For fuck's sake, I can't believe I'm writing about this. See, I've been corrupted and co-opted and I don't even drive a fucking car.

So the front booth...

I tried to convince myself that they were acting out the most recent Californians sketch from SNL. But after a couple seconds I realized my assessment was totally off base. One of two of them might have been actors, but they were not performing or doing a bit. Nope. This was real fucking life. And that was how they really fucking talked. The three loudly argued over the best routes. One of the women talked so fast I wondered if she was railing lines of Adderall at the table. Holy shit. I assumed her prescription speed kicked in? How is anyone that chatty at 8am, unless they've been up all night hoovering foam.

They were loud and annoying and I hated them instantly. I usually give someone five minutes to prove to me that they are a moron, yet in this instance it took all about 15 seconds to decide I would like to take three, dirty, rolled-up socks and stuff them into their yappers.

I chastised myself for being so judgmental. Buddha wouldn't have done that. Right? I should be more patient and tolerant, even in the land of the Californians.

Then again, Buddha wouldn't be sitting in a greasy diner trying to read a Joan Didion book while a bunch of highly-vexing hipsters and Botox queen argued about who had the best routes to Silver Lake.