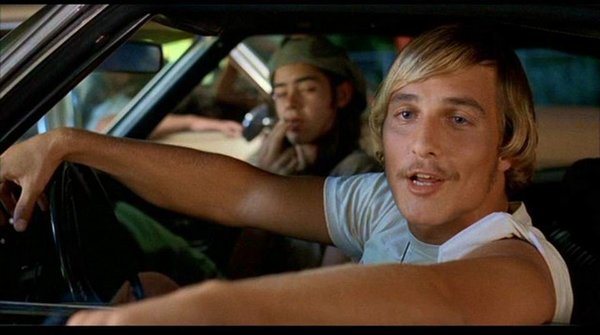 When I was 20, I was heavily influenced by two films by Richard Linklater -- Slacker and Dazed and Confused. I saw Dazed in the movie theatre about 15 times in college. We'd all get blazed to the tits in the parking lot and sit through the film, which was set in 1976. That was unheard of because period pieces on the 1970s were few and far between in the early 1990s.

Linklater is more important to me than you think. He inspired me to embark on a creative path and make movies. If this were Bob Evans talking, "When I was a kid, I really really really wanted to work in the pictures."

When I graduated college, I had aspirations of becoming a director. A true pipe dream. Right around the same time, I saw Reservoir Dogs by Tarrantino and Clerks by Kevin Smith. Those three filmmakers -- Smith, Tarrantino, and Linklater -- inspired me to apply to film school even thought I was a longshot and way behind the curve. I studied more film theory in college (I had a minor in Film Studies, but I was a double major in Political Science and Philosophy) than the actual nuts and bolts of film making. As a result, without any student films to boast of, I was rejected from NYU Film School. Not once, but twice. I eventually got into a film school in Vancouver, British Colombia only because it was sorta open admissions. If I had the money at the time, I would have gone. Or I should say, if I had a family that shared in my vision, I could have borrowed the money from them, but they thought I was crazy. They were really miffed when I quit a job on Wall Street (I was in a bond trader training program, but utterly miserable and thought I'd do the job for a couple of years to save up to buy equipment and fund film school) to pursue the creative arts. They thought I was wasting a college degree on a hopeless venture. I'm glad I never listened to my family because I never would have gotten to where I am today by listening to their poor advice, like the one time an uncle told me to take the NYPD exam because it paid overtime and had good benefits.

Alas, film school was never meant to be. I stayed in NYC and continued the path I was on... humping shitty job after shitty job and using whatever money I made (or won from gambling) to fund travel adventures (some of which included Phish tours and Jazz Fest). I often think about what would have happened if I went to film school in Vancouver, but that fork in the road happened twenty years ago, so it's impossible to figure out what would have happened.

I was aiming for one direction but I ended up in another. Simply put, I started writing screenplays because I was broke and could not afford camera equipment. These days everyone has a video camera on their phone, but in the early 90s, you had to have some cash (or at least a credit card) to buy a camera and film. Oh, yeah... film was expensive. Not to mention other equipment like lighting... because lighting is everything. Without the financial means to become an auteur film maker, I focused on the writing aspect and dug deep into screenwriting and humping shitty day jobs with the hopes of some day buying a camera. Well, somewhere along the way, I lost sight of the initial goal and ended up writing full time. Screenwriting was pushed aside for other mediums. Funny how life works out like that. You aim at one target and end up hitting the bulls-eye in another.

Today's guest on WTF Podcast is Richard Linklater. Marc Maron conducted a great interview with one of my favorite film makers... and one of the holy trinity of directors that helped give me the nudge in the right direction. Maron asked Linklater about his most recent film Boyhood, which was shot over 12 years using the same cast. That ambitious and arduous effort alone is worthy of an Oscar for best director. Linklater will get a nomination, but I doubt he actually wins because Hollywood is rigged and those fancy awards are bought/paid for behind the scenes. Linklater has never been one of those Hollyweird insiders and those fuckers like to take care of their own, which is why if Boyhood wins anything... it will truly be an upset. But hey, I love a underdog.

A great interview unveils a few hidden gems, and this one had a bunch. I never knew Linklater had earned a baseball scholarship... so now the re-make of Bad News Bears makes a little more sense (I still have not forgiven him for that... the original is in my all-time Top 10 films). He also had an coincidental six degrees of separation with Matthew McConaughey... because both of their fathers knew each and played college football as teammates at Houston in the 1950s.

Link to the WTF Pod with Linklater.

Here's Linklater's interview with Vice about the making of Boyhood...