"He's sweaty and smells like an Italian sandwich." - BG

I had been properly inebriated since 10:00am and partying it up at the Sports Book at Mandalay Bay gambling on pro football games for the bulk of Sunday. After a steady flow of alcohol all day and afternoon, I finally retreated to the poker room at the Excalibur for some action after dinner. I was seated at a $2-6 table right away. BG was sitting at a $1-3 table next to me and he had some issues with a foul smelling man sitting next to him. Other bloggers were sprinkled throughout the room.

My table was crazy. I sat down in Seat 1. The dealer kept making mistakes and he was having issues with a player in Seat 8. He was one of those young guns who watched too many episodes of the WPT and WSoP on cable TV. He wore headphones and sunglasses. He flung chips into the pot and acted like one of the members of the Circle Jerk Crew populated by Dutch Boyd and his merry men. He was giving lip to the dealer (who himself was not an American, Eastern European I think, and had trouble speaking English which caused some problems with one or two players) and the dealer had to "shhh!" the kid a few times.

If that wasn't enough, there was a local middle-aged woman in seat 6 and she was the most negative person I had ever met at a poker table. She was complaining about every little thing when she was not bitching about everything else... like the dealer fucking up, the idiot kid flinging chips in the pot, and especially at the two guys in seats 2 and 3. They were sitting next to me and I knew that they were Israeli. They spoke in Hebrew the entire time. I told them a few times (as did the dealer) that the rules were "English only at the tables." Yep, it was just like that scene from Rounders. They said they would oblige, yet still spoke in Hebrew while the hand was in progress. Here was the problem... they took the rule as this... "We won't speak about the hand in Hebrew but we can talk about anything other than poker in Hebrew.... even while the hand is underway."

It was semantics. They didn't think they were doing anything wrong. I couldn't tell if they were cheating or not. I don't speak Hebrew. But some of the other players were getting pissy... like the local woman and some Swedish guy in seat 5 table. His friend was in seat 7 and he decided that if the Israeli guys can speak in their mother tongue... we'll so could they. At that point, we have four players at the table speaking during the hand in their own languages... and our dealer who barely spoke English trying to do his job... and failing miserably at that while the WPT kid was acting like a tool and the grouchy local pushing off her gloomy disposition to the rest of the table. It was not a pleasant scene and I asked for a table change right away. I'm on holiday. I didn't need to deal with that crap. Later on (as I was leaving) I saw that -EV sat down at the same table. I warned him!

While I waited for my new table, BG and Grubby came up from behind me as I was dealt the Hammer. I showed them my hole cards and smiled. Nothing was cooler than getting the Hammer in Vegas with a fellow poker blogger watching. I raised preflop and got two callers, including one of the Israeli guys. The flop: A-x-10. I bet and the Israeli guy called (the Swedish guy folded). The turn was a rag and I bet out again. He called. On the river another ace fell. I bet and he thought about it for a while, then folded. He was on a straight draw** and missed. (**Grubby told me afterwards that he saw the guy peek at his hole cards... he had KJo.)

I promptly flipped over 2-7 and yelled "Hammer time!" as I scooped up my pot.

The local woman in seat 6 scolded me. "You raised with that hand? 2-7o? That's the worst hand in poker!"

I sarcastically quipped back with an elegant riposte and a big smile, "Really? It is?"

She wasn't digging my humor and folded her arms in disgust and said something under her breath. I heard her call me an "asshole" and a "faggot". I dropped the smile in protest of her uncouth vituperations and quickly fell into my confrontational New Yorker mode, "Excuse me, what did you just say?"

She didn't say anything and avoided eye contact as everyone at the table was watching me stand up to her.

"That's what I thought," I said a little louder as I slowed down in stacking up my chips.

"I am going to call you next time," the Israeli guy whispered to me in English.

"I hope you do," I whispered back.

Two hands later I found KK. I raised preflop and got 5 callers!! I had two callers all the way to the river (the Israeli guy and the local woman) and luckily no aces were on the board and I won with pocket cowboys. I could tell she was even more pissed when I glared at her while I slowly stacked up my chips.

"You still think I'm an asshole?" I muttered across the table in her direction. "Or how about a faggot?"

I was expecting the dealer to say something to me but he overlooked that. The local was steaming with anger on the verge of an eruption. By then a seat opened up at BG's table and I snagged it right away. He was playing $1-3 and had a much better crew, including two of my favorite cowboys that I met in Las Vegas.

Yeah, Shane and Cody, the Utah Cowboys, greeted me with giddy enthusiasm as I sat down. If you recall, Maudie and I took them for a few buck two nights earlier. They were drinking heavily and having a good time and still calling me, "New York".

"Hey New York! You can't go back home without giving us some of yer money!" Cody shouted.

"Sort of," she said, "it was my brother's favorite team. He's dead now. So I always root for them because of him."

"Thanks for depressing me, Buzz Kill. I came all the way out to the middle of the desert to forget my problems and troubles. And now I feel like shit for betting against your dead brother's favorite team. And if it wasn't enough some mean lady at my old table called me an asshole and a faggot for dropping The Hammer. I have serious self esteem issues and that's too much for me to handle in one night. By the way, I'm a big fan of your work. To this day, Teenage Tits Freak Invade Mars is my favorite porn movie of all time."

Around Midnight, Julie was hungry and came on over to the poker room. At that point, the table was getting a little stale. I decided to take a break and have some key lime pie at the diner next door while Julie ate a late night dinner. We almost contemplated hitting up a strip bar. I was in that post-drunk phase when I probably needed sleep more than booze. I should have crashed but rallied for a few more hours. We hopped in a cab and headed to Paris and we took a ride to the top of the Eiffel Tower. Julie got busted for smoking a cigarette at the top. I didn't know it was a no-smoking attraction. The view of the Strip is really cool late at night. 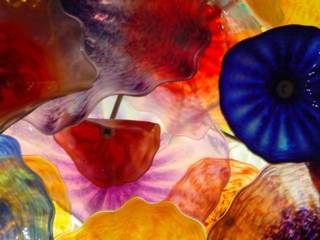 Afterwards we headed across the street to the Bellagio where I wanted to show Julie where the infamous Bellagio hookers hung out. She was interested after I told her about the short story I wrote that was inspired by true events. On our way over to the bar next to the poker room, I bumped into Chris "Jesus" Ferguson. He was without his trademarked shades and cowboy hat.

I shook his hand and he took a moment to say hello. That's another WSoP champ I met in Vegas and added to my short list: Scotty Ngyuen, Tom McEvoy, Phil Hellmuth... Greg Raymer & Chris Moneymaker I met at Foxwoods. I was kinda excited but Julie had no clue who Jesus was.

We finally sat down at the bar and I saw Freddie Deeb standing around a few feet behind me.

I ordered two imported draft beers and out of the corner of my eye I saw a call girl. A beautiful woman wearing a sleek black dinner dress that hugged her surgically enhanced breasts was sitting by herself at a table. I motioned to Julie that she should take notice of the lady of the night. Eventually the woman in the black dress sat down next to an older gentleman at the bar. They began talking over a round of drinks as he was welcoming her lubricious mannerisms. Bellagio hookers in action, right before our eyes.

That's when Bad Blood came out of nowhere. He had been playing at the poker room and we had no idea we'd run into each other. Again, that was one of the cool things about being in Vegas with a bunch of bloggers. You never knew you'd you'd bump into. We chatted for a few moments and he told me about spilling his drink at the table.

I wrote this down in my notes: Saw celebrities at the Beallgio... Bad Blood, Jesus, & Freddie Deeb. 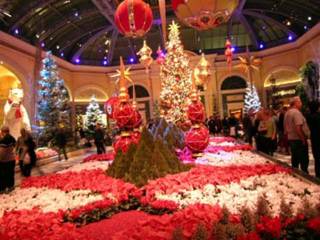 Before we left we took a quick tour of the Lobby to see the Dale Chihuly scultupre. And then the Conservatory & Botanical Gardens which was decked out in a Christmas theme. The aromas and fragrances of the flowers is very relaxing for me. Thanks to Grubby for the flower pics. 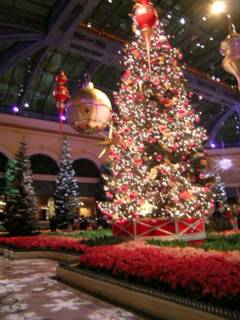 Upon my return to the Excalibur, Julie and I took a walk over to the poker room to see who was still around. During my stroll through the casino, I found Otis sitting by himself at a Pai Gow poker table sipping a beer. It was 4am and I decided to leave him alone. It's a guy thing. Sometimes, guys need to work out some issues on their own. Who am I to come between a man and his inner demons?

Here's the timetable of the rest of my trip reports:

And here are the ones I have already posted:

Derek finally posted some of his trip reports. Check those out.

As you can tell the timetable for my trip reports have been constantly changing. I have too much to write!! Stay tuned for more wild and wacky Vegas stories.
by Pauly at 1/11/2005 06:39:00 AM