I got my money on the home teams today. Road dogs won yesterday. You have to go with the Colts at the dome and the Packers in Lambeau. Weather is always my best friend in the NFL playoffs and it looks like there might be snow in Green Bay come kickoff time. Snow means the Packers will most likely win.
I'm staying away from the money line today. The Jets at +250 yesterday was a gift from the gambling gods!

Jets win in OT! Yeah, Gang Green got very lucky. History was on the Jets side. Marty Shottenheimer was 5-11 for his career in the playoffs. Chad Pennington elevated his game to a level we all knew he was capable of playing at. Hackett's play calling was definitely slanted towards more pass plays (and more play-action) and that was what the sputtering passing game needed. How about that flare up on the sidelines between Herm Edwards and his RBs coach late in the game? Heat of the battle. 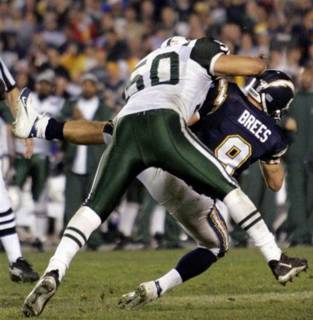 And yeah, I wanted to strangle Eric Barton for about fifteen minutes. And he had played great all year which was sad that the entire season (and his career) would boiled own to one cheapshot forearm to Drew Brees' head when the play was over. Barton got redemption when the baby-faced rookie Nate "Nick" Kaeding missed a chipshot FG in OT. At that point, I just knew the Jets were going to win.

All my keys to the game panned out which left the Jets victorious and put cash in my pockets.
I was impressed with a Jets road win in the playoffs despite a less than stellar game from Curtis Martin. There were plenty of mistakes too... like playing with just 10 players twice... and the Jets astonishingly held them in check both times. I hope that the Jets defense will get more credit now that they held San Diego to just two TDs in a playoff game on the road. 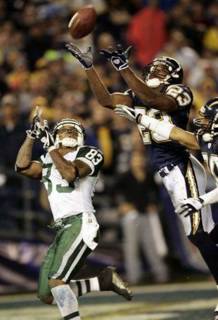