I don't believe in writer's block. It's a passive-aggressive tool that wanna-be writers use to illicit sympathy from non-artistic types. In college I used to feign writer's block when in all reality I was lazy or lacked motivation. 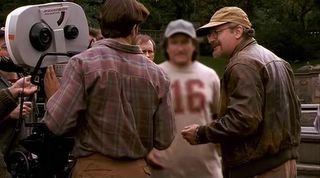 I woke up early on Tuesday morning to write and I noticed something. I kept pushing my start time back by fifteen minute blocks. Normally I gave myself a two hour cushion to wake up and do other things on heavy writing days. I check my email. Read ESPN.com. Listen to music. Get something to eat. Read up on current events or financial news for a little bit. Maybe even do a free write. That's been my pattern since I returned to NYC. Wake up by 6 or 7 and be writing by 9am.

I blocked off Monday to recover from the long weekend of partying and drinking. I also used the time to write up the Boathouse Bash reports. Monday went smooth writing wise. I found myself in overall physical pain from the weekend festivities. When I woke up on Tuesday something wasn't right. I eventually opened up Microsoft Word (and in a random tangent, I happened to know the guy who wrote the first version of Microsoft Word... Richard Brodie who's now a poker player. He's recently divorced and I tried to get him laid this summer in Las Vegas. It was the least that I could do since I penned my five novels and two screenplays using his program) and began writing.

The last two weeks were devoted to rewrites and knocking off 10% of the original manuscript. I'd actually say the real number is like 15% and I added 5% new material. The next two weeks are devoted to writing new material to make up for the 10% that got cut. I'm adding the hot sauce to the manuscript, as Nicky would say in Hollywierd terms.

And although I wrote a couple of pages, something was wrong. Flat. My mind was flat. My voice was flat. The ideas in my head were not flowing onto the pages in harmonious tones like I wanted them to. So I stopped and took a break. I returned after eating only to discover the same problem persisted. That's when I made the command decision to stop writing for the day and call it a loss. I lacked motivation. Physically and mentally I was not prepared to write creatively.

There's an old house one block away that got torn down. Derek and I used to make fun of the old ethnic guy who lived in the house. I dunno if his name was actually Boris, but that's what we called him. We used to play stickball in the playground across the street. Usually if you hit a home run to deep center field, you were going up to his house to fetch the ball. His house was located up on a huge rock formation so you had to stealthily climb a flight of stairs and look for the ball. Sometimes he'd come out screaming in his Slavic language.

Anyway, his house was over 80 years old and it got demolished to build a condo. Since they didn't have heavy rock breaking machines (aside from dynamite) in the 1920s, they built the house on top of the rock. Now the greedy owner of the lot wants to use that extra space so he hired a series of big machines to pound the rock out. They start digging every morning at 8am and don't stop until 4pm aside from a short break at lunch. A constant pounding sound echoes and I have to close the windows and crank up the music to drown it out. That sound never bothered me until Tuesday. I lost focus on the pages and words and allowed external noises to disrupt my writing rhythm.

I read for a couple of hours. Philip K. Dick. Lester Bangs. Chuck Klosterman. All great writers and I hoped to draw inspiration from them. No such luck. That's when I figured out that physically, I'm not 100% after the four day bender. I caught a head cold and suffered two wicked hangovers in the last few days and slowly understood that was the attributing reason to why I lacked focus.

There's a hilarious scene (see the above picture) in Woody Allen's flick Deconstructing Harry where Robin Williams plays an actor shooting a scene in Central Park. He was out of focus. His image in the film appeared blurry and it got worse during the scene. The director sent him home because he was out of focus. And when he got home, his wife and kids all commented on how bad he looked. That's how I felt.

I procrastinated, just like in college when I had a big test to study for or a paper to write. I made a list of projects that will start in October and one of those was eliminating material items in my life. I sorted through two boxes of old books and picked out ones I wanted to keep and put aside 30 or so that I want to sell. That took about two hours. I also threw out a crapload of boxes that were stacked up to the ceiling. I had shipped six or seven things from Las Vegas and LA at the end of the summer. Plus I got a ton of extra boxes lying around from books that I ordered or from random birthday presents. I tossed all of those in the trash.

I then went through my clothes and made a pile that I would donate to the church. I also made a pile specifically for the trash. I would not subject homeless people and the poor to my fashion faux pas from the last two decades.

I still had plenty of idle time. I jerked off, read blogs, then watched two episodes of Entourage. Then I started playing poker, which was a terrible idea since I got my ass kicked and dropped $300 in a couple of hours. I lost my voice at some point over the weekend. I think it was all the shouting and yelling over the bands at the Boathouse or all the blunts I have been smoking that made my voice hoarse. I finally had free time to talk on the phone but unable to speak. Irony kicked me in the junk one more time.

I took a Xanax on Tuesday night and forced myself bed early. I slept better than normal which I needed. Instead of 3 or 4, I got seven hours of straight sleep, which is a blessing for the ailing insomniac. When I woke up on Wednesday, the machines were blaring and I slowly made my way to the laptop. But I fucked off on Wednesday too. I only used up about 15% of my time writing. The rest was devoted to reading books, re-reading the first four chapters of JTSMD, and smoking copious amounts of pot while listening to the Black Keys, The Yardbirds, and Radiohead.