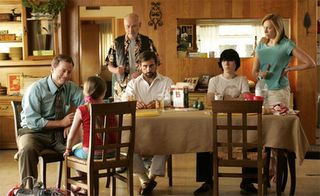 In the last few weeks, I finally saw a few films that I'd been wanting to see but never had the time to because of work. The locals' casinos in Las Vegas have movie theatres built in... so in one afternoon you can go eat a buffet, watch a flick, then play poker... without leaving the property. That's purposely done so you often find high school hooligans hanging around those parts of the casino.

I caught Snakes on a Plane and Clerks 2 in Las Vegas. I wanted to see Factotum, A Scanner Darkly, and Little Miss Sunshine, but those were sophisticated art house flicks that were not released in redneck surrounded and tweaker heavy Las Vegas. I had to wait until I headed to civilization in Hollyweird to see those two indie gems.

And of course, I was bored and baked to the tits one afternoon, so I fired up the boob tube in Nicky's apartment and watched The Island. I heard it was awful from both the critics and friends so I didn't want to waste my money on the rental. I watched it on cable because I actually like Michael Bay flicks and I want to penetrate Scarlet Johansen so viciously that her eyeballs pop out.

The Island is about clones (Ewan MacGergor and Scarlet Boobs) who think they are real people trying to win a trip to the Island... the only germ free paradise in the late 21s century. However, they were grown to harvest organs or make babies for wealthy clients who have no idea they exist. The evil bio-tech company that created clones for pro football players and actors said that the clones never reach an awaken state. There's the conflict. They do and eventually escape from the lab.

The ethical and moral undertones about cloning are interesting but that cerebral aspect of the film was never explored, instead the thinking man's sci-fi flick turned into a chase and explosion film. Scarlet Johansen's lips are ripe to the touch and every guy who watched The Island fantasized about her lips touching the tips of their penis no less than twenty-seven times. I guess that's why I sat through the entire flick.

My buddy Ferrari told me about Little Miss Sunshine directed by a husband and wife team of Jonathan Dayton and Valerie Faris. When I got to LA it was one of the first things I did. Nicky and I headed to the Grove to see it and I had to sit through and awful trailer for The Sleep of Science.

Anyway, Little Miss Sunshine features an ensemble cast who plays a dysfunctional New Mexico family who embarks on a roadtrip to take their daughter to a pre-teen beauty pageant.

Olive has one dream... to become Little Miss Sunshine. Her brother (played by Paul Dano aka Klitz from The Girl Next Door) is a loner who reads too much Nietzsche and took a vow of silence. Her uncle (Steve Carell) is a Proust scholar that just survived a suicide attempt after his gay lover left him. Her grandfather (Alan Arkin) is a grumpy old junkie who got kicked out of his retirement home for doing heroin. Her father (Greg Kinnear) is an unsuccessful motivational speaker. Her mother (Toni Collete) is bogged down with managing her eccentric family that seems to be drifting apart. The entire family jammed into Kinnear's ratty yellow VW bus for a roadtrip were hijinks ensued.

The writing by Michael Arndt was solid and the acting performances were stellar. The girl who played Olive stole the show during her dancing routine at the Little Miss Sunshine pageant. 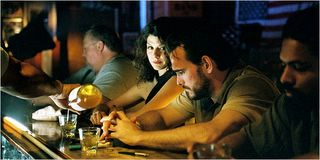 I was eager to see Factotum, a flick inspired and based upon Charles Bukowski's 1975 novel of the same title. A film like that was hard to come together in America. Alas, Europeans are fond of American writers like Bukowski, so the Norwegians took control and financed the flick. Bent Hammer who's also Norwegian also directed. Nicky and I headed to the Sunset 5 to see Factotum which was less than a mile from some of the dive bars in East Hollywood that Bukowski used to drink in.

Factotum shines the spotlight on an average guy's struggle against mediocrity. Matt Dillon plays Bukowski's alter-ego Henry Chinaski who's a low-life drunken poet that can't hold a job. The book mirrored Bukowski life in the 1940s and 1950s while he barely held menial jobs during daily drinking binges in LA dive bars. Factotum was set in present time and they changed locales... from LA to the sketchy side of Minneapolis.

Dillon jumps from crappy job to crappy job trying to do the least amount of work possible. He smokes and drinks on the job and doesn't even flinch when he gets fired. He lives in flea-infested flop houses and unsuccesfully sends out submissions to magazines while attracting insane women that he meets in urine-stenched bars where old drunks go to die.

Lili Taylor pulled off a remarkable job playing Jan the neurotic promiscuous alkie, who ends up giving Dillon crabs at one point. Bukowski liked the horses as much as he drank, and there were a few racetrack scenes with Fisher Stevens.

Mickey Rourke played Bukowski in the 1987 film Barfly. His version was a loud and rowdier drunk versus Dillon's more subdued, pensive, and outwardly depressed version of Bukowski.

* * * * *
Snakes on a Plane is an awful film but it's one of those that you have to see just for shits and giggles.

For a good laugh and plenty of cum-shit-druggie humor, Clerks 2 does not dissapoint, especially the rambling scene were Randal rails on bloggers. Hey I'm a huge Kevin Smith fan and he can't do no wrong in my eyes.

Since I consider Bukowski one of my influences and favorite writers, it's hard for me nt to recommend Factotum. Besides, after you see that flick, no matter how depressed you might be, you feel 1000% better about your job and your life.