It's a little strange what happened in the poker world the last few years, especially after the Poker Shrink retired, because I became the resident head shrinker at the WSOP. I was the on-site psychiatrist in the press box. It happened because I was one of the veterans in the industry with the most experience (and if I wasn't going through what they went through, I knew someone who was faced with a similar situation) and more importantly -- because I had access to a cornucopia of pills.

On a typical day at the WSOP in Vegas, I usually spent at least an hour talking to different friends and colleagues about a variety of topics. I mostly listened because most of the time, people don't want actually answers -- they just want someone to listen to them work things out in their head. More often than not, I dispatched words of encouragement telling them to focus on the light at the end of the tunnel. Unlike life, when you never knew it would end, the seven-week long WSOP had a finish point. So as long as I could get everyone focused on something positive, I felt as though I did my civic duty.

Part of me felt compelled to help friends and colleagues because deep down I wish I had someone to give me words of advice, especially when I was stuck in a rough spot. I had a few mentors along the way like John Caldwell and Flipchip, but never had a consistent go-to guy (or girl) that I could chat about my woes and fears.

Anyway, over the last few years, I found myself mentoring a couple of the younger writers/reporters that came through the biz. One of them, Chip Bitch, just graduated college. Our little side kick is all grown up now. He's come a long way from the days when he worked for peanuts (literally: zero dollars) and snorted crushed up candy for peanuts (literally: zero dollars). Chip Bitch posted something where he reflected on what it's like to be a college graduate and taking his first steps in the real world. He thanked a small group of my colleagues for keeping him on the right track over the last few years. Check out his post... Thanks.

I wanted to give him some words of encouragement in a comment, but realized I was getting a little too verbose, so I decided to post my thoughts here. Anyway, in honor of Chip Bitch, here's a list of 10 Things I Wish I Was Told When I Graduated College....

1. There is no permanent record...unless you count the Echelon project that has downloaded every single email, DM, text message, and whatever update you posted on Facebook.

2. No matter how much you've drank and no matter what you've ingested, smoked, or snorted... you CANNOT fly. 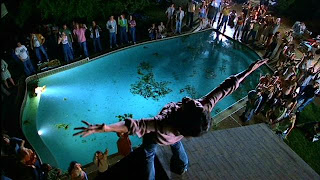 3. Contrary to what she said, she actually faked 98% of the orgasms.

4. You're professors drank as much, if not more, than you. Many of them we're popping pills... just before class.

6. Always wipe and stay off the (crack) pipe.

7. Avoid the shrimp and seafood in any buffet that cost less than minimum wage.

8. Read every day. Just because you're done with school doesn't mean you have to end your education. Your mind is a terrible thing to waste on The Jersey Shore.

9. As Polonious said in Hamlet, "Neither a borrower nor a lender be." Don't loan friends money. More importantly, credit cards are evil. If you can't afford it, then don't buy it. If you really want it, I suggest that you steal it. Whatever you do, don't charge it. Banks/credit card companies are more ruthless than the mafia. Don't become a debt slave.

10. People generally suck and will always let you down. Don't sweat the small stuff. Don't worry... just be yourself.