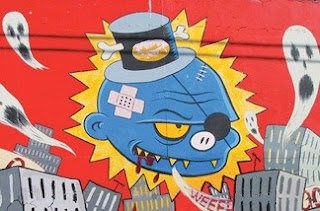 Several friends asked me when I was going to write lengthy diatribes about living in San Francisco. I appreciate the interest but I'm in "L-I-V-I-N" mode right now when I soak up as much experience as possible before I sit down, patch my bones, and write about the previous few months.

Soon come. The SF stories will be coming soon. But for now, here's a random tidbit that I acquired wile wandering around the dirty streets of San Francisco...

* * *
I was almost attacked by a cougar carrying a wicker reindeer. I had been holed up writing all morning and afternoon and needed a break. I went outside to grab a cup of hot chocolate from the corner cafe. On my way, I nearly collided with a peeved scion that almost gorged me with a wicker reindeer.

What the hell is wicker anyway? All I know is that you can't smoke it. I gleaned this intel NOT by personal experience, rather from someone I know who once attempted to smoke wicker. Or maybe it was marijuana soaked in PCP? I forget. Either way, wicker will not get you stoned.

Cougars, on the other hand, are detrimental to your health in Lo Pac, which is my nick name to Lower Pacific Heights. It's San Francisco's equivalent to Beverly Hills Adjacent or the Slums of Beverly Hills.

The coug bolted out of one of the many antique stores situated around the corner from my apartment. She was carry a big, white wicker reindeer with a nifty red bow tied around its neck. She screamed into her mobile phone and was too self-involved to see me as she stormed out of the store.

Cougars abound in my hood. In New York terminology, it's sort of like the Upper West Side meets Park Slope. Plenty of nannies pushing double strollers. Lots of tiny purse dogs shitting all over the streets with owners too lazy to clean it up. The filthy sidewalks are congested with 20-somethings in tight black yoga pants with pastel-colored yoga mats rolled up under their arm. Street parking is non-existent in the LoPac and Nicky is constantly fighting Lexus SUVs and Minicoopers for the last available spot.

I walk everywhere, but had a few close calls -- I was almost hit by a vehicle at least four times. Near misses. One scared the bejesus outta me. I lived in LA for four years and only had once close call in the parking lot at The Grove. But three months into San Francisco, and I've almost got nailed by four different SUVs driven my myopic morons on their phones.

That's nothing compared to the mauling I escaped on Divisidero when two yapping dogs wanted to go at each other. The female owners of the hellions were distracted multi-taskers -- a pair of hipsters: one a member of the brown boot mafia in skinny black jeans and the other was your typical neo-eco-crunchy trophy wife in the ubiquitous tight black yoga pants. Their purse dogs looked like over-sized rats. What have such tiny animals? Why not get a cat?

The women stood on the same corner, backs turned and about five feet apart from each other. The both talked on their iPhones while their respective dogs anxiously clocked each other. The tension thickened as I approached. I wanted to avoid the potential clusterfuck as the dogs snarled and growled at each other. A dogfight was nigh. Blood would be shed on Divisidero. Iconsidered whipping out my CrackBerry to record the fight -- but then I'd get hate mail from PETA for supporting cruelty to animals.

Instead, I foolishly tried to walk in between the distracted women at the same moment their dogs lunged at each other. The brown-booted hipster yanked on her leash and her dog yelped. The woman in yoga pants dropped her cell phone to grab her dog when it attacked the cuff of my jeans. That little fucker almost chewed up my Achilles.

Our downstairs neighbor has a big-ass dog. BIG. DOG. How big? It bangs up against the front door whenever someone is outside. The big dog scares the shit out of the mailman. Some of them are afraid to deliver mail. I'm convinced my packages are always late because of the monstrous, fear-instilling dog.
by Pauly at 12/01/2011 02:22:00 PM