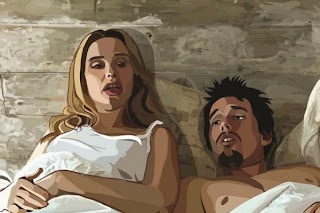 When I was in college, I saw two films that convinced me I wanted to become a director and make movies -- Richard Linklater's Dazed and Confused and Quentin Tarrantino's Reservoir Dogs. Both were young filmmakers who are still around making movies twenty years later. One went full-blown Hollywood, while the other retained his indie street cred.

After Dazed, Linklater made a sappy film about love called Before Sunrise. Typical American male fantasy -- boy (Ethan Hawke) meets a French girl (Julie Delpy) on a train in Europe and then bangs her in a park. The entire film took place in less than a day. Lots of walking and talking amidst breathtaking shots of Vienna. If anything Linklater captured the quintessential Gen X angst that washed over many of us in the bleak early 90s.

Nine years later in 2004, Linklater revisited those same two characters in Before Sunset. Yeah, he made a second film that takes place in a single day, but a decade has passed between the two original characters, who are walking and talking and walking through the streets of a majestic European city. That time it was Paris.

Flash forward nine years later. In 2013, Linklater released Before Midnight, which is a third film featuring the same two characters. Walking and talking. This time in the Greek Isles. As Nicky sad, "That movie should be called This Is 45."

I loved the first film. I was indifferent with the second one. But the third one hit home. I couldn't tell if I loved or hated it. If I wanted to see two adults having an argument about their relationship, then I would just videotape me and Nicky fighting about stupid stuff. Most people go to the movies to escape. But in that instance, Linklater sort of held up a mirror on the audience. Sure, it was hard for me to relate with the characters because they had kids and I don't. But since we're all roughly the same age, the other stuff about sacrifice, careers, and relationships really hit home. Hard.

We're not married in conventional terms, but Nicky and I have been together for over seven years now. Man, has it been that long? It certainly feels like a marriage. Anyone who's been in a successful marriage will tell you... it takes a lot of work and sweat on both sides to flourish and maintain a consistent level of happiness.... and even then there's no guarantee. With regard to 'friends', you can slack off for weeks, months, or even years... and not really tend to those relationships, yet you can still have a strong and unflappable bond. That doesn't quite work in long-term relationships, especially if cohabitation is involved. Sometimes it's easy to just switch on the auto-pilot and sleepwalk through life. But if you do that with your spouse or significant other, then you're setting yourself up for a disaster. Just because you're on autopilot doesn't mean you can't crash.

Anyone can get married. It really takes two dedicated, patient, and understanding people to truly make it work.

I expect Linklater to make another film in 2022 and by then the same characters will be 50 or so. And maybe a fifth film again in 2031... if they're all still competent actors and Ethan Hawke hasn't become a heroin addict and Julie Delpy is a pill-popping alkie lush.
by Pauly at 7/03/2013 04:20:00 PM