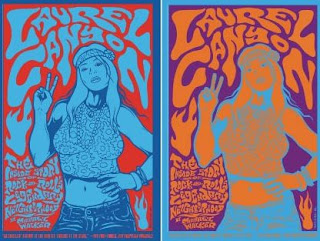 I saw Laurel Canyon: Inside Story of Rock-n-Roll's Legendary Neighborhood in numerous bookstores and airports over the years. It was hard not to miss the cover. I must've picked it up dozens of times and thumbed through it. I never bought the book. I didn't love the bands and musicians mentioned (I dug Neil Young and was curious about Zappa, but not so much the Byrds, Eagles, Joni Mitchell, Jackson Browne and Crosy Stills and Nash), so I always passed on it. But that was then. Over the last few months, I immersed myself in early 70s rock and roll. I blame the Eagles documentary for luring me into the scene. Once you do down the rabbit hole... you get sucked all the way through the vortex. I quickly realized that I was neglecting an integral part of rock and roll history. Even if I didn't like those musicians from that time/place, many of the musicians I do like were deeply affected by what was going on in Laurel Canyon in the late 60s and early 70s.

NYC, Detroit and Nashville were the music hubs for most of the 50s and 60s. Los Angeles was sort of an afterthought. It was so far away geographically and culturally from the music scene that it became its own scene. Nestled up in the hills of Hollywood, Laurel Canyon was nearly hidden to the rest of the city. It's its own wilderness.

By the early 60s, Laurel Canyon was a super shitty place to live. Most of the wealthier residents lived in different parts of the hills (like Benedict Canyon), so Laurel Canyon is where most of the kids ended up when they arrived in Los Angeles, paying cheap rents in dilapidated homes that many Hollywood stars and industry types lived in during the 20s, 30s, and 40s. Hippies flocked to the hills in the later part of the 60s and for a short time, Laurel Canyon became a utopia for music, peace, love harmony, and the epicenter for counterculture in Southern California.

Hardcored hippies lived in San Francisco. The kids who wanted to hit it big in the music industry gravitated to Los Angeles, the crossroads between art and commerce. Record companies were looking to capitalize on counterculture and if you were somewhat competent in the late 60s and early 70s then you had a shot at a potential recording contract. Back then, there was enough money floating around that any company will give you one shot... but that's what you got... one shot. Heck, even Charles Manson was vying for a record contract. When it fell apart, he went on his rampage.

In a short period of time, the denizen of Laurel Canyon became superstars. The first wave of fame hit the Byrds. The original line-up was short lived and David Crosby got kicked out of the band. They were the first batch of musicians to really strike it big and drive around in fancy cars. It seemed to be the antithesis of hippie counterculture... you didn't make art for money so it could be exploited by the man. But eventually the ethos of the 60s gave way to the indulgences of the 70s. Kiss acid, weed, and shrooms goodbye and hello cocaine Quaaludes, and heroin.

The book seemed like a long rambling commentary on the music scene, especially its favorite meeting place -- The Troubadour. The author purposely wanted his sentences to seem long and windy like the Hollywood hills. Along the way, some myths are debunked (like Mama Cass dying after choking on a ham sandwich) while others are glossed over (all the secret caves and tunnels that led to different mansions where supposedly occult rituals took place 20-30-40 years earlier). But the book is broken into two parts with the second part focusing on the darkside of cocaine. the guys in the hills were the cocaine cowboys. The musicians, like the Eagles, were raking in big bucks and blowing it all on... blow. Some of the best tracks from your favorite classic rock songs were cut while crocked to the tits on cocaine, but most of the band broke up because of problems associated with cocaine abuse.

Anyway... I finally found this book for next to nothing at a used store and picked it up. I finished reading it in a couple of days. The reading went quick, but I spent endless hours listening to different sounds and bands mentioned in the book. It's a nice walk down nostalgia lane, especially if you're someone who is a baby boomer and grew up listening to many of those artists.

If anything, the book made me realize that I'm living in L.A. in the wrong decade. Plus, I wish I could afford the rent in Laurel Canyon. I always thought it would be cool to live up in the Hills for a year or so and write a book. At this point, that's a pipe dream. If I had 4K to blow on rent, I'd sure as hell be moving to back to San Francisco, or could afford to live in Amsterdam.

The gang that did the Eagles documentary should do a 10-hour long docu-series (like Ken Burns' Jazz) on the Laurel Canyon music scene and then do another docu-series on the Bay Area music scene from the same era. I'd definitely watch that shit.