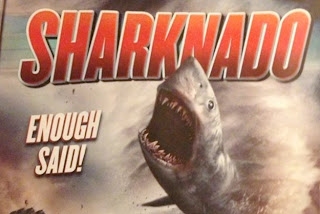 Approximately 33% of all tweets in America on Thursday night mentioned: "Sharknado WTF?"

Sharknado almost broke Twitter. I had no idea about it until I saw a lot of people discussing it. Well, fuck... if it's clogging up my timeline it must be important and significant, right?

Sharknado.... a tornado of sharks. A horrible B-horror film starring Steve Sanders from the original 90210 and Tara Reid. With the title, you know what you're getting. This is not some sort of naval gazing exercises with random shots of the ocean (I'm looking at you PTA)

Low budget. Most of the money went to hiring Ian Zering and Tara Reid, and all of that money was sent directly to Reid's plastic Surgeon in Beverly Hills and Zering's coke dealer in Silver Lake.

Mean Gene mentioned that Sharknado was a more popular topic on Twitter, more so than the night Bin Laden was killed. Welcome to... Zero Dark Sharknado. 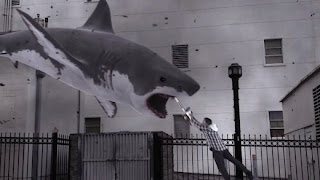 Sharkndao was an event made for Twitter. The stream was going so fast that you couldn't keep up. Thousands of tweets a second. The tweets were 10,000% funnier than the movie itself.

Movie was so bad... it's must-see TV. Like a car accident on the freeway. You know it's gonna suck is Tara Reid is in it (sure, she did two good flicks and wasn't a factor in either -- American Pie and the Big Lebowski). We didn't tune in to see her. We wanted a campy shark apocalypse.