A Cocktail of Optimism for Taylor Hicks 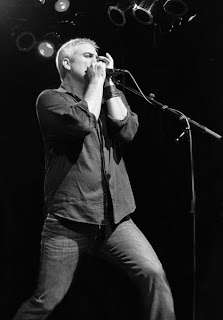 The mornings, well the pre-mornings, when everything is still foggy and its still a little dark out and there's the first hint of daybreak tearing down the edges of the sky. The stillness of the early mornings present the most promising moment of the day. It's when you're full of hope and optimism. Overflowing and overjoyed about the possibilities. It's because you forgot about all of the stuff that weighs you down and all of the bad shit that was bugging you out was momentarily erased from your memory banks. Eventually reality sinks in and you quickly remember everything you wanted to forget, and that optimism is shredded into little frayed pieces of pessimism until you make the conscious decision to ignore it.

Some mornings I'm staring at a picture, a signed picture, of Taylor Hicks playing the blues harp. For a two or three week period, he was one of the most famous people in America. But fame is fleeting. The southern guy with salt-n-pepper hair had a shot at winning American Idol many moon ago when the show was the most talked-about program in the land of the free. Hicks used up the majority of his fifteen minutes of fame with Idol. It was more like fifteen days of fame. I had seen him once before at the same coffeeshop while his star was rising and rising and rising. I guess he was staying in the general vicinity and liked the food. I know I do. Greasy spoon diners are getting harder and harder to find. Maybe the comfort food helped him feel a little more at home while he was basking in the ubiquitous sunshine and helping fabricate reality by being a main ingredient for the entertainment biz machine. I wonder if he knew that that moment in the photo was "as good as it gets" before he woke up one day in some generic, sterile motel room in the middle of nowhere, wondering where his entire career went off the rails.

I looked up at the picture of Taylor Hicks and got an unhealthy dose of reality. I was filled with optimism and promise until I saw the picture and remembered how brutal this town is for creative people. It swallows up more people every day and they disappear into obscurity while a fresh new batch of dreamers step off the tarmac at LAX, or exit the freeway. The minute they arrive is the minute their dreams start dying.

The mornings are always the most ambitious before I remember all of the bad, crusty shit that can drive you nuts... if you let it. I shrug it off. Most of the time, I'm teflon and just gut it out. Yes, the world is a dark, chaotic, and meaningless place but that doesn't mean I can't have a good time. There's a certain amount of safety in know all of this means jack shit. But every once in a while, I wake up with a glimmer of hope that's quickly shot down out of the sky like a paper airplane trying to win a dogfight against an F-15.

I woke up this morning and wandered over to the coffeeshop. Along the way, I saw an old Russian lady smoke a cigarette while scooping up a pile of shit with a plastic bag from Ralph's. Around the corner in the alley behind Jack in the Box, a homeless man bundled up in a blanket was trying to catch the last bit of shut eye before he was kicked out of the alley by the morning sounds of commerce, whirling leaf blowers and grinding garbage machines. At the coffeeshop, I could not stop looking at Taylor Hicks while I ate my pancakes. Sure, there were other pictures of actors on the wall. Some much more famous than Hicks will ever be. But they're not out on the road somewhere with a bunch of other burned out musicians completely weary and wondering how long they can stay awake before remembering about how miserable life can be trying to scrape together a paltry paycheck on the road and thousands of miles away from home.
by Pauly at 10/16/2013 12:34:00 PM