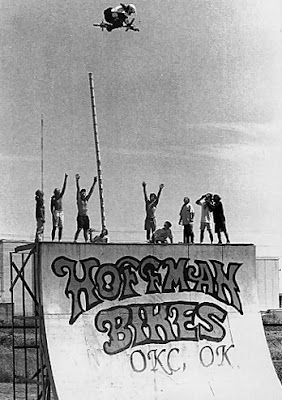 I caught The Birth of Big Air over the weekend. Yet another remarkable ESPN 30 for 30 Documentary about a remarkable story in the 1970s or 1980s that flew under the radar before the internet's explosion a few decades later, and way before the 24/7 sports news cycle took control of the airwaves.

The Birth of Big Air chronicled BMX legend Mat Hoffman. I grew up during the BMX craze but never really got into it as much as some other kids in the neighborhood. But it was short lived because most of the kids I knew jumped over to skateboarding after Back to the Future hit the theatres.

One of my friends, Scott, had a bunch of BMX magazines and I thumbed through them when I hung out at his house. Mat Hoffman was always pictured in the magazine doing a crazy stunt. I totally forgot about the BMX craze until I caught the documentary just as it was starting, and then got lost in nostalgia for an hour.

The Birth of Big Air brought back a flood of flashbacks about growing up in the BMX era. It reminded me of those halcyon days pre-Nanny State when kids could be kids and ride bikes without helmets. This was a time before all these shyster lawyers and rising medical costs kicked in and the government decided to intercede in day-to-day parenting, which took all the fun out of childhood.

Then again, I grew up in the Bronx during the crack invasion. I almost had my bike stolen twice as a kid and the second time was by a crackhead looking to make a few extra bucks by stealing my Mongoose knockoff. I think it's crazy to think that my parents would allow me and my brother to roam the neighborhood on bikes in the 80s... but that was the culture. All the neighborhood kids had to find someway to entertain themselves (pre-cable, pre-internet, and at the beginning of the video game era), which is why playgrounds and parks were filled with kids. Yep, kid being kids. My brother and I pedaled our bikes to Seton Park, where our Little League games were played. Behind the baseball diamonds was a hidden and makeshift area where kids rode their bikes and did jumps and different stuff. We spent hours and hours doing stupid shit back there and I rode all over my neighborhood and adjacent neighborhoods and learned every nook and cranny and street in my area of the Bronx. All of this was without a helmet. The older I get, the more I cherish those idle afternoons riding around without a care in the world and without Big Brother telling me how to protect myself.

The Birth of Big Air told the story of BMX pioneer Mat Hoffman. He flourished in obscurity of Oklahoma, whereas his contemporaries were mostly from Southern California, which was always a hotbed for extreme outdoor sports like skating and biking (and of course surfing). Hoffman had a "secret" practice space inside of a warehouse where he whipped up new tricks. All trial and error. Hoffman was the sports first mega-star before the scene fizzled out. By the time ESPN 2 created the X-Games, Hoffman was a dinosaur and could never really compete with kids half his age. Besides, his body was all banged up after all the hideous damage he put himself through over the years.

Early on in his career, event before he turned pro, Hoffman won over the respect of his peers, especially the pros from SoCal. Hoffman paid a huge price by putting his body on the line. He broke more bones than he could count and supposedly suffered over100 concussions. He busted his spleen and almost bled to death. Personal safety is something that he shrugged off because he was searching for the next big moment -- whatever that might be.

Hoffman got as close to flying that a human could get while only using a bicycle. Once he caught that "rush", he was hooked in for life. The hardest part about being an adrenaline junkie is that you're constantly seeking a new fix, but one that is bigger and more dangerous than the last. In the end, all it leaves you to do is jump off of cliffs and out of airplanes -- both activities that Hoffman accomplished later on in his life after he retired from BMX racing.

Underneath all the daredevil stuff, you got to hear the story about a guy who never gave up when he was told he couldn't do something. Hoffman persisted and pushed on despite the overwhelming odds and detriment to his health. Maybe he's reckless and a little bit crazy, but all you have to do is watch a few minutes of this documentary to realize that Mat Hoffman is the epitome of the human spirit. He lived a dangerous life but followed his dreams even though it almost killed him... numerous times, but we need people like Hoffman to test the boundaries of humanity and push the edge as far as he could take it.


What the entire doc here before the YouTube police yanks it down:

Email ThisBlogThis!Share to TwitterShare to FacebookShare to Pinterest
Tags 30 for 30, Documentary Films