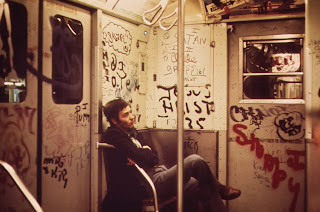 He played one of those cops from Barney Miller.

After sustaining a diet of coma-inducing, watered-down happy meals, life hit the skids. The ubiquitous greyness rained down. Sometimes it violently pelted the ground, causing divots the size of swimming pools.

Long days bled into endless nights, that bled into week-long blurs of sepia-tinged benders. Three and four day periods of vacant self-indulgence led to month-long gaps in time. Lost in a warp, a wormhole where ambition was strangled by the stillness of melancholy.

He was out on the street, or the street reached out and grabbed him. Hard to tell.

From the generous gestures of the kind-hearted, he'd collect sacks of old bread and could be found down at the pier feeding seagulls while sipping a can of warm Budweiser out of a torn paper bag.

Sullen groupings of sour notes played on a loop inside his head. Ghosts hovered like a polluted cloud of torment.

He knew he could never sustain the numerous trips to the hole. If you know where it is, then you're a rare survivor. The hole rarely releases anyone from its grip. Anguished visitors were lured in by an endless hunger, yet snared themselves in industrial fishing nets.

But like the rapper said, when your soul hits the bottom, it doesn't stop and keeps going and seeping through the cracks in the ground with the rest of all of the rotting waste. Your soul doesn't whisk itself away up into the heavens, it's a buffet for the worms while the rest of it leaks into the upper echelons of hell.
by Pauly at 10/10/2013 08:11:00 PM