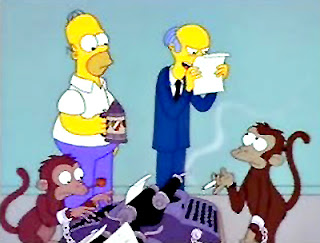 Malcom Gladwell came up with that number to quantify how long it will take someone to achieve mastery level of a specific activity, like playing the violin. I've watched 20,000 hours of pro football and I'll never figure it out. Just when I think I have a grasp on it... something happens.

But the spirit of 10,000 Hours is something I can get behind. It's all about dedicating yourself to something and having the fortitude to follow through. Even if it's a monkey banging away at a laptop.

I banged on a half a dozen laptops in the last decade and even persuaded enough people who would pay me to do something I was doing for free anyway. It's been a great hustle... content creation... while it lasted.

I doubt I can get paid as a writer twenty years from now, let alone two years from now, so I need a new racket. I'm developing a bot that can mimic my writing style and I'll just let that bot run amok in the upcoming years when I finally re-boot Tao of Poker. But in the meantime, it's time to lock myself in my office and rededicate myself to another pursuit. What can I accomplish by blocking out 10,000 hours?

Everyone has ideas but very few actually follow through. Hence, why New Year's Resolutions are bullshit. It's part of that quote attributed to Woody Allen about "90% of success is showing up." It's easy to talk shit and say you're going to do something. But you really can separate the movers and shakers from the shit talkers by seeing who actually follows through on their game plan.

Stephen King once said that if you write one page a day, you will have a novel by the end of the year. It was that simple. One page a day. One page fits into schedules for everyone. Students. Suits. Moms. Dads. Prisoners. Spinsters. Whatever. One page a day is not difficult, but it's the discipline and inability to follow through is what prevents more people from writing more novels.

I'm like Stephen King though because I could never spread out a novel over 365 days. It would drive me insane. That's why NaNoWriMo is more my speed. Only takes a month. Oh and for the record, I did not do any cocaine or Adderall during the completion of Fried Peaches. I was kicking it old school. Just toking a little medicinal weed. Since I wrote most of it early in the morning, I actually smoked very little. Just a quick wake-n-bake and I was off running.

There was a huge period of time in King's career when he was hopelessly addicted to cocaine and he'd write furiously while jacked up to the tits on blow and he'd only stop typing to do another line, or to shove cotton into his nose to stop the bleeding so his typewriter wouldn't get flooded by a bloody nasal drip, due to the horrendous damage he had done to his destroyed nasal cavities.

King even claimed that he had no memory of writing complete novels, like Cujo, because he was so high and fried to the tits.

Anyway, sorry for that tangent.... but if you listen to King and write one page every day, then by Halloween you will have a 300-page novel. You can spend the last two months of the year re-writing and editing, and within a full calendar year you will have produced a legit 300-word novel. And not one of those rushed, over-wordy NaNoWriMo novellas. Sure, I wrote a bunch of those 50K adjective-heavy manuscripts, but I have a short-attention span and don't think I could have enough discipline to write one page every day. Once I get an idea, I want to run with it as fast as possible before self-doubt catches up to me. It's a sprint to the finish line. Luckily, I was almost done with Fried Peaches when I finally got bum-rushed by doubt.

There's several major industries of the "self-help" variety that profit off of laziness. Just take a peek at the billion dollar weight loss industry, yet everyone is drastically overweight in America.

Everyone might have sincere intentions on shedding a few pounds, but how many people own gym memberships and actually go? It's a great hustle. Even one of the most popular TV shows is about people competing on a game show to see who loses the most weight. That's something that 1950s sci-fi writers could only dream up as the most absurd bit of entertainment, yet  a half a century later, The Biggest Loser is one of the top TV shows in America.

Weight loss is a coin flip. You're either going to do it, or not. Simple as that. Any diet will work if you stick to it. So any of those diets can actually claim they work... because it will, so long as you follow through. All of these fancy work out routines and diets are ways for slick hustlers to rake in millions of lazy people looking for shortcuts.

Same goes for religion and spiritual direction. Most of our consumer-crazed society has abandoned organized religion, which has left a huge gap in the spirituality department. People are left to find that out for themselves, but that makes them prey to a vast industry of self-help gurus. There's thousands and thousands of videos and books, yet everyone is still fucked up.

I just look around and think... sweet Jesus... we're totally fucked. Western civilization is being held together by duct tape and credit cards.

If you're someone on a true spiritual mission, you'll eventually find something... you'll find the right road, or the right path to what you think is your spiritual calling. In order to reach that destination, you really have to find our who you really are. It's that "know thyself" mantra.

The ones that can confront the truth, are the truly enlightened ones. But everyone who gets lost in the shuffle constantly trying to "find themselves" yet come up short? Well, they're full of shit because they fail to confront their true reality, so it's no wonder they'll never find what they're looking for because they refuse to acknowledge their own truth.

If you're blind to your own reflection, you're totally fucked and you'll live the rest of your life spiritually bankrupt.

I keep going back and forth deciding if I want to be one of those snake oil salesmen who profits off of the failures of others. It's good money to crank out one of those self-help books for wanna-be writers  that recycles basic (and so blatantly obvious) writing tips and fluffed up by witty quotes from philosophers. I'd feel guilty trying to sell a book that is the equivalent of feeding someone a cold buffet of fluff and tripe, but don't forget the yummy omelet station!

But it's all bullshit.

Because nothing I can tell people will help them if they are not going to put in the time. I also thought about writing a self-help book for wanna-be writers that was 20 chapters, but the title of each chapter is "WRITE EVERY DAY."

Etc, etc, etc. And if someone follows my advice and finally breaks through as a writer, then viola! It works. Who would have thought that I came up with a revolutionary method! So simple that any monkey with a laptop can do it.

I should release Pauly's Half-Baked 420 Writing Tips next October, just before NaNoWriMo so I can take advantage of all of those ambitious novelists. The number of participants is staggering. And then put it on sale around New Years, so people will buy it as a part of a resolution to write a book. Stephen King said it wasn't hard. Just write one page a day.

Seriously, if you put in time and write every day, then you won't need any self-help book. Sure, read On Writing by Stephen King, but that's all you really need and it's not really a self-help book as much as a guide.

The basic winning formula is just putting in the time, following through, traveling, and trying to life as much life as you can.

Success-driven people will forge on ahead no matter what obstacles are in their way. Doesn't matter if it's an Olympic bobsledder or a musician or an aspiring screenwriter. But there's tons of money out there by people with disposable income who are seeking shortcuts.

"Brain dead and made of money, no future at all" is a lyric from one of my favorite songs. Reminds me of all of the sheep who buy self-help books. But I have serious reservations about fleecing angleshooters and lazy fuckers who never saw a shortcut they didn't like. I dunno how all of these so-called religious leaders can live with themselves. I guess when you spend every day trying to brainwash people, it's pretty easy to get brainwashed yourself?

It's easier to con greedy people because their judgement is blinded by their own greed. It's why politicians easily manipulate the populous because there's no shortage of angry citizens who find comfort in blaming someone else for their problems. Today's politicians don't offer up solutions, they help point fingers.

If there's one thing I learned the most from working in the gambling industry for almost a decade, it's that I see so many people, year after year, who think they're hustlers yet they get into something only to find out that they got hustled. Best example are people who read HOW TO BEAT BLACKJACK books, then they go to Vegas and get cleaned out.

That's how Tommy Vu made millions with his real estate infomercials in the 1980s. You saw this eclectic Asian guy on a yacht surrounded by beautiful women and thought "I can attain the same success and all I have to do is call this toll-free number and find out how!"