The Return to the Big Easy 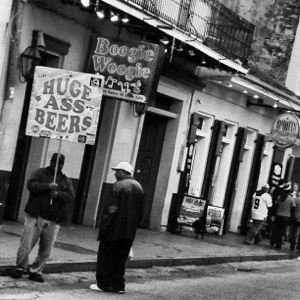 Feels weird to be back. But a good weird.

I had not been back to New Orleans since Katrina. Has it really been 10 years since I last roamed the streets of NOLA? I think Jazzfest 2003 was the last time I partied here.

For most of my 20s, New Orleans was my favorite city in America before it was overtaken by Las Vegas. But I've been burnt out on Vegas for a few years now, and San Francisco or Denver have been vying for my favorite city. But walking through New Orleans brought back a flood of memories.

I got hooked on New Orleans during my first visit in college, back when the drinking age was actually 18 and I didn't need a fake ID to get sloshed in bars for Mardi Gras. New Orleans was a quick 6-hour trip from Atlanta. Actually it is seven hours, but you get an extra hour due to the time change. I don't know how many times we made the sojourn.

When you're a young aspiring writer, you think about what will be your first attempt at writing the Great American Novel. For a few years, I thought I was going to write a manuscript about heading to New Orleans for Mardi Gras during my senior year in college. Seven of my friends chipped in and we rented an RV. Drove it from Atlanta to New Orleans, and then back to Atlanta with a sidetrip to Biloxi, MS for a little blackjack and poker. Much like the characters in Easy Rider, we were headed to New Orleans but really searching for a short cut to the American Dream.

The ride down was a little hectic. We had dropped liquid sunshine and a friend of a friend invited himself along at the last second. We only let him tag along because he offered to drive half of the way to NOLA. He drove fast, very fast, especially for an RV. My bud Dutch, who was in the middle of his Jim Morrison phase, was concerned about our lead-foot driver.

A RV blazing down an interstate in the deep south, filled with frat boys, weed, acid, and who knows what, was definite probable cause.

Dutch was concerned and rightfully so. We had a few extra doses on us and we made a pact that if we happened to get pulled over, then we'd take one for the team and eat the remainder of the doses, which were on sugarcubes.

At one point somewhere in Southern Alabama, we noticed flashing red and blue lights. Then the RV abruptly pulled over to the side of the road. Dutch freaked out. He thought we were about to get pinched. "We gotta do it," he said with his hands shaking as he pulled out the last of the sugarcubes. I ate two, which brought my intake to three since we had left Atlanta a few hours earlier.

It turned out that our driver had to take a leak, so he pulled over the side of the road to relieve himself. The flashing lights? Not for us. We ate the extra cubes for no reason other than sheer paranoia. We were tripping balls the rest of the ride to New Orleans. We must;e got in around 2am or 3am. I wandered around the French Quarter until sunrise before I was finally somewhat right. We ended up parking the RV in front of a church for the duration of Mardi Gras. I barely slept. Drank my weight in booze. And somehow won enough money in Biloxi to pay for the trip.

But that was almost 20 years ago. Memories run deep.

Al found us a quaint local's house to rent. It's in the heart of the Quarter and hidden so much so that it's easy to miss. Feel kind of cool not being in a hotel. No intrusive maids. No industrial soap smell. We can pretend to be locals. There's a corner bar on the corner, a few steps away. One of the oldest in New Orleans, one of the oldest in America. I have not drank much the last few months, but I have a feeling I'll make up for all that missed time over the next few days. At least rum is in my wheelhouse. I'm ready for a hurricane of Hurricanes.

But more importantly, I have all those memories and all those ghosts to keep me company. Anything that can jog and jilt my memory is a good thing. Especially considering how fried my brain was during previous trips. I wish I could write more, but it's time to lose time.
by Pauly at 12/04/2013 10:13:00 PM

Email ThisBlogThis!Share to TwitterShare to FacebookShare to Pinterest
Tags New Orleans, On the Road