Mama, don't let your babies grow up to be freelancers.

I sent that as a text to my pal Shamus, an English professor and fellow freelancer. He understands the vexatious financial ebbs and flows of being a writer for hire. It's important to love what you do, but no one likes it when you don't get paid on time. It's ironic that writers are anchored to deadlines, yet the mega-media corporations they write for often have zero regard for paying their creatives in a timely manner. If they're late, there's zero recourse. 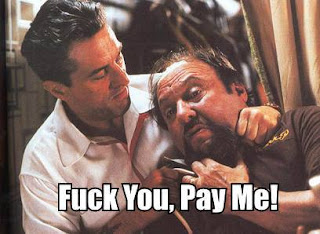 Hypothetically, in Norman Rockwell's Americana, the average citizen supposedly works for 11 months with 1 month off. Using that formula, I tried to game the system. I figured out how to squeeze 11 months of (freelance) work inside 8 months so I can get four months off to travel and write on my own projects. I'm struggling to maintain that balance, but I'm seeking a life of enjoyment without being a slave to it. My rough sketch is this: 5 months on (Feb-March-April-May-June), 2 months off (July-Aug), 3 months on (Sept-Oct-Nov), 2 months off (Dec-Jan). But those 8 months "on" are hectic, but it's worth the sacrifice. I'm fortunate that Nicky works on a TV show and she has time off when it's not in production, so some of our time off coincides with each other.

The key to freelancing is to do enough of it and spread out evenly so a steady flow of income is coming in. Steady gigs are essential, even if they're small because any consistent checks are a godsend during the lean months. I have a few stretches every year when there's limited funds coming in, so things get ugly whenever there's any delayed payments from other clients, especially with bigger projects.

I'm used to getting paid several months after I finish something. Heck, I went a decade writing without getting paid. That was miserable and I had to hump shitty jobs to keep a roof over my head and the Man off my back. But it often defies logic to do work (instantly published) with a deferred payment, but that's the system that's in place originally created in the print media paradigm.

Delayed payments are good because it forces you to stay within your budget because you constantly have a strained cash flow. You have "promises" of money coming in, but you cannot 100% guarantee to get paid, so you really have to live with what you got. If you get stiffed, then you have to hire a thug (aka lawyer) to get it back.

Most of the time you gamble as a freelancer, which you can afford to do with reliable and established clients. I know XYZ will pay me eventually, so I can spend this money now.

Sometimes it's a coinflip on whether you get paid on time. Chasing down outstanding clients is almost a full-time job. You have to be firm, but most of the time I feel less like a creative person and more like a bill collector. If you let them string you along, then you set precedent and you'll never be paid on time. If you bitch and moan too much, they won't hire you back. I had a few instances when I was threatened and essentially blackmailed for wanting to be paid. I don't write for those fuckers anymore.

In an era when it's getting harder and harder to get compensation for content creation, it's increasingly more difficult to get paid on time. It's easy to write, compared to the painful process trying to get paid. I rarely stress out about what I'm going to write, but I can't sleep when I'm wondering when the hell the money is coming in. I would never blow a deadline by 90 or 120 days, but you'd be surprised how long it takes to get paid in some instances.

Corporations and bill collectors don't give a rat's ass about what's owed to you. All they care about is what you owe them.

Most freelancers my age are paycheck-to-paycheck kind of people with car loans, credit card bills, and alimony/child support. I'm lucky because I don't own a car or have ex-wives/kids to support. But my friends with that burden have a hellacious life. No wonder writers are often heavy drinkers. Sweet liquor eases the pain of not getting paid.

Sure, I could use a credit card as a temporary loanshark until I get paid, but I'm already using credit to cover business related travel and expenses. If I don't pay that at the end of the month, then I incur interest. It might take several months to get paid, so many freelancers get screwed by credit card companies charging them juice. Good luck convincing any media outlet (especially if they are on the verge of extinction, or struggling to stay relevant in an over-saturated market) to pay for all your incured expenses, let alone credit card interest. So if you're like me and don't want the big banks to get free cash due to the bizarre "work now, get paid later" freelancer payment system, then you have to pay expenses out of pocket. In full. I want to stick it to the banks, but that kills my cash flow. Of course if I got paid on time, this would not be a problem.

One of the worst experience I had encountered happened while covering an event in London. I paid for the trip out of pocket with the intentions of acquiring several stories and selling them to multiple outlets. But that trip was a disaster and I had lost money on that gig due to ridiculous escalating expenses (hotels and shitty exchange rate of the British Pound at the peak of the financial crisis). It didn't help that I got paid significantly less from one client (they wanted more work for less pay), another client sold their site overnight (and the new corporate overlord didn't want to retain services), and another magazine rejected my work because I got undercut by a sleazy cut-throat hack who stole my column because she said she'd do it for 1/3 of my rate. Shit happens. That's the risk you take working for yourself. At least I got to take a side trip to Amsterdam with my girlfriend, which salvaged the journey.

Most of the time, expenses come out of the freelancer's pocket, so it's sort of an investment or necessary cost of doing business. It takes money to make money, right? If you must travel to get the story, you better earn back enough to cover expenses and make it worth your time. That's the biggest problem facing journalists today... there's not enough outlets willing to pay expenses for them to get a detailed story, whether it's the front lines of a civil war in Western Africa or an extensive investigation into the financial crisis.

I dunno about you, but I lose all ambition to sit down and crank out new freelance work when I'm not paid on time. It's difficult to motivate yourself when you haven't been paid. As a freelancer, you can never have a bad day at work because you have to be "on" all the time. In the 9-5 world,you can slack off and still get paid. You can never get away with that in the freelance realm. Then again, in the 9-5 world, it would be absurd to work more than a pay cycle or two without getting paid. I've had some clients in which I worked for free for almost a year before finally getting compensated. Either I had blind faith, or I was a fucking moron for doing that. That's why prompt payment is the supreme motivator.

It's not worth the aggravation to deal with perpetually late clients, yet I still lose sleep over it. Given the choice of writing for pay, or writing for myself, I've been consistently picking myself the last two years. So I better finish off Fried Peaches and get that new novel out to generate another revenue stream because it's been a pain in the ass relying on multiple corporations to pay me on time.

I burned out on poker and Vegas several years ago, because I was sick of the rampant unprofessionalism and tired of chasing down delinquent clients. The scumbag, lying asstards at Higher Roller Magazine still owe me several grand for content I generated in 2006-07! I'll never see that money. If you count of all the money that immoral "clients" like High Roller and other deplorable stiffed me on, that number would be somewhere between a WSOP Main Event buy-in and a new Toyota Corolla. Closer to the Corolla.

Imagine the frustration and anger seething through my veins knowing that I generated enough original content to buy a car... but there's no fucking car.

Don't get me started about how much bookies owe me. Of course, I gotta keep my yapper shut about that bad beat because I don't want to piss off the wiseguys and wake up next to a severed horse's head.

So, it's the end of the year and I've been banging my head against the wall trying to get paid from multiple clients. They will all pay eventually (with the exception of one outfit which I have no fucking clue is up with those shady mofos), but it would have been nice to get paid before Christmas.We'll see. Eight days away.

I'm not going to be exploited today. Fuck that. I'm gonna go work on Fried Peaches edits and write about how horrible it is to be a Jets fan.