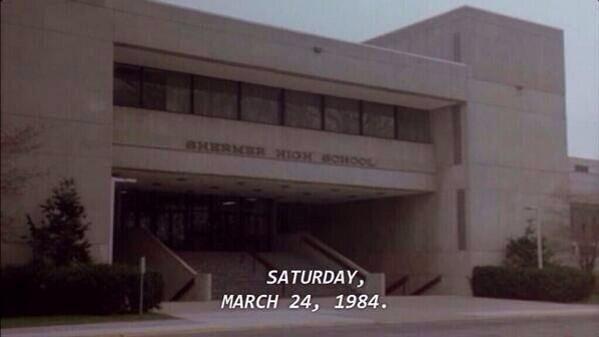 I saw the tweet from Molly Ringwald. It was the screencap above. The film The Breakfast Club took place 30 years ago. To the day. March 24th was a Saturday in 1984 and five suburban kids were sentenced to a day-long Saturday detention. Along the way, they realized they're more similar than the stereotypes that plagued the corridors of their school. They also realized they had a shared disdain for authority figures (like the detention warden and prick of a teacher), but they also had a special hatred for their parents.

The Breakfast Club focused on five archetypes... and did what they could to shatter those types.

In my grammar school, the bad kids referred to detention as The Breakfast Club even though it was held after school. I think there was one actual incident of Saturday detention and I'm pretty sure the film inspired that teacher to evoke that shitty form of discipline.

After I saw Molly Ringwald's tweet, I popped onto Netflix and discovered they had The Breakfast Club. The theatrical version, too. God knows how many times I watched the edited for TV version on TBS or some other sights when they poorly dubbed curses into circus-like replacements. I still say "Flip you!" from time to time as a tribute to the edited version of The Breakfast Club.

I think the film came out sometime in 1985. I was in between sixth and seventh grades. That was back at a time when it was rare to see a teen flick that did not have tons of tits and ass. Sure, it was a little too "talky" but not as absurd as the adult-like dialogue on Dawson's Creek. I picked up on a lot of things through The Breakfast Club. Most of what I learned about socialization skills, sex, drugs, and rock and roll came from TV and movies. So it was natural that I'd watch The Breakfast Club at least a hundred times before I even entered high school. When I came across other friends who liked to "quote movie lines", then we all realized that The Breakfast Club was up there with Fletch, Animal House, and National Lampoon's Vacation.

I learned the intro to "In-A-Gadda-Da-Vida", a song by Iron Butterfly, that the Bender character hums at the start of detention. I also learned clever catchphrases like "hot beef injection" and "neo-maxi-zoom-dweebie", both terms spawned from the sophomoric mind of John Hughes.

Judd Nelson played the Bender character. You know that guy. We all grew up with a Bender. The rebel, troublemaker, victim of child abuse, who took his misplaced anger out on the richer, more well-adjusted kids. Today he'd be a huge internet troll.

Judd Nelson never recovered from that role of Bender. He peaked way too early. He's been chasing his own ghost ever since.

In college, I explored the film stoned to the tits. Took on a whole new meaning. I probably saw it a few times since then... but I often turned it off and got irked when I discovered I was watching an edited for TV version. In high school it was almost comical to see how badly they tried to edit all the dirty parts, but as an adult I wanted the real thing.

It's funny that the teacher was proud that he made "$31,000." In today's dollars adjusted for inflation, that would be like $70K. Shit, teachers would be lucky to make that much!

Today? We're awash in nostalgia for previous decades, whether it's 60s nostalgia and Mad Men or 80s nostalgia with The Breakfast Club. The five characters were all different archetypes from my youth. Because we all went to high school, it was an experience we could all identify with.

Of course, there's the elusive "girl in black", who is the utter freak in high school, but she's the type of character that got me into deep trouble in college and my early 20s. There's a modern derivative of that girl in black today and I can only imagine how depressing her Tumblr page would be. I could write an entire novel about what happened to the sad girl in black and how she spawned two or three more sad girls in black.

The weed scene was also interesting then as it is now. The preppy girl got blitzed and realized popularity was foolish. The nerd loosened up. But jock boy went apeshit after hotboxing one of the rooms. Hey, a half of joint would never create that much smoke. Now, if all five of them blazed doobies at the same time, maybe they could create that milky white atmosphere. But not just one dude after a few puffs. So jock boy, who presumably is high for the first time, would not run around like a maniac. In reality, nothing would happen because you rarely get high the first time you smoke. So let's say jock boy did try it once or twice and was way past the first stage of Weed 101... it's hard to imagine anyone wanting to be that physically active. Then at the end of it, he screams so loud that the glass door shatters. Weed gives you incredible strength, speed, agility and the ability to break glass with your voice. Weed is like vocal steroids times a million. Wish it were really like that.

The weed scene was also cheap yet covert nature of product placement in films. The scene ended in with the jock taking off his sweat shirt to expose a tank top with a NIKE logo while he ran around the library. He could had a Chicago Cubs or Blackhawks shirt (like most jocks from the Chicago burbs might sport), or some sort of t-shirt with his school's wrestling logo on it. But nope... it was Nike.

The end scene was an emotional highpoint complimented by the perfect song. Simple Minds are still raking in dough for Don't You Forget About Me. It's what we played at my 8th grade dance.

The synth-heavy We Are Not Alone by Karla Devito plays as montage of the cast dancing around in the library. That's the scene everyone remembers and that was in all the trailers. You're supposed to look at that weirdness and melt for the 80s.

In the end... after an intense group therapy scene that reminded me more like an AA meeting... the message is clear... all of us are bizarre, but some of us doing a better job about hiding it. And that everyone has a streak of anti-establishment sentiment pulsating through their veins. We're all united by the simple fact that we all hate our parents. But then again, isn't that ironically mainstream since everyone has that same issue with authority and clashing against their parental units?