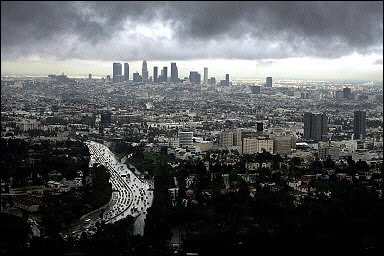 That's one of the first cliches I heard as a little kid. My mom used it to describe really bad, hard, fast rain that we'd get from time to time in the NYC area.

It never rains like cats-n-dogs in LA, but it's pouring right now in an torrential manner that would be considered cats-n-dogs territory.

Raining on and off last couple of days. Sunny SoCal is getting dumped on by Mama Nature. More like getting pissed on. Crazy shit, only crazy because it's rare to hear one of those emergency messages pop up on the TV suggesting we move to higher ground because of the rain. I live in the slums of Beverly Hills... so the higher ground is implied. It's the flash flooding and landslides you have to cope with. Heck, our alley had poor drainage and flooded a few inches in a manner of minutes.

California needed the rain. The state suffered from a terrible drought. Worst in decades. It's the first bad one since I moved out West.

Hollywood is a magical place where dreams are manufactured. Winters are non existent in paradise. The amazing (near-perfect) ubiquitous weather spoils so many denizens of Los Angeles, so anytime there's a hint of precipitation falling out of the sky, everyone FREAKS THE FUCK OUT for no reason whatsoever. All because little droplets of the water fall from the sky.

Sweet Jesus, Los Angeles freaks are fucking freaks for freaking the fuck out about fucking water, man. What the fuck?

Those Hollywood Freaks cancel plans when it rains. Seriously. They stay home and grind social media and whine incessantly about how it is raining, meanwhile everyone else in the country mocks them for being a bunch of wussies for getting all bent out of shape because of a little water coming from the sky.

LA Freaks stay home from work and they don't go out and watch local TV news delivered by spray-tanned, botox talking heads spewing fear and paranoia about the dangerous water falling from the sky.

The collective anxiety about the dangerous rain forces people inside and they order in take out food, so if you try to order food it will take three to five hours for your delivery to arrive. Sure, the roads are somewhat empty except tourists, drug couriers, rent-a-hookers, and other delivery drivers. But even the empty roads cannot overcome the redonk backlog of take out orders. Drivers are swamped with deliveries. To complicate matters, half of the delivery force is also freaked out and called in sick, because they're afraid of driving in the rai.

The city of wet angels grinds to a halt.

Those Hollyweird douchenozzles and sleazebuckets? They cancelled all their meetings and screenings and rub-n-tugs in Koreatown. All because of a little water. Maybe their souls are so marinated in evil that those greedy fuck-stains will shrivel up and die from those tears from heaven?

Rain days. Yes, that's what LA freaks do. They take rain days. Similar to taking a day off back east or in the Midwest when it's snowing (moderately). There is some legitimate concern and public safety issue when it rains for the first time in months with slick, slick freeways. So many accidents in the first few hours after a storm. Truly dangerous with oil and gunk accumulation.

Winter in LA is a joke according to my East Coast standards. There's really two seasons... the "winter" and the rest of the year. Nicky gets bundled up anytime the temps dips under 60. The winters in SoCal are super mild.

At worst, it's in the mid-50s and rains a bit in January and February. LA gets roughly 50% of it's rain (14.2 inches per year) in the first two months of the year. The actual rainy season is four months (Dec thru March) and LA gets 85% of its rainfall in the four month span.

Shit, it's been dry the last few months. That's bad news for farmers in the central valley. It's dangerous for potential brush fires up and down all those hills scattered about... all that prime real estate can go up in a flash. The reservoirs were low. SoCal's water problems have been well documented in Hollywood. Just watch Chinatown with Jack Nicholson.

Nicky gazes out her office window and sees the LA River (actually more like the viaduct you see in so many movies like Terminator 2). The good-old LA River was barely a trickle the last few months... until now.

The rain arrived. The freaks got more and more nervous and paranoid with each droplet. Hard. Rain. Hard. Buckets. Cats-n-dogs. Stream in my alley. It never rains that hard in SoCal. Yet... it happened.

Karl Rove's weather machine has been working overtime in 2014. I got fucked during the polar vortex at the start of the year and stuck in NYC for 10 days until I could finally get back to balmy LA. But no complaints right now. That rain freaks out my neighbors, but I love it. We needed it.

I crank out some of my best work when it rains. That's why I missed living in Seattle. It was always the absolute perfect writing weather in the 206. Something about the sounds of the keys on the keyboard meshing with the rain sounds. Fleeting moments of harmony. Rhythms of nature and that kind of stuff.

Noah Baumbach made a movie about me with his film Greenberg. Seriously. I'm fucking Greenberg... a moody New Yorker who is a fish out of water in LA, oh plus he doesn't drive. In Greenberg, the main character "Greenberg" plays a song for his brother's assistant Florence. He mentioned that LA-area DJs only played that song when it was raining. But at the time, the weather was its usual sunny self, yet Greenberg played the rain song anyway. Pretty obvious what's going on inside his twisted noggin. Although pleasant and sunny in real life, in Greenberg's universe, it's raining, which is why he's playing the certain rain song that ONLY gets played by well-adjusted disc jockeys when it's raining outside.

Sunny outside. Sunny inside. That's the ultimate goal (pursuit of happiness).

Rainy outside. Sunny inside. That's the type of people I like to be around.

Rainy outside. Rainy inside. Rainy all the time. I like to make my own rain. Makes me appreciate the sunny days... whenever they return.

Here is that little number by Albert Hammond... It Never Rains In Southern California....