School is back in session. You know what that means? College kids are back slacking off and hitting all my various blogs when they should be studying. Just when my web traffic began to trail off as people went away on vacation... it perked back up. I'm getting an influx of horny frat boys looking for naked pictures of various items like the latest breast upgrade of Lindsay Lohan or Tara Reid or artistic photos of Paris Hilton's shaved cooter. Plus there's plenty of pink clad, spoiled rotten, sorority girls stumbling upon the Tao(s) when they hit up Nicky Hilton designer purses into Google.

My stats have shown students from all over America are wasting their time with me. And I'm down with that. That's probably the last thing that my ego needs... a plethora of good looking, eager and impressionable minds looking for some sort of direction or worse, answers to unanswerable questions. At best maybe you'll get a laugh or two and the occasional poker tip on my sites, but I'll throw out my disclaimer quick and be done with it... by no means will you find any answers from someone else, and most importantly, there are no answers anywhere on the internet, especially on the Tao of Pauly.

An old friend once told me, as he was staring down the double barreled shotgun called stomach cancer, "Everything you've been searching for is inside yourself. Everyone's been looking in the wrong place."

It took my almost five years to figure out what the hell he was talking about. Sometimes, you just have to let go. Release your grip on so many things that you're afraid to depart with.

I can't however, get over Nicky Hilton marrying some Wall Street stiff. She was my favorite Hilton Sister. I like the quiet ones. I guess Paris is doomed to marry the junkie drummer of some whiney indie rock band from a town where they only get three days of sunshine all year. I think I've almost reached the sort of desperation that I'm willing to post a personal ad:

Junkie writer seeks rich women with multiple personality disorders and a trust fund to share sunsets, drinking before noon, and monthly trips to Vegas. Must be able to read at the minimum, a 6th grade level.

There's one gal out there who's been boozing it up in NYC bars. She's also a foul mouth blonde, who did more drinking in college than her old man... and that's everyone's favorite First Daughter Jenna Bush. 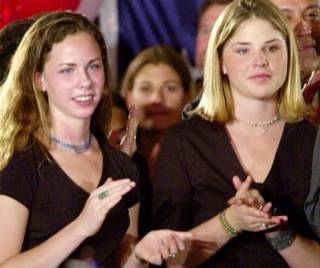 OK, I know I said I like the quiet ones. And Jenna's saintly twin sister Barbara (aka Babs) is probably more likely to discuss German Existentialism than knock back shots of SoCo at Happy Hour with Al Can't Hang... but everyone loves to party with feisty Texas blondes. And Jenna, that girl knows how to party.

There are dumb ass people out there. I shall cite an instance I had a few weeks ago here in NYC. I went into one of those huge retail chain drug stores and I grabbed an Orange Gatorade. It was $1.19. I saw a sign for sixpacks: $5.99. I waited in line for at least ten minutes and when I got up to the front, the young check out girl with two inch long thin, bright blue nails scanned my Gatorade.

I ordered her to scan it again. She gave me a look like I just kicked her dog. She makes $6 an hour... and her job is to scan items. Just five years ago, she had to actually read the price tag and enter the prices by hand. And that was one of the most difficult jobs in America having to work under such horrid conditions. Thank God for price scanners which reduced checkout clerk's workload by a staggering 33%.

"$6.33," she smugly answered after she scanned it one more time, motivated more to prove me wrong than to assist a customer.

"It's wrong. Computer is fucked up. Just manually punch it in."

She wouldn't move. I guess the training manual never covered that part of pricing disputes. I attempted to appeal to her senses as a consumer.

She stood there speechless, holding my Gatorade in the air. I whirled around and apologized to the long people in line behind me. "They're trying to rip me off and charge me $6 for a Gatorade. And Hot Nails over here has no clue what to do."

In true NY fashion. No one in line blinked.

"Keep your $6 Gatorade. I know it's asking you a lot to actually have to do some real work and punch in $1.19 into the register. You know, I've never met you, but it's that sort of laziness that will have you knocked up with three kids in the next five years."

I walked out of the store. I rarely treat service people with disdain, but laziness and stupidity set me off.

Bronze Is for Losers

And don't get me started about the dismal performance of the men's basketball team at the Olympics. We sent over professional players and we got spanked. In other countries, if you humiliate your homeland with a poor performance, who get whacked. In the World Cup soccer match, US beat Colombia 1-0 by a mistake from a Colombian player. He kicked the ball into his own goal my mistake. Within a week after his return to Bogata, he was shot dead. When Iraqi athletes failed to perform well at international competitions, Saddam's son, Uday, routinely tortured the players, and in a horrifying manner went after their families as well, often killing relatives and raping their sisters when in reality, the athletes did their absolute best. I'm not calling for any sort of violence among the NBA players and coaching staff who failed to deliver a gold medal. But someone has to call them out for their ugliness. They should be ashamed of themselves. They dishonored America and the sport of basketball. They should banned from the Basketball Hall of Fame for that unacceptable performance. I've been seething for days since they lost to Argentina.

And yes, the new issue of Truckin' is out. You can finally read all about the infamous puppy story.

Anyway, I told Al Can't Hang that I would update all four of my blogs within a 24 hour period. I think I did it all within 30 hours. Blogger was fucking up yesterday. But I finally published the new issue of Truckin'. In addition, I penned a solid entry to the Tao of Poker...

During my epic quest to pen the first great American novel of the 21st century... rarely do I blankly stare at my computer screen and mutter, "What the fuck?" That's the sort of rhetoric reserved for the lunacy that ensues when some crotch scratching nitwit from Altoona pushes his stack all in with bottom pair and catches a backdoor flush of running diamonds against my flopped Broadway straight.

And on Sunday, I updated my poli-blog This Side of the Truth with a little rant on Sudan.

It's time for me to pass along the horrifying word that there is a living hell on Earth... and people are dying under a dark veil of brutality every few minutes in Sudan. The sad thing is knowing that it will continue and no one on this side of the ocean is doing anything to stop it. How could busy Americans take time out of their day and focus on something aside from the Election, or the Olympics, or the Kobe Bryant rape and Scott Peterson murder trials, or the upcoming season of The Apprentice, or what brand of orange juice J. Lo drinks on Sunday mornings for brunch while on vacation in Bermuda?

It feels good not to have a deadline looming overhead. I never realized how much I wrote until I took off this summer on various trips to follow Phish and the Dead and to Santa Fe... and returned with a backlog of new adventures to scribble down, in addition to keeping up with all my internet writing. I am starting to be concerned that in the future my internet ramblings will slowly trickle down not because of integrity and artistic issue... but out of the simple reason, I just don't have all the time anymore to devote to endless hours in front of the computer coding and writing for my blogs. I get dizzy enough playing online at Party Poker for four straight hours that some days I don't want to be near any sort of technological device. Maybe that's the part of me pushing myself to gain more independence from being a slave to computers, the internet, cell phones, and the like. I started remembering all the phone numbers I programmed into my cell phone and other necessary data that I stored on my hard drive. Now I won't feel like a complete idiot when someone asks me for my cell phone number and I have to pause to check and look it up.

Anyway, I've been writing a ton the past few days. Here's the line up of poker playing and writing music since I've been back to NYC: