Editor's Note: I published this entry to my poli-blog This Side of the Truth. Check it out for election coverage and on other things randomly related to politics.

The most liberal city in the world was prepared to have thousands of ultra conservatives and moderates flood the streets. Security began months before the Republican National Convention kicked off when the surrounding area of Madison Square Garden became fenced in with a swarm of security details in place; antiterrorism units with all types of chemical detection devices, bomb sniffing dogs, video surveillance, and sub machine guns. As the Convention drew closer, the streets were sealed off, backing up traffic, and forcing commuters to alter their work schedules. Most New Yorkers, already fatigued after 9.11, post 9.11 lockdowns, and last summer's blackout were not in the mood for another headache. New Yorkers scheduled vacations for the last week of the summer while others chose to stay take off from work or work at home to avoid Midtown altogether.

There a site called NYC Indy Media and they have excellent coverage of the other side of the convention that the alphabet news networks are not showing you. In particular, Photo summary of A29 is a visual doumentation of the Sunday march in the city which drew more than a half a million people from all walks of life. Here's a bit:

500,000 people marched in solidarity with the rest of the world, denouncing policies of the U.S. government from every possible angle. After a 6-hour long march, protesters did not just pack up their signs and go home. Various autonomous contingents sprawled out across the city, doing everything from a "kick the heads of state" soccer game in Central Park, to jail solidarity demonstrations for those arrested, to a relentless verbal assault campaign on Republican delegates trying to hide out in Broadway theaters. "Republican scum! Your time has come!" was a chant that could be heard up and down the avenues this afternoon. 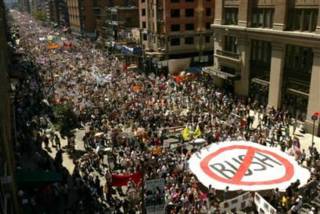 A bird's eye view of the protest.

The only people wandering the streets were either out of town delegates... aka Happy Republicans or bitter, angry protesters, which gathered along the fringes of the most secure place on the planet. While the majority of the antiwar and anti-Bush Junta folks protested peacefully, a few rotten apples were arrested for various infractions of the civil disobedience type, including heckling and taunting delegates and staging die-ins around Herald Square and on Broadway. I'm all for protesting and speaking out against the Man and the suits in charge. But why do a few anarchical idiots decide to blatantly flaunt basic rules of public safety and cause melee with the police? For what reason? 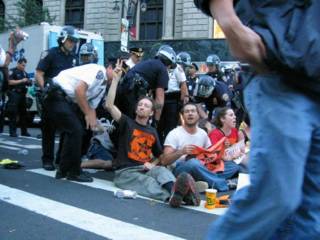 Those nimrods represent a small minority of protesters, and unfortunately for the serious-minded and politically active Americans exercising their freedom... the anarchists are the ones who get most of the media attention and indirectly are responsible for attributing a bad image of protesters. Some folks are just looking for trouble and their screams of anarchy and destruction often drown out the sane, intellectual voices calling for a radical political change in our country. The result is that the media and law enforcement unfortunately often group anarchists and protesters into the same lot of societal degenerates. 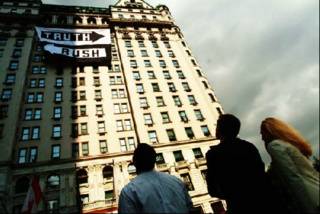 Protestors from Operation Sybil unfurled one of many anti-Bush ads.

Despite the heavy blanket of security and a sea of angry protesters sprawling through the city streets, the RNC took off without any problems. And in just the first two days they came out swinging for the fences. The first day was highlighted by speeches from both Senator John McCain and Rudy Giuliani. McCain's speech was slightly subdued but he spoke volumes. He outed Michael Moore and trashed his credibility as a film maker. He was respectful of his friend, John Kerry, and did not bash him like plenty of the other lesser known speakers. However, McCain made it clear that our President was someone who has been tested in war time and has not flinched at making tough decisions.

Of course the GOP didn't pull out any stops. They paraded a slew of 9.11 widows who briefly recanted how their lives have changed since the last election and how they felt the Bush administration will be the best choice to insure a safer America. It was moving and touching and I don't think too many swing voters with eyes filled with tears were not compelled with their speeches. With Kerry shooting himself in the foot by having his campaign's energy focused on Vietnam the last few weeks, those sad stories from 9.11 widows certainly gained the attention of NYC and Pennsylvania swing voters.

Monday night was highlighted by former NYC mayor, Rudy Giuliani, in one of the best speech performances I had seen from a politician deliver in over a decade. In a forty minute speech, he weaved his support for George Bush with his disdain for John Kerry, in addition to reminding everyone that he too, barely survived 9.11. He brought the crowd to it's cheering feet when he described his emotions and feelings minutes after witnessing someone jumping from one of the burning towers, and he grabbed the police commissioner's arm and uttered, "Thank God George Bush is our President."

The GOP was trying to making two things very clear. Firstly, that George Bush made tough decisions and is looking our for the safety of Americans by an aggressive proactive approach to modern warfare, while secondly John Kerry was waffling back and forth in debates and votes. And the point being hammered into everyone's living rooms by Rudy was pretty clear: "John Kerry's record of inconsistent positions on combating terrorism gives us no confidence he'll pursue such a determined course." 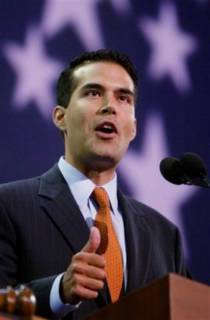 Tuesday was the big night. Both Arnold and Laura Bush were scheduled to speak. Before the heavyweights came out, George P. Bush, the son of Florida Gov. Jeb spoke briefly. His mother is Mexican-American, and he's the guy who's going to deliver the crucial Hispanic and Latino vote, who in the last two elections had been moving over towards the Republican Party, mostly on religious issues like abortion. He is supposed to appear in several Spanish speaking TV ads, stumping for his uncle. And yes, George P. could possibly be our nation's first interracial President two decades from now.

Arnold was there to get the couch potato vote and to drum up support with carious immigrant communities. He harped on his childhood and how he witnessed the horrors of living under Soviet occupation. 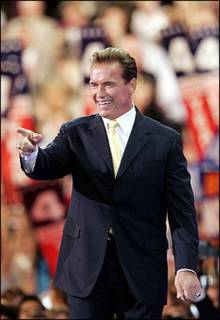 If I was born here, I'd already be your President!

Arnold in many ways epitomized the American Dream for many people living abroad. He didn't speak English, but came to America, worked hard and became rich. His appeal to immigrant voters in California should translate into some more votes nationally when he hits the road and campaigns for Bush in the upcoming weeks. Of course, Arnold threw out his cheesy catch phrases from his movies. George Bush will terminate terrorism. America is back. And he loved every second of the spotlight. He was a huge pick up for the GOP... a high profile Hollyweird type who's not bashing Bush, and speaking openly to new citizens in America how the Republican party is for them. He was the highlight of day two for sure.

The Bush twins, dubbed Twinkle and Turquoise by the Secret Service, have been campaigning for their father in this election. Ever since one of the Olsen Twins went into rehab, and after Nicky Hilton's recent marriage... the Bush Twins are the hottest party sisters on the circuit. Party Girls is a comprehensive atricle about the First Twins in NYC, where they have been seen at luncheons with their grandmother Barbara Bush or at late night clubs downtown schmoozing and boozing with the younger delegates.

They followed up an impressive speech from Arnold with a few minutes of really bad jokes, even poking fun at the Kerry daughter's hamster joke. They were cute and Jenna stole the scene. The blonde really wants to be an actress, and the speechwriters gave her all the one liners. Barbara, the straight one, was more laid back and sincere. She painted the behind the scenes family aspect of the Bush Junta. I guess Jenna's just like her old man; the guy three sheets to the wind with his pants around his ankles and the lamp shade on his head, and Barbara takes after her Mom; the quiet, reserved, well read librarian. They introduced their father via satellite from a softball game somewhere in middle America. And that's when he introduced the First Lady, Laura Bush. 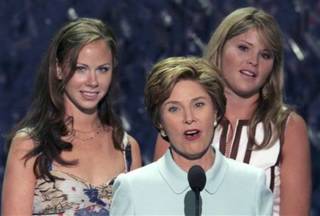 Bush Twins with their Momma.

Laura was there show a softer side of her husband, the President. She spoke openly about how he grappled with the decision to go to war. She also said, "I want to talk about the issue that I believe is most important for my own daughters, for all our families, and for our future: George's work to protect our country and defeat terror so that all children can grow up in a more peaceful world."

She was sincere and spoke with a semblance of Texas sensibilty and that for some reason is why I like her better than Mrs. Ketchup. Tonight, Georgia Senator Zell Miller, Dick Cheney and his wife are the notable speakers.
by Pauly at 9/01/2004 08:27:00 PM