I needed a couple of pictures for a post that I was writing for the Tao of Poker. During my search through my past, I sorted through two banker's boxes filled with pictures dating back from college. During a three hour period, I was bombarded with flashbacks. I was in hundreds of pictures. Some I recall taking and other memories are a blur.

The ones that hit home the most are from the ex-girlfriends. The ones in college seem a distant memory, but seeing images of the girls and women I dated in my 20s was a lot for me to handle. This was in an age before digital cameras and I have dozens and dozens of those white envelops from the film developing joint filled with old memories.

Sabine was the French artist. We took pictures one afternoon about 10 years ago. I was working on Wall Street at the time, and we were in the middle of the last spurt of our relationship. We dated on and off for a few years and those pictures represented the last time we were happy together. It was the dead of winter and she met me for lunch on Saturday on one of the coldest days of the 1996. She had never seen my office, so I took her upstairs and she finally got a visualization of "the trenches" that I often spoke of. We headed downstairs for lunch and she was bundled up in a thick woolen green hat with a matching scarf as we walked the near empty streets of Lower Manhattan. French women are fanatically infatuated with scarves and the one Sabine wore stood out. I know it was ten years ago, but I'm still awestruck by the vibrations of that shade of green scarf she wore. I can barely recall the contours of her face or what she used to smell like, but that scarf continued to make an impression on me.

We asked a tourist to take our photo as we sat in the square right in front of what used to be the World Trade Center. I also snapped random pics of the Twin Towers. That was a difficult set of photos to get through. Not only did Sabine break my heart and shatter it into several thousand jagged edges, but I was reminded by the horrible acts of 9.11. People jumped from 100 stories up to their death and landed a few spots from where we were happily sitting. I plunged into a pool of sadness and despair after sorting through those pictures of Sabine.

Lene was my roommate in Seattle. She had purple hair, loved Thai food, and listened to indie Seattle bands like the Supersuckers. We starting sleeping with each other, unknown to the entire house of seven other housemates. After midnight, I'd sneak through her window in the basement apartment and escape before sunrise. When I moved back to NYC, she was in the middle of switching jobs. She was a political activist of sorts and took two or three weeks off to drive cross country with me. She made that epic roadtrip where we drove from Seattle through Wyoming and St. Louis then down to New Orleans, Biloxi, Hilton Head, Savannah and DC before reaching NYC. I smiled when I glimpsed at a photo of her collecting seashells in her shoes as we walked along the beach in Hilton Head Island, South Carolina.

Sookie sat on my bed in my old studio plugging away and writing something on her laptop. She had no idea that I took her photo. That one in particular is black and white and ads a timeless quality to. Very few people I have met in my life could ignite the creative spark in me like Sookie did.

The photo of Angela was taken somewhere in California in the parking lot of a Phish show. She was holding up a veggie burrito in tin foil trying to sell it for $3. She spent the morning and rolled her own, hoping to sell enough to earn money to help cover gas expenses. Her hair was tied up in a Librarian's bun and eight or nine piercings were visible on her left ear. I forgot she used to wear so many earings. At the time the photo was taken, I never thought I could be more in love with someone.

Of course there were pictures from epic overseas trips that I took which included following Phish in Japan and going to Iceland with Senor. I had pics from fraternity formals, drives down the Pacific Coast Highway, from my porch in Seattle, and random pics of partying with friends in Brooklyn.

It was an emotional three hours digging through those boxes, opening up old wounds and falling in love again with the life I used to lead. And the places I used to live. And the friends I used to party with. And the women I used to sleep with.

Since I've been living out of my suitcase/backpack for the last 18 months traveling all over, the only material items I have are what I can carry with me... and those are very few. The rest of my life... my past... has been boxed up and tossed in the corner stored with old CDs, books, and paintings. I don't take those boxes of memories on the road with me because it's too much for me to carry. The emotional weight of all those photographs combined would equal forty thousand elephants. No person is strong enough to walk through life with such a cumbersome burden on their shoulders.

It is what is was. The past is the past and does not exist anymore, unless I allow those fleeting memories to linger in the present.

I found this pic which I liked enough to post, because I have hair in the photo. Lots of it. It was taken by Lene in a random bar in New Orleans. 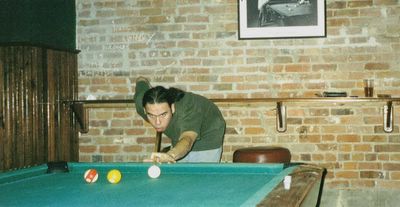