I spent Sunday and Monday watching about 10 plus hours of Band of Brothers. The History Channel showed the entire series in honor of Memorial Day and I caught most of it over two days. That's an amazing story and although I've seen it a couple of times, I still enjoy every moment of it. Major Dick Winters, one of the many soldiers chronicled in the made-for-cable series about the fighting done by the 101st Airborne during WWII, has a new book out and I've been looking for a used copy online. I'd love to read his first hand account of what went down during his time overseas. 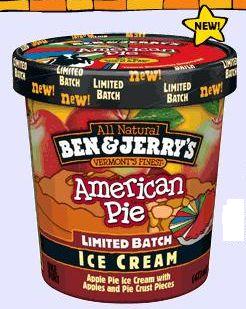 By the way, I'm totally hooked on Ben & Jerry's American Pie. It happened this weekend with a small taste. Now I'm a full blown junkie. It's a limited edition flavor and Derek stumbled upon it last week. American Pie is an amazing mixture of apple pie ice cream filled with chunks of apples and pie crust. I'd like to have cherries added.

On Tuesday, I woke up at 6am. I set my alarm and snoozed until 6:09am before I got up and hit the shower. It was only a few moments after sunrise and the humidity fought through the small crack in the window that I left open from the night before. After twenty minutes I realized it was simply going to be one of those hot and sticky NYC days. Sitting in just my boxer shorts, I began my daily writing workout. Like a marathon runner, there are days where you don't want to get up and train. This instance, I had no problems getting out of bed. I couldn't wait to sit down and start typing.

I popped my allergy pills and washed it down with a glass of Orange Gatorade before I put on a John Coltrane and Thelonius Monk CD at low volume. I was ready to let my mind take a huge shit onto my Word document page. And you know the best part? After I wrote for an hour, I deleted all my work. I must have got out close to 2K words many personal thoughts and questions I had about myself. Writing is amazing therapy for me and I must have saved thousands of dollars on psychiatric fees by simply digging deep into myself and writing about my life instead of paying some overpriced head shrinker to sit down and pretend to listen to what I have to say before pumping me with mind-frying drugs manufactured by the extremely wealthy drug companies. Besides smoking weed cures most of all my head problems.

Within a few hours, I'd knock off several things on my "To Do List." I made a couple of phone calls, one to my old mentor on Wall Street. We had a six minute conversation and he explained to me everything that was going on with the European markets and how he thinks that will affect the US markets over the next few months. He also reassured me that my stock pick on Brasil Telecom was not a bad one and that he was so confident in my choice that he would loan me money to purchase more shares. Our talk made be feel more secure about my failing stock pick but we both knew that picking stocks had as much luck involved as skill.

Of course the stock market then proceeds to tank on Tuesday.

I did laundry because I ran out of underwear. In between laundry duties, I caught up on most of my email, while I read several newspapers and magazine articles. I went to the Greek diner for breakfast. For $4.65, you get three pieces of French Toast and three pieces of bacon with coffee, OJ, or tea. That's a bargain. The old Greek guys who work there were talking baseball. They are Yankees fans and kept making fun of Pedro Martinez.

I brought my Alan Watts book to read at the diner, but never got past a few pages since my food came pretty quick. I have about 75 pages left in The Book, but you cannot consume more than 20-25 pages of Watts per day. The subject matter is intense. One of the last passages I read blew my mind, "For unless one is able to live fully in the present, the future is a hoax."

Most people that I know are doomed. There was a time in my life when I tried to save people, like Neo in the Matrix, trying to unplug everyone and encouraging hem to live more in the moment instead of worrying about the past or future. But that was met with little jubilation and most of the time, people were pissed when I mentioned to them that their pursuits were meaningless and that they were a fraud for most of their lives, and that life itself was nothing more than mirages. These days, I keep my mouth shut. If you are not willing to save yourself, you will never be saved.

Alan Watts discusses concepts about living a life of fraud in The Book. Like I said, it's a heavy load to chew on that's why I can only read a chapter of his stuff a day. I've also been gutting through Ed Conlon's book Blue Blood which is 560 pages of small font. Conlon went to my high school and graduated seven years before me. I ran on the cross country track team with his brother. The Harvard grad is now a detective in the Bronx and penned the NY Times best seller. I'm learning so many things about NYC politics and life in the NYPD from his book. I also realized that Conlon grew up about 10 blocks away in an adjoining neighborhood in the Bronx and went to the parish that I used to play hoops against. Over the past week, I have been alternating between those books.

A created a new pile of books... books that I just finished reading. That pile is growing higher and is almost as big as the "To Read" pile. For some odd reason I feel that reading a book offers me more self-satisfaction and accomplishment than watching five or six movies. The more books that I read, the better I feel about myself that I'm not wasting my brain and life away.

If more Americans read books every night instead of watching TV, we'd live in a more productive society. If more Americans watched the news and read real newspapers and magazines, instead of crappy programs like American Idol, then I'm confident that George Bush would not be our president. But heck, that's what our leaders really want deep down... a mindless, uneducated populous that will work 40 hours a week so they can earn enough money to buy things to keep them distracted from the evil deeds that our leaders and suits in Fortune 500 companies are conducting everyday under your noses.

In less than an hour, I cranked out an article for Poker Player Newspaper. I have a deadline on Friday and spewed out 645 words on online gambling legislation. Since I'm going to be traveling and partying during the second half of June, I have to knock out 10-12 articles over the next 11 days so I can play without worrying about work. So far my gameplan is working. I was worried that I'd sleep in today and fuck off for several hours and find myself behind. I impressed myself with my discipline.

Over the weekend, I had a rollercoaster ride playing online poker. I dropped a large sum of money on Friday night and have been chasing that loss ever since. I've played more poker over the past three days than I did for the entire month of May. I'm going to end the month as a winner, which means two consecutive winning months in a row. That's something I have not done in a very long time. When I win at poker, it affects my mood and personality. I walk and talk with confidence.

Change100 picked up a hefty sum of cash on Sunday night after she took 3rd in a 988 person online tournament at Poker Stars. At least she had a winning weekend!