During my first trip to Amsterdam in the mid-1990s, I spent less than a week here and I filled up a small notebook with notes, thoughts, memories, and priceless quotes from Senor. 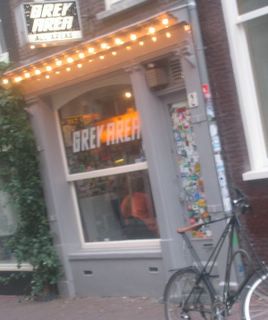 This particular trip, my notes are barely seven pages in total... not including one page that listed all the strains of mary jane I smoked, one page that itemized the majority of my daily purchases, and another that I used as a scorecard for my heads up Chinese Poker matches against Nicky. That leaves only four pages of actual notes that are peppered with three and four word entries like, "1:58pm... I thought I lost the hash."

I'm not even taking a ton of photos. My memory is better these days but my focus is more on living in the moment that trying to record what's been happening. I'm in the middle of a well welcomed phase of "Live now, write later." Even this entry is rushed as I gave myself less than an hour to read email and update both the Taos.

My first meal of the day has been pretty much the same thing for the entire trip. Nicky and I wake up around noon and head over to the French bakery a few blocks from our hotel on the Damrak. We pick up baguette sandwiches and eat them while sitting on benches in Dam Square as we make fun of the street performers and shoo away the pigeons that swarm at our feet nibbling at flakes and crumbs that fall to the stone plaza ground.

For 4.75 Euros I get the equivalent of a foot long sub, except the sandwich is an inch or two shorter on a freshly baked baguette with a couple of slices of ham, salami, and two kinds of cheese... Dutch kaas and French brie. You can order it with Dutch mayonnaise or French mustard (more of a dijonaise). Sometimes I opt for a chocolate croissant as a dessert, which melts in your mouth. I could not think of a better combination of sweet and smooth Dutch chocolate baked into crispy croissants.

I got ripped off buying 200 euros at Newark Airport because I was lazy and never made it to my bank branch on Fifth Avenue in NYC which offered a much better rate. I cashed $500 at an exchange place near Leiseplein on Monday away from the overpriced tourist traps near Central Station and got a much better rate (500 US for 362 euros).

Nicky misplaced her wallet before she left LA last week. She left it in the rental car that we used to drive to Vegoose and Las Vegas. Without an ATM card and no credit cards, she borrowed money and showed up to Amsterdam with 300 euros to her name. Between the two of us we started with 862 euros. We have about 250 left and want to see if we can last through Friday on that.

I had a hectic fifteen minute stretch at the Bulldog the other day. I smoked too much Silver Haze as a Paris Hilton song played on the stereo and I freaked out when I thought I lost a baggie of hash I carried in my jacket pocket. I didn't care about the bag or the monetary cost of the lost drugs. I was worried that I misplaced it and the hunk would end up in the pocket of my jeans or in a different pocket and I'd unknowingly take it home with me and get busted at a security checkpoint or in customs while sweating my ass off like Billy Hayes in the airport raid scene from Midnight Express who had several kilos of hash duct taped to his ball sac.

I went to the Rijks Museum despite the ongoing renovation. The collection was sparse and they featured a special exhibit of Rembrandt's sketches. Those were basic throw away sketches that he never intended to show anyone. It's remarkable that pieces of paper he wanted to toss had artwork on it that's 95% more powerful than anything has come along in the last 370 years. To experience that exhibition was both humbling and inspiring.

I had one of the best hot chocolates I've ever drank at the Other Side coffee shop near the flower market. It wondered if they melted real chocolate into milk? I finally found the Grey Area, which is owned by two Americans. My brother went there a few years ago and it's off the main drag, tucked away off a canal. It's a tiny tiny tiny coffee shop with just three tables and a few stools. There's never any space to sit as the place is always crowded no matter what time of the day it is. The walls are splattered with various stickers. I saw plenty of Widespread Panic and String Cheese Incident stickers, along with a Phish poster plugging their gig at the Paradiso in 1996.

Some of the best bud I smoked in Amsterdam was the Grey Haze which you can only get at the Grey Area. It wasn't the most expensive but it sure was the best high. One bowl got the always stoned Nicky baked.

In the late afternoons, we succumb to the munchies and are unable to ward off their advances. That's when I go for something sweet like a chocolate croissant or chocolate covered waffles. There's two things that there's an abundance of in Amsterdam... chocolate and cheese. Mostly everything has either of the two incorporated into it. I also dig the Belgium fries or frites with mayonnaise. I can eat an entire serving in less than three minutes.

My dinner meals included a fillet at an Argentinean steak joint. It seems that all of the steak places in Amsterdam are run by the Argentineans. Another night, I ate Italian food with Nicky. She got a four cheese creamy sauce with tortellini while I devoured pasta with arrabiata sauce that was so spicy that my bald spot became devastatingly drenched with sweat like the Ninth Ward in New Orleans was flooded after Katrina hit.

I decided that Umma Gumma is my favorite hashish. You can only get it at Pink Floyd's coffee shop and we've been there every day since our arrival. The Umma Gumma is a mellow body high that doesn't make you tired. It's speedy, which is perfect for dusting bowls and joints throughout the day. 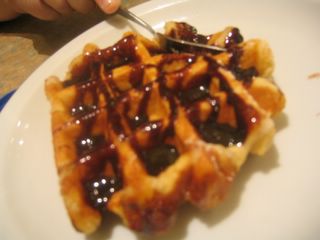 The Heineken Brewery tour is well worth the 10 euros admission. Since we're in town during the off season, the Brewery wasn't super crowded and we went on the tour at our own pace. I drank three beers for free and Heineken tastes different in Holland. It's hard to describe aside from the fact it's smooth. Smoother. I can drink it like water.

After the tour, we smoked and played Chinese Poker at the Bulldog. We sat next to a couple from Greece. The guy looked like writer Arthur Nersesian and his girlfriend was at least half his size and half his age. They got hammered and fumbled through their map before stumbling out of the bar.

I stopped off at the Grey Bar to pick up more Grey Haze and a sketchy looking Asian gangster guy was passed out at one of the tables. He looked like he was riding the H train and kept nodding in and out of consciousness.

Nicky's favorite joint to hang out is the 420 Cafe. It's one of the few places that serve beer and liquor in the same area as you can purchase and smoke weed and hash. The glasses of Amstel are 1.90 euros and the bartenders are Dutch blonde beauties. They have a good selection of herbal supplements and also have a vaporizer. When we stopped in, the place was crowded with old American hippies... about a dozen of them mostly from Texas. They were loud, obnoxious, and doing shots of tequila. One of the chicks kept talking about Bill Nershi leaving String Cheese Incident and the band breaking up at the end of the Summer of 2007.

The Victoria Hotel offers up a free breakfast buffet from 6:30 to 10am, but we've never been up in time to partake until this morning. They had a hybrid Dutch and English breakfast which included beans and toast. We got up early this morning and went, which meant I ate weird eggs and potato pancakes with Vienna sausage, raw bacon, and baked beans. I also had some Dutch cheese and made a raw bacon, egg, and cheese sandwich. The freshly squeezed OJ hit the spot but I'm still shocked that Europeans eat their bacon raw and barely cooked. They must toss it on the grill for less than a minute. I like my bacon burnt to a crisp.

I bought a lighter in a vending machine and opened up a huge lead playing Nicky in Chinese Poker. She got pretty pissed off at me yesterday and refused to talk to me for an hour after I sent her on tilt. She's over it now... and we even played a few hours ago. The other day, we sat through an hour of horrendous migraine inducing Eurotrash techno pop at the La Canna coffee shop that would make Dieter's (from Sprockets) nipples stand erect as three wasted girls from Spain wearing tight jeans with big white belts at the table next to us couldn't stop screaming. I couldn't tell if it was the Himalayan hash or the music that whipped them into a trance-like frenzy. The voguish club tunes didn't faze Nicky, who put up a good fight despite the ovbious distraction.

We went to the Van Gogh Museum and had another one of those humbling/inspiring experiences which I'll write up when I get back to NYC. We ate the Mexican cubensis shrooms and got pretty jiggy. Nicky got a little too wasted and couldn't handle being in public so we left one of the coffee shops and hung out in the hotel room and listened to 90% of Widespread Panic's Vegoose set which was almost three hours long. Eventually, she had come down to a more serene point of her trip and we wandered around in the rain. We ate some Belgium frites and walked over to the Red Light District. Nicky checked out more of the hookers and the shady guys on the intersections of the bridges along the canals who were selling hard core drugs. One guy was pitching Viagra. And I thought... "That's fuckin' genius!"

Pop a blue pill. Than bang a hooker. Why didn't I think of that racket first? That dude selling penis pills in the heart of the Red Light District was swamped with clients.
by Pauly at 11/09/2006 04:20:00 AM