Had that been a scene in a movie, the background music would have stopped and everyone in the bar would have turned around and starred at her in astonishment for several awkward seconds. 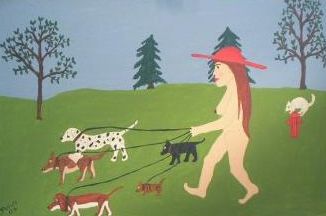 She took a sip of her drink, an overpriced Apple Martini, and I immediately thought, "Do all animal molesters drink Apple-tinis?"

"It's not what you think," she said trying defend her statement. "Why are you freaked out? You're the one who asked me the question. You're supposed to be the bohemian writer living on the edge, hanging out with criminals and low lifes. On your travels you've never once heard about someone blowing a dog?"

"A donkey, yes. Don't forget I've been to South of the Border to Matamoros. I saw a guy fuck a chicken once too. Uneventful. But I've never sat a few feet from an actual canine cock smuggler."

"Oh my God! You are totally freaked out. Must be that McCatholic thing, right?"

"I'm not freaked out. Surprised is a word that comes to mind. And I never asked you how many dog's dicks you sucked in your life. I believe the question was, 'What's your most bizarre sexual encounter?' I was hoping to hear about hot lesbian affairs or made a semi-erotic story about how you gang-banged three chain-smoking snail-eating French dudes in the bathroom of a bar in Montmartre. I didn't think you'd actually fess up to bestiality."

"Fuck you, McFucker!" she screamed.

"That dog was no beast. He was a beautiful animal and I loved every second of it."

"I don't believe you," I badgered her.

"I only did it that one time. I was curious. Don't freak out on me now. Haven't you gotten aroused by doing something you shouldn't?"

"Of course, but chugging doggie cock wasn't one of them."

She sighed and had a long sip of her drink before she checked her cellphone. She had gotten a text message during our banter which she read then never bothered to answer back.

"How did you know I was lying?" she said.

"I didn't. It's what we call in poker a 'semi-bluff.' I sensed weakness because there was some doubt in your story. Someone truly ashamed of a sexual encounter with a dog would have not revealed that secret in a public place. And if you had no qualms about people knowing, you would have told your friends... and I would have found out months ago. Besides most tells and lies are non-verbal. You make the same face when you lie to your friends and say, 'I love those shoes.' They can't tell when you're bullshitting, but I can."

"Well, your semi-bluff is semi-wrong."

"That's one lucky puppy," I added.

That time I knew she wasn't lying.