Anatomy of a Britney Spears Breakdown: 32 Steps to Lunacy 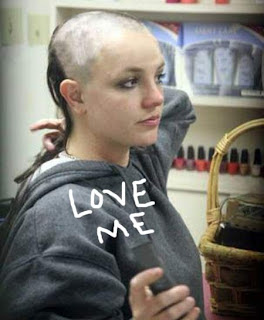 1. Grow up white trash, preferably in a trailer park in the deep South.

2. Get sexually abused by a male authority in your life.

3. Get used by your stage mother who wants to play out her unfulfilled dreams about being a dancer and singer.

4. Get whored out to the Disney corporation.

5. Get a record deal after your mother blows three producers.

7. Get implants per suggestion by your sleazy manager and stage mother.

8. Make several million dollars with record deal, but only get a few grand in spending money.

9. Turn 18 and hit the road playing all over the world, sleeping in strange hotels, and having your entire life planned out for you around a rigorous touring schedule which makes everyone around you tens of millions of dollars while you only get like 15% of total gross.

11. Have a difficult high profile relationship with a famous member of a boy band who happens to like chugging cock more than you.

13. Very gay boyfriend gets more and more famous then dumps you for a solo singing and acting career.

14. Sink into a morbid depression and commence binge eating, then overpay for a shrink who jacks you up with mood altering drugs.

15. Get drunk in Las Vegas on New Year's Eve and marry your childhood sweetheart at 4am in a crappy chapel in North Las Vegas.

16. Have your stage mother, publicist, lawyer, business manager, agent, and president of your record label freak out and scold you over a conference call while you are hung over.

17. Get marriage annulled while assclowns like Letterman, Stern, and Leno take jabs at you.

18. Go on tour to make the fat cats millions more and fall in love with a pothead and deadbeat dad that wear's wife beaters, sideways hats, and can't afford a belt to hold up his pants.

19. Marry stoner and deadbeat dad and get knocked up.

20. Move into seclusion in Malibu and start doing weird things that get photographed by paparazzi.

21. Get knocked up a second time by pothead deadbeat dad.

23. Tell deadbeat dad to fuck off after he sells your underwear on eBay to buy a new XBox.

24. Hire a nanny with a criminal record and known immigration problems to take care of your kids.

25. Call up Paris Hilton and Lindsey Lohan and go on a Grey Goose and coke binge that lasts three days.

26. Get followed by paparazzi who post photos of your naked snatch which gets posts all over the web, even in Iran.

27. Get all the self-righteous nutjobs out there to question your stability as a parent.

28. Go to NYC and get shitfaced. Puke in your limo, do all your coke, blow some random guy for more coke, and pass out in his bathroom while his friends do "the train" on you.

29. Check into the same rehab place as Lindsey Lohan.

30. Leave rehab after one day because they don't have Cheetohs.

31. Lose your shit and wander into a tattoo parlor in the Valley.

32. Get a crappy tattoo and shave your head while paparazzi snaps photos.