I should be in Hollyweird this morning waking up in The Standard Hotel on Sunset Strip. I'm not. I'm freezing my ass off in NYC with flu-like symptoms and a burning fever. I've also been on hold with JetBlue for 55 minutes now waiting for the next available operator to figure out my seat assignment for a new flight on Friday morning.

Before I left for the airport yesterday, I went to JetBlue's website and my flight was on time. I arrived at JFK airport at 10:10am for my 11:30am flight. The roads were crappy and it took about 75 minutes to get to JFK.

I checked in and my flight to California was scheduled to board at 11am and depart at 11:30am with a 2:43pm arrival time in Long Beach, CA. I got through security without any problems and hopped on the shuttle bus to the new JetBlue terminal. When I walked in there, it looked like a refugee center. Every seat was packed with disgruntled travelers. They were headed to sunny destinations like Florida, Aruba, and the Bahamas but their flights were delayed or bumped.

An announcement boomed throughout the terminal, "Due to current weather conditions, there's a ground stoppage at JFK. No flights are landing and none are taking off until further notice."

My ticket said Gate 24, the last gate in the terminal, so walked the entire length of the new terminal as I saw all the unhappy faces on passengers. Some folks were sleeping on the floor. Parents were doing their best to entertain their restless kids. Business travelers fought over the few power outlets in the terminal as they sat huddled around their laptops.

At my gate, there were two flight loads of grumpy people there waiting to go to Las Vegas in addition to my flight to Long Beach. That was not good.

The rep at the counter said that the plane at the gate was for Flight 209. That was my flight! As soon as they were cleared to leave, we would be one of the first flights out. I stood around and waited for a few minutes as looked at the plasma screens with departure information. The status of a couple of flights to Florida changed. That's when the entire screen flipped just like in the movies. All of the flights went from "On Time" to "Canceled." Well, all except two; a 3:30pm flight to Austin, TX and the 11:30am flight to Long Beach.

Did I just get super lucky?

Hordes of passengers started leaving their seats and headed to the Ticket Change counter in the main terminal. I had walked past it a few minutes earlier and it was about 150 people deep.

"Maybe I should get in line?" was my proactive thought. Just in case my flight was canceled, at least I had a place in line. At that moment, the status of my flight was downgraded from "On Time" to "Canceled."

I noticed that there was a smaller ticket change counter in the new terminal and stood in line there. About twenty or so people were in front of me. There was a guy standing in line behind me who looked like Bill Parcells. We chatted for a few moments. He was also on Flight 209 to Long Beach and was going to see his grandkids. I pulled out my cell and called Jet Blue's customer service. There was a message saying, "Due to heavy call volume, we are unable to answer your call. Please visit us online at www.jetblue.com."

Bastards. I texted Nicky and told her the bad news. She called back five minutes later. I could tell she was not happy. At the time, I was furious but doing my best to calm down since I knew that I had no control over the situation.

I called JetBlue again and that time I got in. I waited and waited and waited. The line barely at the new terminal moved while I was on hold for thirty minutes. Eventually, I was connected to an agent. She said all flights to California on Wednesday and Thursday were booked, as were most flights on Friday. I asked to fly to anywhere in California... San Diego, Long Beach, Burbank, Ontario, Oakland, and even Las Vegas or Portland. After ten minutes of looking, no such luck. The earliest she had was Saturday and that was a Saturday night flight into Burbank connecting in Oakland or a flight to Long Beach connecting in Washington, DC.

That's when my cell phone made that horrible sound to let me know that my call was dropped.

The old lady in front of me smiled and said, "It's OK. Calm down."

I told her about the dropped call and she said, "Well fuck. That was a waste."

That's when a young black woman tried to cut the line. Bill Parcells said something and I quickly backed him up.

"You cut the line. What's up with that?" I said in my confrontational New Yorker voice.

That's when she pulled out the race card and accused me of being a racist. I should have punched her twice. Once for cutting the line and the second time for improperly tossing out the race card.

"I don't care who you are or what you look like. We've been standing in line for over a half hour and you just cut us," I snapped back as several hundred people stopped to watch our spat.

"You're a racist and only doing this because I'm black," she screamed.

That's when an older black man standing behind Bill Parcells spoke up.

"Get your ass to the end of the line and stop acting like a fool," he fired back.

She mumbled something under her breath as she looked at the line which had grown to over 100 people.

I waited for forty more minutes in that line. There was another incident when three people in wheelchairs were wheeled to the front of the line. A couple of people behind me were furious and a security guard had to be called over to quell the near riot.

When I finally got to counter, I discovered that there was a 6:30am flight leaving JFK on Friday morning headed to Burbank. That was 36 hours earlier than the flight to Burbank on Saturday and it was a direct flight so I snatched it up.

My new flight was scheduled to leave 43 hours after the original flight. I could have gotten a seat on a 7pm flight on Wednesday night, but they said there was a 90% chance that doesn't leave and I'd have to get back in line again to get another ticket. I didn't want to sit in the airport for another six hours to find out a second flight was canceled, so I took the sure thing for Friday. It ended up being the right choice. That flight was grounded because the plane had too much ice on their wings and couldn't take off.

Overall, it took 75 minutes to wait in line and rebook a flight and during that time I was accused of being a racist and had one of the worst dropped calls since I ever got a cellphone. I took the shuttle bus back to the main terminal and fired up my laptop. That was where I had the hotel info for The Standard. For Valentine's Day, I booked two nights in an extra large room in the swanky LA hotel with the most famous pool in Southern California. They had a strict cancellation policy and I was only able to cancel one night. They charged me for the first night and whoever was on the other end must have been having a bad day because they were unwilling to help me out.

Talk about getting kicked when you are down. They even had the balls to ask me if I wanted to rebook this weekend. I told them I would book a room, only if they gave me a free night instead of charging me for Wednesday. They said no, so I hung up.

I had been at the airport for about three hours and didn't have a bite to eat sicne I woke up at 6am after three hours of crappy sleep. Aside from a small bottle of water I drank while waiting in line, I was starving and thirsty and jonesin' for a toke. I should have gotten something to eat, but I wanted to get the hell out of JFK.

I didn't dress warmly for the airport. I got a ride and assumed that I was going to sunny California. I traveled light. No hat. No gloves. No thermal underwear. The winds kicked up. The wintry mix of sleet, freezing rain, and snow swirled around as I walked over to the cab line. Packed. There were only a handful of cabs in line too. I had no choice except to take the monorail to the subway. 1pm. Welcome to three more hours of hell.

Nicky and I were supposed to spend two nights at The Standard. Alas, my chic Valentine's Day plans were ruined. Nicky sent me some pics of the flowers she got from yours truly. I went with the tri-colored roses. Nice touch. 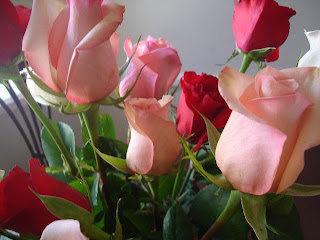 After being on hold for one hour and tweny minutes with JetBlue this morning, I finally got through and found out I had a middle seat and could not change it. I'd have to wait to get to the airport to do that. I waited 80 minutes to talk to someone for ninety seconds only. What a fuckin' waste of my time.

Here are some links to JetBlue JFK horror stories: