About twenty minutes before the WSOP began, I was already $50 in the hole after I lost a prop bet against Tiffany Michelle, who does video interviews for Poker News. The poker kitchen was moved inside and took up a massive area in a ballroom that used to be utilized as the hospitality suites for online poker sites. Outside the rooms were a few tables where people could sit and eat. A group of Scandis had gathered including pros Thor Hansen and Per Ummer. They had been eating sandwiches before they walked away. A large bucket of French fries sat untouched. I offered Tiffany $50 to eat the entire bucket. She picked it up and started chowing down. 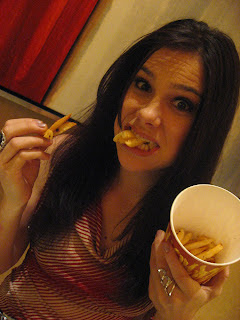 Yes, that girl can eat. The fact that it was someone else's leftovers did not deter her. She crushed the bucket and Daddy would have been proud of her ability to knock back a couple of potatoes with only a small helping of ranch dressing on the side. Did I mention that they were cold and soggy? It didn't matter, she ate them all and I forked over $50.

Note to self... never make eating prop bets with Tiffany or Otis. The WSOP had not even started and I was in the hole prop betting. This is going to be a long summer.

The first day of work was long and exhausting. I was handed the wrong badge that would be the first of many screw ups during the my first day on the job. There were long lines at the Rio and the players hated the new playing cards that they used for the WSOP.

I sat next to Flipchip and Mean Gene in media row. That was fun. I had a team of five or so "interns" under me covering the opening tournament. Two years ago, I was covering the event by myself and now I have a team of college kids looking up to me.

Nicky and I woke up late on Friday and did not have enough time to get a proper breakfast. Instead we opted for bacon, egg, and cheese toaster sandwiches at Sonic. That hit the spot.

At some point during my 15 hour work day, I ate two really bad cheeseburgers from the poker kicthen. I also consumed a Snickers bar and a pint of Stella at the Tilted Kilt pub where I watched some of the Yankees win over the Red Sox.

Somewhere around Midnight I got that sick feeling in my stomach that I have to endure the grind for another 46 days. Although it was Midnight, I knew I had at least six more hours of work ahead of me. It's tough to write while you are falling asleep at your laptop. I decided to crash for a few hours and got up early to finish my work. Although I was still drained, my mind was operating on a more creative level after some slumber.
by Pauly at 6/02/2007 02:45:00 PM