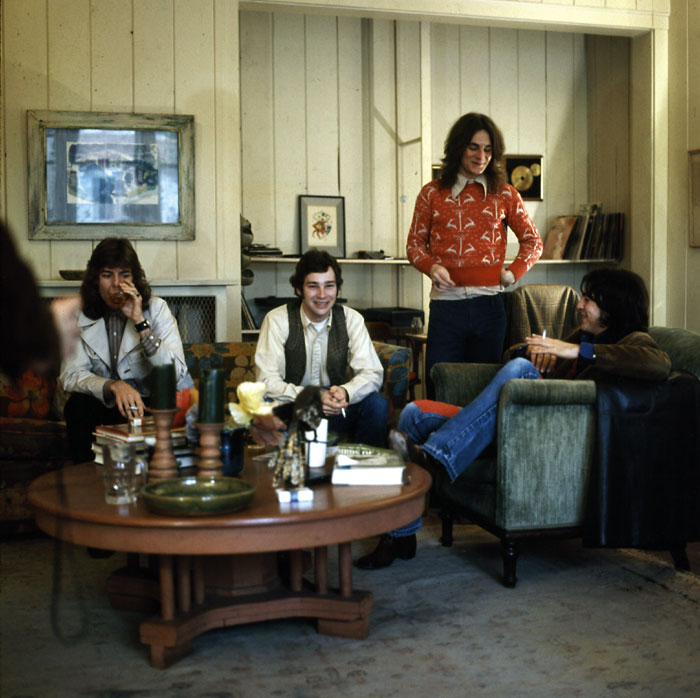 Over the last week, I watched a pair of documentaries about two bands that never quite hit it big, yet they inspired numerous other bands. The other night I penned something about Color Me Obsessed, a documentary about The Replacements. Today, the focus is on a band with a highly ironic name -- Big Star.

You know at least one Big Star song. Seriously. In the Street.

Familiar? It is most known as the theme song from That 70s Show. I think the first few seasons used a cover version by Cheap Trick before the original by Big Star finally aired. Guess what? People bitched and moaned about it. They didn't like the original! What a bunch of fucktards.

Big Star is the best band you never heard of. Well, that's not exactly true. But they're one of those tragic bands that had so much potential that was never fully realized due to some circumstances beyond their control. Suits and liquor and self-doubt. That did them in. They had problems with their label and shuffled around different members before the original guitarist Chris Bell died in a car accident at the age of 27.

The scene... Memphis in the late 60s and early 70s. Alex Chilton had gained some notoriety for being the lead singer of a one-hit wonder band The Box Tops back in August 1967. They sold over 4 million singles with their hit song The Letter. Chilton was still in high school when he joined The Box Tops and rumors suggest he was even younger than he let on. Chilton had a dynamic yet eerie voice, both melodic and haunting.

Here's what made Chilton initially famous:

Flash forward a few years to 1971. Chilton bailed from the Box Tops and linked up with guitarist Chris Bell. They formed a group and had a highly hysterical sense of humor because they called themselves Big Star. They were in the right place at the right time. Stax Records was looking to build a stable of rock n roll acts on a subsidiary label -- Ardent Records. Big Star was right up their alley and they got a deal.

Big Star was one of those bands that sounded awesome in a live setting. They were also very adept inside the studio. Chris Bell knew his way around a mixing board, especially the state of the art equipment that Ardent's recording studios had at the time. He became a quick master at manipulating different sounds and he was the sole reason why Big Star's first album had some unique sonic textures.

Chilton and Bell had a twisted sense of humor which spilled over into the title of their first album #1 Record. Although the songs on their debut album were worthy of a potential big hit, the band got screwed by Stax's poor marketing and advertising concepts. Long story short, the band had a few great songs but the label screwed the pooch and did a shitty job at promoting and distributing the album to key markets. Alas, Big Star's first album went virtually unnoticed outside of Memphis.

Big Star hoped their luck would change when Atlantic Records acquired Stax (and its subsidiaries like Ardent). However, Atlantic Records had zero interest in the Ardent label and they cockblocked any distributions of Ardent records, including Big Star's first or second albums.

Talk about a wicked bad beat. Big Star got caught up in the gears of the music industry. Big Star got swallowed up and spit out by greedy fat cats running major record labels. It's difficult enough to make good music. It's gotta be frustrating to have that music get ignored due to corporate bullshit.

Big Star was also having problems internally. Chris Bell and Alex Chilton were being dubbed as Memphis' Lennon and McCartney. However, most of the press fawned over Chilton, which left Bell bitter and jealous. The rest of the limited reviews were not very good, which send Bell into a morbid depression. He started drinking heavily to cope and his remaining days in the band were numbered.

Chris Bell is often mentioned as a lesser known member of the 27 Club... a group of legendary musicians who died when they were 27. Bell was a few weeks shy of his 28th birthday, but he did not die of an overdose. Bell died in a car crash when he hit a telephone pole. He wasn't drunk/on drugs, but he supposedly was day dreaming and thinking about a song when he spaced out and crashed.

Chilton continued on and finished the second album with limited contributions. By the time the third album rolled around, Chilton was the only original member remaining.

The first album, #1 Hit, is sort of like taking a time machine back to 1973. Half of the album is filled with balls-to-the-wall classic rock songs... the kind of songs that you love to hear in your car while on a road trip, or cranked up while ripping a few bong hits in your buddy's basement. The other half is very mellow -- acoustic guitars and floating vocals -- extremely reflective of the singer/songwriter scene that was exploding in the early 70s. Yeah, Big Star was the best of both worlds. It was a band that equally drew in both male and female fans.

When art meets commerce, those crossroads usually suck the entire lifeforce out of creative people. They create things that need to be created, rather than creating things for a specific reason of mass consumption. Big Star got caught up in those massive gears. They might have been too good for their own good, but they were also downright unlucky.

Alex Chilton went on to form other bands -- mostly punk or art bands in the early 80s. Chilton had a compelling career from 60s one-hit wonder to 70s rocker to 80s punk/art freak.

Despite Big Star's lack of commercial success, the band inspired several other bands. Peter Buck, the guitarist of R.E.M. adored Big Star not to mention the guys in The Posies, Teenage Fanclub and of course The Replacements, which named a song in honor of Alex Chilton.

Take a ride with Big Star...