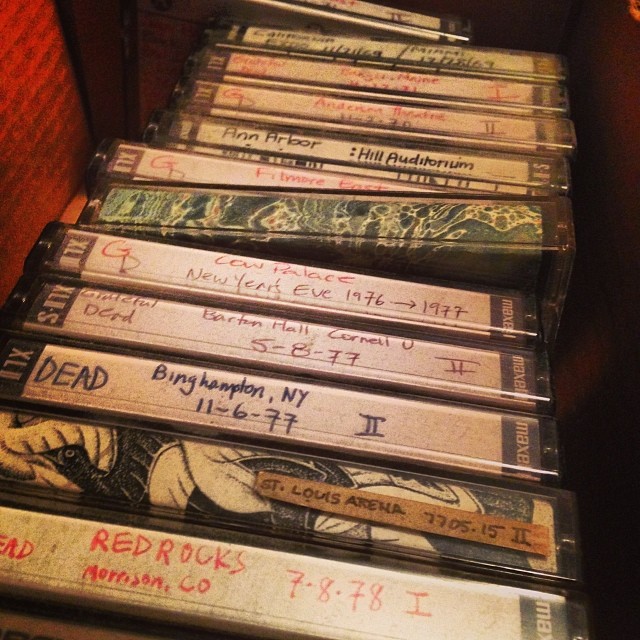 Memories in a box. Boxes of memories.

I have lots of boxes in storage in NYC. I used to think those boxes were filled with decades of memories -- childhood, high school, college, post-college, years on the road, poker schwag, and more books and CDs than I know what to do with -- which is why I was hesitant to throw them out. But I finally realized that the boxes are merely filled with stuff. Not actual memories. Because memories are intangible flashes of film clips that run intermittently inside your head.

Sometimes memories are not even accurate and you have someone else editing or playing clips of your own revisionist history without even realizing it. Some of the worst memories appear like the Zapruder film moments as JFK gets his head blown off.

I have plenty of bad memories ruminating inside the hallways of my mind. I guess I'm still haunted from a car accident 2.5 years ago because I get jumpy whenever I see a stupid car insurance commercial that includes footage of an accident. I can suspend disbelief when I see car crashes on TV shows and films, but commercials are powerful because they pop up when you least expect them. I usually don't watch TV in real time unless it's sports and you can't watch any sporting event without seeing one of those terrible insurance commercials with cars smacking into each other. Fear mongering at its finest. That's when my own personal hell of a Zapruder film gets played on an endless loop and I can feel shards of glass spraying everywhere.

But all those painful memories are inside my head. They are not real. That's why all those boxes I have in storage do not actually contain memories. Everything in those boxes are triggers, but not actual memories. I have boxes of triggers. Thousands and thousands of them. Physical items are mementos because they can jog the memory, but it's not an actual memory.

So do I keep the triggers? Or do I throw them out?

Every single memory is inside your head, or perhaps even stored in a collective cloud of consciousness where all memories from every human is stored. If you believe in God, then the omnipotent one has access to the memory cloud. He knows if you've been naughty or nice.

Will you have access to that memory cloud in the afterlife (if there is an afterlife)? Is heaven merely just you floating in space for eternity with your life's greatest memories playing on an endless loop? Is hell being stuck traumatized by an endless loop of every single horrible incident in your life?

I was hesitant to throw out certain boxes because I did not want to throw out memories. But like I said, the memories are internal. I keep going back and forth over the importance or vapidness of logging (on the intertubes) almost everything that happens to me. For a while (like seven plus years), I was vigilant about getting as much stuff down as possible. But then I got paranoid and was convinced someone or some government entity was going to use those words against me in a court of law. So I got gunshy and then had a period when I recorded stuff privately. But then last year I said fuck it... if you expose all your secrets, then you have nothing to hide and you can't get blackmailed. Then again, I wanted to have access to memory triggers (like blog posts or photos) because your memory is not reliable and often fuzzy sometimes, so I'm lucky to have a personal journal (private) and a blog (public) to help fill in the blanks.

Some things I'll never throw out like ticket stubs for some reason. I guess I like having them and seeing how much a concert cost in 1996. Shit was much cheaper then and the ticket price was the actual price... no hidden costs. These days there's so many surcharge fees that the actual ticket price feels like it was half of the final price.... of course, that does not include shipping or printing costs.

I feel like Willie Nelson in Half-Baked. "I remember when a dime bag cost a dime."

My friend Boogie once called me a minimalist. I think she meant as a compliment. I didn't need extra things to make myself feel happy or didn't need material items to validate my existence or use them to make myself seem more superior to others whom use material items as a means to judge you. I don't give a shit about those fuckers. Never did. Guess that's why there's always some friction between me the minimalist vs. the materialists.

It's like being a golfer that does not keep score. I'm a bad golfer so I never kept score because it would only depress me and ruin a nice fun time on the links with friends. All I wanted to do was hit one really good shot per round. I guess that's not a bad way to live life... do at least one thing well every day. But what's the point of keeping score? Just be in the moment and enjoy stuff. But some assholes have the incessant need to keep score because they constantly need to be validated.

Guess that's why I don't fit in in LA because everyone obsesses over image while I don't care about what kind of car I drive. I actually don't own a car. The last car I had... got totaled in Vegas. Nicky won't let me drive her new car and I don't blame her.

For many years I traveled so much for work that I really had to embrace minimalism and take what I could carry on my back. And if you travel much on airplanes, you never want to check your bags so you have to take as much as you can fit in a carry-on bag. You'd be surprised how far you can get on very little. I've done a month in Europe with a tiny bookbag and logged up to five weeks on Phish tour with a similar size bag. When you have those experiences, it makes you question whether or not why you need all that extra stuff in the first place. Then you see how much money people waste on unnecessary things.

Reminds me of that George Carlin line about a house is just something to put your stuff.... and if you didn't have so much stuff, you wouldn't need a house.

My mother is a hoarder and compulsive shopper. She came from humble beginnings so I get the psychological aspect of wanting to be able to buy things now that she never could have as a child. I also understand that the hoarding is also a byproduct of 'empty nest syndrome.' She no longer has two children running amok so she fills her space with stuff. But it's something that makes me incredibly sad to see because there's nothing I can do to stop it. Whenever I visit, I'm surrounded by boxes of stuff... some things that have never been opened and maybe never will.

I'm the opposite. I'm always looking for an excuse not to buy something or I'm constantly looking to throw something out. I'm from the 'less is more' school of thought. Afterall, you can't take it with you into the afterlife, right?

I'm also an avid pacer and need space to walk back and forth. The walking helps me think. I loved our long-ass hallways in San Francisco in Halli's apartment. I could pace back and forth for hours just thinking. I missed that. That's why I can't be in confined spaces because I lack space to think and pace and let my mind wander. I don't like being jam packed into small spaces surrounded by stuff, because it feels suffocating and makes me sick knowing how much money Americans waste on trying to look cool or feel better about themselves.

I tossed out a bunch of storage stuff the last few days. I had extra time in NYC so I used that time to look through old boxes of what I thought were memories... but it turned out it was just old, dusty stuff that is just taking up space.