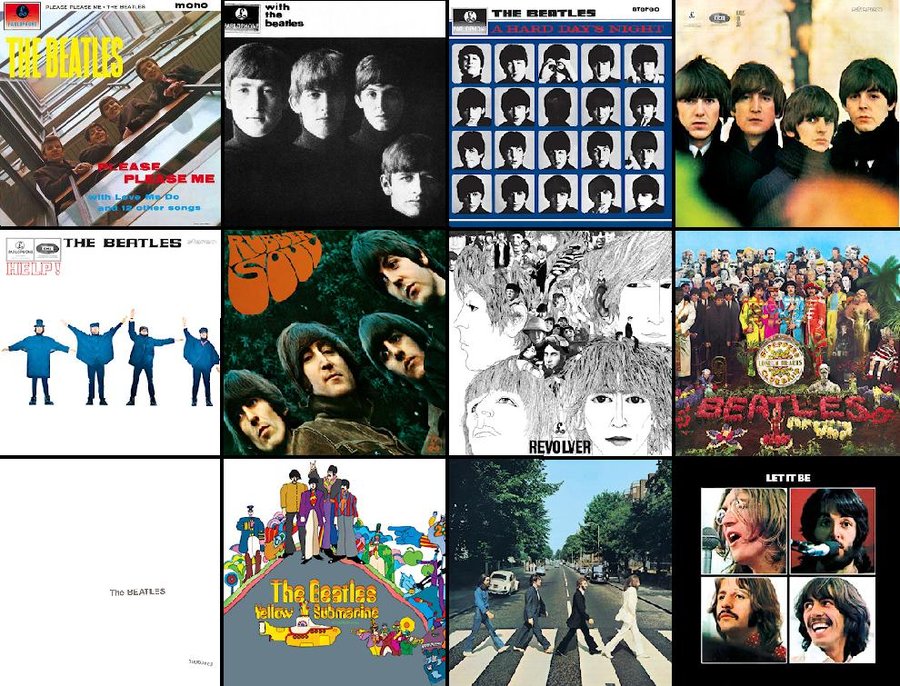 I go through different periods of the Beatles. If you asked me 20 years ago what my favorite album was, I'd tell you something different 20 months ago, let alone 20 days ago. Keeps moving around. Like a moving target. Sometimes I just get sick of an album, other times I gravitate toward another one. It's just that there's so much material that I identify with different songs and albums the older I get.

The first Beatles album I bought. Actual double album, er a double CD. During college, both discs were stolen at separate times. I recovered one and never recovered the other. I purchased it a second time in NYC after I graduated and ended up selling it at a used record store in Seattle near UW. It had some of my favorites like Helter Skelter that I'm not embarrassed to admit I heard about the nefarious shit involved with the album through U2's version of Helter Skelter. "Here's a song Charles Manson stole from the Beatles... and we're stealing it back." Phish covered While My Guitar Gently Weeps at Madison Square Garden one night and my mind was blown. Maybe it was the mushrooms. But I came to the realization the George Harrison was the most talented musician out of the four and most underrated. He was too passive and let Paul and John butt heads.

This is probably the album I listened to the most from start to finish. It was in heavy rotation many years in my 6-CD disc changer as part of continuous writing music. How many albums can you listen from start to finish without skipping a song? That's how strong this album was... which was really intended to be the last-ever album, which is why the last song was titled The End. FYI... Let It Be was recorded before Abbey Road, but released afterwards. So technically speaking, Abbey Road was the last-ever album. I dig Here Comes the Sun because of all the psychedelic imagery attached to it. Another Harrison track that he supposedly wrote after tripping balls all night and watching the sun rise.

Theme album that was a loosely based theme. Beatles trying to make music under the guise of this character Sgt. Pepper. Keep eating acid, guys. But it has one of my favorite hooks... from Sgt. Pepper Reprise. This album reached its peak for me in college, when we were experimenting with a shit-ton of mind altering drugs. You never forget the day when you figure out Lucy in the Sky with Diamonds is an acronym for LSD. Like I said... keep eating acid, brahs.

Sort of the extras that never quite made the cut for Sgt. Peppers. This is more like Junior Varsity Beatles (JVB). It included Strawberry Fields which I was familiar with growing up in New York City. The parks department named an area after the song. It was located just inside Central Park at 72nd Street, close to where John Lennon had lived and was gunned down. As a kid, I assumed Lennon was talking about Central Park but it was a real place that he passed on his way to school everyday in England.

This was one of those albums that I overlooked for many years, but gravitated toward as an adult. It was the first acid-album... or one of the first albums when you put it on and was like... holy shitballs, these guys are fried to the tits on a delicious batch of liquid sunshine. Lyrics can be interpreted thousands of ways, but it's rooted deeply in that psychedelic awakening that happens right after that frightening ROAR when you don't know what the fuck is happening to you.  This was 1966... just before the summer of love and the hippie explosion. You can say that this album encouraged many wayward teens to take the leap into the unknown. The Beatles were the first batch of mainstream musicians to furrow deep into the rabbit hole. They tried to explain those experiences on this album. The last track Tomorrow Never Knows is a glimpse into the future... and it's dark and scary. That is one of those songs that is a true litmus test. In Mad Men, Megan tries to get Don to understand her and the 60s by playing him the song, but he's way to square to get it.

The Beatles' songs from Rubber Soul heavily influenced the sonic weight and exploration of Beach Boys' Pet Sounds, which was Brian Wilson's response to Rubber Soul. In turn, the Beach Boys' vocal harmonies had heavily influenced the Beatles. Both the Byrds and Bob Dylan were also influential to Lennon/McCartney. Dylan encouraged the Beatles to take huge leaps away from their bubble gum pop hits and take some risks with deeper lyrical exploration. If anything, this is the album when the Beatles turned the corner. Maybe it was because Dylan introduced them to weed and it truly opened up some doors that they never knew existed. This album was the bridge from the early 60s innocence to late 60s drug-induced decadence.

The last album? Actually the penultimate album. The Beatles had gotten too fancy in the studio embracing technology and multi-track recording. They wanted to return to basics and be a live band again, and they even added Billy Preston on keyboards to help give them a funkier sound. But they were rusty and testy and tired of being the Beatles. It didn't help that Lennon insisted Yoko be in the studio with them. Even though she never said a word, that irked the rest of the band and caused serious friction. The band was in deeper trouble that everyone realized and the Let It Be sessions were the first stages of breaking up, but they still pulled it together to make a couple of remarkable songs like Get Back and Don't Let Me Down. This is the album that the band played on the roof of their offices. That infamous rooftop concert is something that will go down in history as the last time the Beatles ever performed together in a public setting.

I'm trying to learn guitar and I got sucked into early Beatles. Some gems on there... back at a time when the Beatles were ahead of the curve. Simple, yet catchy.

Email ThisBlogThis!Share to TwitterShare to FacebookShare to Pinterest
Tags The Beatles