I'm supposed to be in Los Angeles right now.

Sunny Los Angeles. In the warm confines of my office, where the sun pokes in through the window and I can see palm trees and ubiquitous sunshine. But that's not the case. I'm stuck in freezing NYC for a few extra days because of a so-called blizzard. It's a storm named Hercules and it failed to live up to its billing. At first I assumed there was some promotional tie-in with Hollywood because you don't name anything these days without a corporation's evil hooks in it. But no, it was just a name that was trying to intimidate the masses.

Hercules wasn't even a huge storm. Felt like an average snowfall, which meant that the Hercules tag was sort of lame.

The tri-state area was skiddish after last year's Frankenstorm, so it's hard to blame everyone for being so skiddish. But most of the time, the fear-mongering media hypes up everything so you cannot separate fact from speculation and hyperbole.

A full day before the storm hit, JetBlue cancelled my flight (which was scheduled couple hours before the storm hit) and re-booked me on the next flight (which was just as the storm was supposed to hit), which ended up getting cancelled. I didn't trust them to re-book me a third time, so I re-booked myself. In order to not get hit with a redonkulous surplus charge, the next available flight was... Monday... or four days after my original departure date.

JetBlue is one of my favorite airlines but even then they've gotten less passenger-friendly and more corporate-bottom-line-conscious. On Wednesday night, they cancelled most flights for Thursday night and everything on Friday. They got too scared about Thursday and could have let flights leave before snowfall, but I got screwed because they were overly cautious.

I should have listened to my brother and opted for refund then bought a flight to somewhere in the south first thing on Thursday and then flew to LA from Charlotte or Atlanta.

After the second flight got cancelled, JetBlue claimed they could get me out on the first flight out on Saturday, but I'd have to pay extra because it was a premium seat... and a middle seat at that. My tall frame and bad back can't handle a middle seat on a six-hour cross-country flight and no one wants to get stuck in between a crying baby and one of those overly religious people wearing all black and reeking of mothballs. I already dropped a pretty penny on the flight and couldn't believe they had the balls to try to fleece me for another $100. Plus, there was no guarantee that the flight would leave on time, so I passed. Unfortunately it was the last seat on the only available flight on Saturday. Sunday's availability was slim (two options... both would have cost me extra dough) and the best I could do without having to pay extra was to re-book for Monday.

Luckily I could stay with family in NYC, otherwise I'd be really screwed and would have to sleep at the airport with all of the other unlucky souls.

At least one good thing came out of it... I could watch a couple of Knicks games with my brother and catch all four NFL Wild Card games with him. But that was about the only positive thing that came out of this mess. Sure, I dearly missed NYC, but I had spent at least two weeks here and I had my fill, especially dealing with crazy family members. Christmas holidays are always a chore and this year was no different.

I was ready to go back to California and wake up in my own bed next to my girlfriend and gaze out at the palm trees across the alley that shoot up out of the ground like the palm tree is on its tiptoes and trying to touch the sun. I had a ton of freelance work that was burning a hole in my desk and I was eager to start the re-write on Fried Peaches. Oh, and how could I forget about the new guitar? 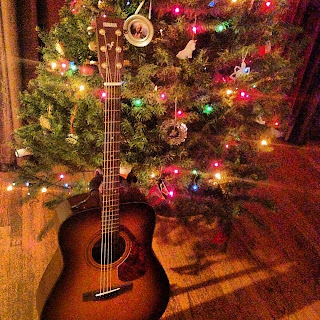 Nicky gifted me an acoustic guitar for Christmas. Something I had waned to buy for years, but never did it because I didn't have spare time to dick around with it because whatever surplus time I had was devoted to writing. But she got me the perfect gift because I'm at a point in my life in which I'm actively trying to set aside to do the things I love and do things I've never done. We exchanged gifts a couple of days before I left for NYC because we spend Christmas with our own families. In a short time before I left for NYC, I played with the new guitar nonstop, so much so, that part of one fingertip was ready to fall off. I finally understood that Ryan Adams lyric, "played it til my fingers bled."

Anyway, stuck in NYC where it's cold and miserable. I miss waking up next to my girlfriend. I mis sitting at my desk and cranking shit out. I miss playing my guitar until my fingers got numb. I even miss the fucking hipsters next door with the ukulele. Hate to say it, but I miss the warmth of LA.