I was told a few months earlier by a Reiki healer that indeed, I had lost my soul during a near-fatal car accident. Missing soul? I knew it. Nothing shocking. I had a huge hole. My cross to bear. I just didn't know how to find it. Or where to find it. Or if I would ever find it. And if I did find it, what would I do with it?

Weird times. Foggy times. As foggy as those nippy afternoons when the fog enveloped my neighborhood in Lower Pacific Heights.

I lived in a late-waking house.

Late meaning that everyone had late-night personalities. Nicky and Halli slept in. Every day. Rarely did they ever wake up before noon. They both stayed up late. Very late. Nocturnal house. Like cats. We were all like cats. Up all night. It's just what we were all doing. It wasn't like we were those Vegas vampires or crack-crazed zombies. Nah. It was much tamer. Our vices kept us up at odd hours.

I could never sleep. Especially in San Francisco. The Vistorian was drafty, which is why Halli dubbed it The Ice Palace. I often slept in a zero-degree sleeping bag. I wanted to move to Colorado, so if Nicky could handle the frigid temps of San Francisco, then I knew she could gut out a Colorado winter.

I was often awake very early. Once the buses started rumbling down our street, it was impossible for a light sleeper like me to stay asleep. Our house shook like a mini-quake. Took me a couple of weeks before I could distinguish a bus rolling down the hill and an actual tremor.

I loved those early mornings when I could not sleep because it felt like I had the entire house to myself. The neighborhood was covered in a medium-shade of grey. Foggy. Cloudy. Fit my mood. I wrote a bunch (rarely hit the PUBLISH button), read books, listened to pods, watched crazy conspiracy docs, and played music at a decent volume in the back of the apartment, which was so long that I could be active in the back and it would be totally cool and not wake up Nicky or Halli.

Some mornings, I just needed to get out of the house. I'd hop on the Metro, zone out to LCD Soundsystem or Coltrane, and take the bus from Lower Pacific Heights to the edge of Chinatown where it rubbed up against the Tenderloin. The bus itself always carried an eclectic mix of passengers. Melting pot. A few suits. Some office types. A slew of hipsters. Few ancient hippies. Lots of elderly Chinese ladies. And of course... myself... the lone junkie.

The bus rides were uncomfortable. I'd be stoned and dope sick. I was thrilled NOT to be going to work. It felt liberating to not have a specific boss or someone to answer to. I was in the middle of the first legit break I had in years and I stopped cranking out non-stop content for the interwebs -- for both my own sites and for clients. But I was still recovering for a car accident. Still taking pills. Still in main. Still walking around with a gaping hole.

I rode the bus stoned and dope sick. Always dope sick. Everyone morning. Until I grabbed some food and had something in my stomach so I could take my medicine. If I took the meds on an empty stomach, I'd be pretty queasy, which was never fun.

I preferred breakfast at a hipster joint in the Tenderloin staffed by waitresses and each could have been the stereotypical 20-something in San Francisco... Emo, nu-punk, Occupy-activist, Geek-chic, art school drop out, neo-hippie, retro-hipster, lipstick lesbians, po-mo-hipster, Burner, angry rich girl drowning in white guilt, and Mipsters (who were denizens of the Mission).

Nicky teased me because the super-hippie-dippy girl always hit on me. She was really in love with Halli's brother. She was being friendly with me because 1) I tipped well, and 2) She fancied Halli's brother and knew we were friends.

She actually dropped the line, "Didn't I see you at Occupy general assembly the other night?" In October 2011, that was a killer pick-up line in the Bay Area.

After I crushed an omelet and drank a pitcher of iced tea, then I could finally take my medicine. Normal... for a short period of time. But normal. Finally.

I wandered down the street to a hole-in-the-wall donut joint that had gigantic apple fritters. I picked one up...to go. The old Chinese lady behind the counter put it in a white paper bag. It about six minutes, it would soak through with grease. I saved the donut for later. Always for later.

Some days, I got back on the bus and rode it up and down the hills of Chinatown before it dumped me off at the tip of the business district and the Embarcadero. I'd kill some time people watching (almost all tourists) before I walked over to the first stop.

Some other days after omelets at the diner, I walked around the Tenderloin to check out all the sketchy shit. Humanity. Rearing its ugly head. You'll never get that stench of urine out of your memory. You know the folks who slip though the cracks of society? They end up in the Tenderloin. Sad, yet disgusting pastiche of rejects from a Diane Arbus photo shoot and something out of your worst dystopian nightmare.

After a dose of reality and as soon as the pharmies kicked in, I hopped back on the bus. Typically, the bus driver gave you a transfer slip when you paid your fare. You had to complete your trip in a set time indicated on the slip of paper, but that was a formality. It really didn't matter if it expired. I never once saw a bus driver actually look at a transfer slip.

So long as you... 1) were not going to slash him/her in the face, and 2) had clothes on, and 3) was not completely bat shit crazy... then the driver let you on the bus.

Dope sick and faded and freaky looking, I was by far the least disheveled individual riding the Metro in SF. In a world of freaks, I blended in and became somewhat invisible.

I listened to more music. Some sad. Some ironic. Some of lifted my spirits. I gazed out the windows of the bus. Somewhat somber. Somewhat bittersweet. Sort of dreamlike. Sometimes it felt like I was caught in my own dream. In a dream loop. Line a 37-second vine that went on for infinity. Stuck in the loop until I finally woke up from my dream.

Until that wakening happened, I had no choice but to sit and look out the window. Life whizzing by. Seeking anything resembling a wispy appearance of my vanished soul.

The rides back post-morning rush hour were usually one-sided. Mostly empty, except myself and a mix of weary old Chinese ladies with plastic bags filled with veggies and fruits and fish and other items they purchased in Chinatown that morning.

Most of the time I took the bus from the TL to the last stop. Way past Richmond and Outer Richmond. Near Sea Cliff. I wandered down Geary to Sutro Heights Park. I hung out there for as long as I felt it was necessary to gaze out at the Pacific Ocean. 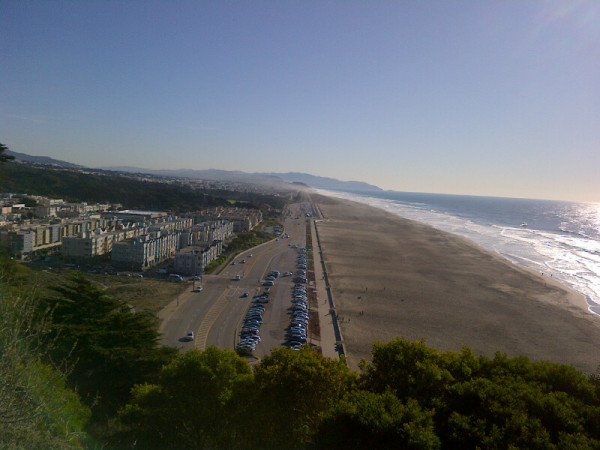 Sometimes I ate the apple fritter. Sometimes I let the waves mesmerize me. I controlled the music. The soundtrack to my life.

I stayed until the fog started to roll in, or until the dreaded melancholy subsided into palatable sadness. Then I walked back down Geary to the bus stop. Hopped back on the bus, gazed out the window at all the pedestrians, sneering at the hipsters, feeling compassion for the street people, wondering if any of those anonymous faces knew where I could find someone who could help me retrieve my soul.

I got off somewhere close to home, but never at the same spot.