The drive down yesterday was relatively quick with no traffic from NYC to Atlantic City. I arrived at the Borgata around 11 AM. My room wouldn't be ready for a while so I hit the buffet first. The salmon was tasty along with the fried chicken and cajun rice. The brisket was just OK, could have been better. They still had some breakfast foods left over and I made a sausage and bacon biscuit. The eclairs for dessert were tasty along with the gelato. The Borgata has great gelato.

I hit the poker room and played for almost two hours. I left up $8 or won $4 an hour. I met up with Michael who told me that my room was ready. I got the 40th floor with a great view of the ocean and all the casinos on the boardwalk. Not too bad. The rooms are swanky and also include a safe and a mini-fridge.

We met some of the people we're working for in the Public Realtions, Marketing, and Poker departments. With the Borgata being as big as it is along with being a corporate casino, there's plenty of freedom for me. They aren't going to be sitting over my shoulder. The Borgata hires professional contractors and I fall under that descrption. Let's hope I don't let them down. Otherwise, I get booted from my nice room. 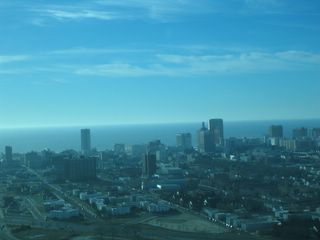 Last night, I wrote a freelance article, played some online poker, and then watched a little TV and the Knicks game. Late night, I could not sleep and headed down to the poker room to play until 3 AM or so. I lost a few dollars. Nothing of significance.

This morning I woke up, wrote, watched Dawson's Creek, then showered. The showers here kick ass and have a bench inside. The water pressure is strong, which I'm a big fan of. They also have clearly labeled nobs with actual water tempatures on it so you can pick a cold shower or hot shower. Awesome. The mint-thyme soap was an added bonus.