I went to stroke my beard that wasn't there. That was forty-five seconds ago. I always run my hand over my chin before I start writing something. I quickly noticed that my chin was smooth to the touch. The scruff was gone. I had not shaved since my grandmother died. I did a fifteen minute job in about six and a half minutes this morning. I was late and rushed the shaving process and didn't get cut which astonished me. When I used to shave everyday, I had a routine down. 15 minutes to shit, shower, and shave. I know. That's remarkable. I had a turn around time in less than 30 minutes from the time I got out of bed until the time I put on a suit and walked out the front door. Those days of speed morning were over. And this morning I wished I had my old routine down pat. It took twice as long to get ready.

Yesterday I told my barber Vinny that I'd stop by at 9:30 to see him. Late for a haircut, but with a clean face. Now I look about five years young and feel about six pounds lighter. Plus my thinning hairline an expanding bald spot looks smaller when my hair is shorter. Vinny had been cutting my hair for over twenty years. He's seen the best and the worst of my head from short hair to long hair back to short hair and now to losing my hair. Our conversations are never specific and flows back and forth between a number of topics. Inside of a half hour we talked about the Yankees chances this year, the awful weather, playing golf at the Wynn Casino in Las Vegas, and I briefly explained what small cap stocks were. I did all that before you had your first cup of coffee.

Yesterday I bumped into some guy I grew up with. Pedro lived in the apartment building down the street and we went to grammar school together. Long story short, he was a former cracker dealer who went to jail. When I saw him yesterday, he was with his wife and driving a brand new Mercedes.

"Things have changed. This is my new wife. I got three kids and a fourth on the way," he told me as he pointed to his wife's stomach.

Pedro knocked up one of the neighborhood girls when we were in highschool. I think she had two kids with Pedro. She seemed like a nice girl but for the life of me I kept wondering, "What the hell are you doing with a crack dealer?"

In the late 1980s, when crack was the cash cow in New York City, Pedro took advantage. he started out in an entry level position. He dropped out of highschool and sold nickel bags of weed to kids who would cut class and hang out in the park to get high. He eventually started scamming the private school kids and sold them oregano and other spices. If you complained he beat your ass to a bloody pulp. Rich Jewish kids were not going to mess with a crazy Puerto Rican with a loaded gun and a pitbull. 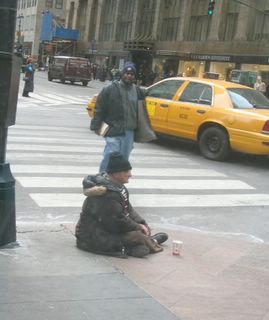 Pedro eventually graduated from low level thuggery to middle level drug dealing. He started out at the bottom as a look out, then a runner, then a full on dealer. He would hang out at bus stops and at subway stops and deal his goods as people got on and off mass transit. His peak sales happened during rush hours, when his highly addictive clients would step off the subway and Pedro would be waiting there for a $20 or $40 rock. And it wasn't just poor people smoking crack. Tons of suits and functioning drug addicts with real jobs were part of his expanding customer base. When I was in college in the early 1990s, I heard that he got busted and went to prison upstate.

Years later I bump into him on the way to the subway. Mercedes? How was he making those car payments? The world finally made sense to me now. Former imprisoned crack dealers with four kids are rewarded with luxury German cars late in life. I should have skipped college altogether and started dealing smack in Phuket.

* * * * *
On the subway, I saw a chubby black woman wearing an orange jump suit with Uggs. Except the Uggs were knock offs and they were actually called Iggs. The orange jumpsuit hurt my eyes and I wished I had my sunglasses. She had gang tattoos on her hands and listened to an old school Walkman. She thumbed through an old copy of People Magazine with Jessica Simpson and Nick Lachey on the cover. Sitting next to her was the guy who ate is entire breakfast on the train. He got bacon, eggs, sausage and pancakes from a diner. They put it in an aluminum take out container and he struggled to eat everything in his lap. I admired his efforts and the bacon smelled good.

A guy wearing a fur coat got on at the next stop. He carried an oversized Hefty garbage bag with him and stood in the center of the car. His fur coat looked like it was made out of some sort of rabbit or raccoon. The lady in the orange jumpsuit started making fun of him.

"How many dogs you kill for that?"

He ignored her and she continued to taunt him. That happened for three more stops. When he was about to get off, he walked over to the lady in the orange jumpsuit and slapped her. Twice. Her Walkman fell onto the floor and she knocked over the breakfast of the guy sitting next to him. A piece of half eaten bacon slid a few inches away from my right foot. The guy in he fur coat ran out of the car when the doors opened.

Bitch slapped on the subway.

I met Jessica for lunch in Midtown and we both ate bacon cheeseburgers at a diner. On our way, I spotted a bum sitting on a corner of 42nd Street and Madison Ave. panhandling for change. (Editor's note: He's the guy who appears in the picture above.) I gave him $2. Last night I almost won $200 on Poker Stars. Coincidence? I have a theory that the amount of money I win playing online poker is directly proportional to the amount of money I donate to worthy causes, like handing out singles to bums on the subway.

Briana kept pestering me about the book yesterday afternoon.

"I left you alone for two weeks and didn't ask once. You have to let me read it."

"No way. You know my policy. No one reads it until the first draft is done."

"It's my birthday coming up and I know you haven't gotten me anything."

She was right on both accounts. Shopping for Briana is hard. When you are a spoiled heiress who has everything, what do you get them?

"You can let me read your book. That's my birthday wish," she asked and did the seductive sexy look women do when they want something really badly.

"Jesus Christ McFucker. Just let me see what you got."

I told her no. I wanted to make her sweat. Of course I was going to see it. Letting her read the Las Vegas manuscript saved me a couple hundred bucks. But I wasn't going to let her win so quickly.

We ended up hanging out, getting high, and watching movies. It wasn't anything too exciting, but the weather was so crappy that walking around seemed like a bad idea. Plus Briana was wicked hung over after Jenna's Golden Globes Party. Two years ago, I used to hang out in bars with Briana on weekday afternoons and we'd shoot the shit about how absurd life was which why we chose not to work and drink in bars. I'd run up a healthy tab which she always paid. Last year we spent a lot of time in diners talking about how absurd life was especially since I was finally making money to write. I offered to pay for our meals. Always. But she declined. The most pissed off I ever saw Briana get was when I paid for bill one day. She had gone to the bathroom and the waitress brought the check over. It was the diner near her apartment and it wasn't much. I paid the waitress. Alas, Briana was furious when she got back from the bathroom. I've done at least six or seven horrible things that she should have gotten more pissed off about and she didn't.

Briana's birthday is next week and we said we'd do something tonight since I'll be away for two weeks on assignment in Atlantic City starting tomorrow. I'll give her the manuscript tonight, well only parts of it.