We lost an hour of sleep due to Daylight Savings Time. Alas, it was another slow day getting out of the gate. Since it was the Joker's birthday, we went to Chili's for lunch and margaritas before driving to the show. I don't know why, but there was stand-still traffic getting into the show and it took about thirty-five minutes longer to get in than it had been on the first two days. Was Widespread Panic pulling in all those folks? 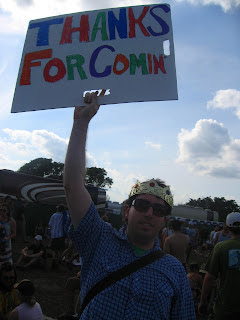 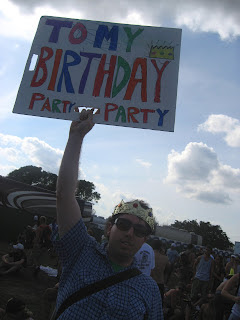 Happy Birthday, Joker!
Due to logistics, we skipped the Spam All-Stars and the New Orleans Social Club. The NOSC is a band made of New Orleans musicians that settled in Austin after Hurricane Katrina such as a few guys from the Meters (Leo Neocentelli and George Porter, Jr.) along with Henry Butler, Ivan Neville, and Ray Webber.

Wilkins said some positive things about Pepper and I wanted to check out the end of their set, but the intense traffic prevented us for seeing them. Pepper is a SoCal trio that features a heavy Hawaiian music influence along reggae-rots and toss in some a serious head-banging edge. We also missed Band of Horses from Seattle. Two of the members were originally from Carissa's Weird, and now Band of Horses are on now the infamous Sub Pop record label. They have been getting a lot of comparisons to Built to Spill, but I don't hear that.

We caught the end of Taj Mahal's set and some of Rodrigo Y Gabriela. They are two Mexican acoustic guitar players based out of Dublin. Those boys can play. We made our way to the back of the festival grounds by the Everglades stage. The are was jam packed and I had not seen so many people during the first two days. Part of that had to do with Panic as a lot of fans from the South drove down to catch the last day of Langerado. I also think that Matisyahu and Panic were bigger attractions than the indie rock bands which caused a lopsided distribution of people at Langerado on Sunday.

Toots & the Maytals have been around since the late 1960s and it was amazing to catch the pioneers of reggae at Langerado. They played a few of their classic tunes such as "54-46" which has been covered by numerous bands. Once their set ended, we moved into place and secure a spot for our basecamp for both Matisyahu and Panic as Pablo and Chris finally arrived.

I skipped Los Lobos and sat around waiting for Hasidic reggae rocker Matisyahu. He played another amazing set full of energy. He appeals to people of all races and religions and focuses on providing universal messages in his music as he preaches love and harmony and spiritual awareness in all beings. At one point he headed up to the VIP tower and was seen dancing around with his posse. 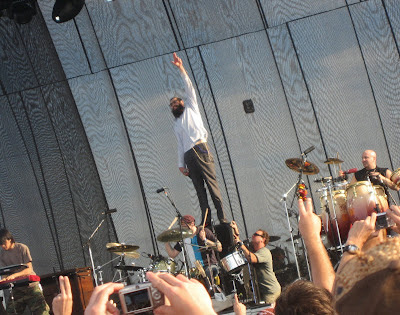 Matisyahu points to the sky 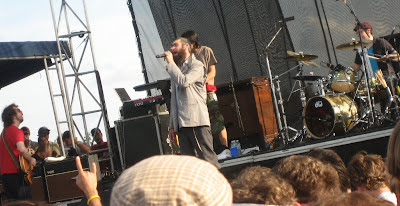 Matisyahu
I skipped Cat Power. We caught Chan Marshall and her band at Vegoose and it was a decent set, but I wasn't about to miss Matisyahu to truck over to the indie rock tent to see her cover the Stones' Satisfaction. I heard she also covered Gnarls Barkley's popular tune Crazy at Langerado. Although I've seen OAR, I must admit that I'm not a fan and had no problem skipping the Maryland band. I could hear a few faint traces of their set as we waited for Panic to come on.

Nicky, Pablo, and Chris headed over to the indie rock tent to catch Explosions in the Sky. The Austin based band formed sometime around 1999. I caught them at some point in Austin, but they were going under a different name. The band is known for it's extremely loud and mind-numbing instruments. There are no lyrics or vocals in their songs. The band is made up of a drummer and three guitar players. One of those guys sometimes plays bass. Explosions in the Sky got notoriety when they scored the soundtrack to Friday Night Lights.

Nicky saw a few songs and found her way back to our spot for Widespread Panic. I was shocked that she was able to find her way back. By then, the Joker and I had been drinking and settling in for the show. We were excited for the new era of Widespread Panic featuring Jimmy Herring on guitar. The last time I saw Panic was at Vegoose and their Halloween show in Las Vegas. And the last time Panic played was New Years Eve. They had been off for about ten weeks as Langerado was the unofficial kick off to their summer tour.

Usually bands don't play their best at festivals due to so many circumstances that they cannot control. The sound is always slightly off because the crew has less than an hour to set everything up. Plus you never know what to expect with regard to the weather, atmosphere, crowd, and time the band is scheduled to play. Panic seemed to be in the best possible spot. Just like at Vegoose in October, they were the headliner closing out the entire festival. They put out an excellent effort at Vegoose and I was hoping for some more magic.

Widespread Panic
The set started out with Hope in a Hopeless World. I had seen that a few times before. I must admit, it was one of the last songs I wanted to hear, especially for the opener. They made up for it in a warm Space Wrangler as the crowd got a little more into the set. They played above average during the next four songs; Time Zones, Makes Sense to Me, Bust It Big, and Radio Child. Then things heated up quickly with Pilgrims > Wonderin > Diner > Lover Tractor. After drums and a brief jam, they segued into Driving Song > Surprise Valley > Driving Song. Jimmy Herring took over during that period and ripped up a nasty display of psychedelic soloing.

The last three songs were played well, but I didn't expect to see Walkin, From the Cradle, and Give. Those are Set 1 closers... not a festival closer. I dunno if Panic went over their time limit or expected a ten minute extension, but they abruptly ended their set after Give. No encore. Nadda. After Give, they left the stage and the house lights came on. Langerado was over.
by Pauly at 3/12/2007 08:44:00 PM