Book Review: The Happiest Days of Our Lives by Wil Wheaton

Let me start this review with a disclaimer. I'm buddies with Wil Wheaton and got to know him very well when we both wrote for Poker Stars together during the 2006 World Series of Poker. And yes, he thanked me in his acknowledgments section. I was both shocked, humbled, and honored! Thanks Wil. Now, onto the review... 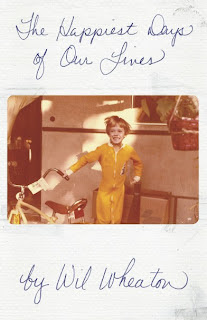 I'm a writer, but I'm also a reader and read as much as I can. The books that strike me the most are the ones that provoke thought... not just when you're reading, but after you put the book down. The most meaningful and profound books in my life are the ones that continue to evoke memories days, weeks, months, and years after your read it for the first time.

Very few authors are able to connect with their readers, but Wil Wheaton is not like most writers. His words are like a sleeper cell. You have no idea they have penetrated deep inside of you, then they spring to life and attack your senses when you least expect it.

I bought The Happiest Days of Our Lives and I was excited to find it in the heap of mail I sorted through after a long trip to Australia. Wheaton is a big fan of Pink Floyd and I was pleased to hear that he titled his book after one of the songs that appeared on The Wall. The Happiest Days of Our Lives was the fourth track on disc one in between Another Brick in the Wall Part 1 and Part 2.

The Happiest Days of Our Lives is Wheaton's third book. This current collection of short stories at some point appeared on Wheaton's blog over the last couple of years. While childhood and family (both then and now) are some of the common themes in these short stories, the main thread is dominated by the evolution of Wil Wheaton the geek.

As Wheaton explained, "I really like to write stories about those things that we all have in common. Our generation has a lot in common, no matter where we grew up."

Wheaton and I do share a lot in common. We were both born in 1972. We were children of the 1970s and were subjected to roughly the same pop culture experiences. We're also writers who found our voices in our late 20s and early 30s.

Much like Wheaton's formative years, we grew up without cable TV and the internet, so a lot of our childhood activities surrounded games and toys. One short story titled Blue Light Special stood out. When Wil was nine, he went to Kmart with his mother and siblings. He stumbled upon the Stars Wars toy section he found himself with a tough decision... buy a toy now or save up for one of the bigger playsets, like the Millennium Falcon.

In an interview with Boing Boing, Wheaton admitted that this story was also his favorite in the bunch. Blue Light Special trigged so many memories that I spaced out for over an hour thinking about trips to the toy store and agonizing over which figure I'd buy. It really became a problem later on when I grew out of my Star Wars phase and really got into G.I. Joe, and I had to decide on a figure or save up for a kick ass military vehicles.

In Portrait of the Artist as a Young Geek, Wheaton discussed his foray into Dungeons and Dragons and his love for his special dice. After I finished the book, I went digging through some old boxes trying to find my copy of Monster Manual and desperately tried to find my old set of D&D dice, which we used for Stratomatic baseball.

The last four pieces in the book are among the longest and strongest, starting with the Young Geek story. The most touching story happened a couple of years ago and involved the illness one of the family pets. For all you Star Trek fans, in The Big Goodbye, Wheaton wrote about his experiences returning to the Paramount lots to shoot some spots for the Star Trek: The Next Generation DVD.

And Wheaton saved his best story for last. Lying in Odessa is about his experiences playing in an underground poker game in Los Angeles for the first time. It is probably his best piece of poker-themed writing and is among my all-time favorite Wil Wheaton stories. I was pleasantly surprised to discover that he included that in his book.

Probably the hardest part about reading any of Wheaton's books is that I'm constantly day dreaming while I'm supposed to be reading it. My thoughts drift because his words instantly trigger flashbacks and old memories. That's a powerful gift to have.

My only complaint was that the book was too short. I wanted more. I equate Wheaton's style to Hemingway in the sense that he has an amazing economy of words. The result is short but powerfully loaded pieces. Although the book physically contains only thirteen short stories, the impact is much greater. The stories, images, and memories that Wheaton stirs up inside your head continues to fester and entertain and inspire you long after you're done reading his last page.

I have read Wheaton's other books and The Happiest Days of Our Lives is by far my favorite. Do yourself a favor and buy two copies; one for you and one for a friend. Heck, buy several. They'll make great stocking stuffers this Christmas.