Evolution of a Drink

During catholic grammar school, I drank a can of red Hawaiian punch. Every day. Sometimes, my mother threw me a loop and gave me a Capri Sun tropical punch instead.

In high school, the cafeteria sold Quick chocolate milk. That was my morning drink of choice. I'd always get a Quick to start the day. They also sold bacon and egg sandwiches. I asked for them with just bacon. Nothing but a kaiser roll and six or seven greasy layers of bacon. Quick + bacon sandwich is how I recall every morning of my high school days. 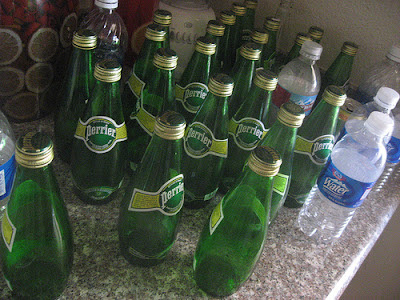 I went to a college that was nicknamed Coca Cola U since the founder of Coke had sent my college millions and millions in donations. The result? Coke machines all over campus. I think they sold cokes for as little as 25 cents and as high as 50 cents. I drank a ton of coke. I also drank a lot of Mr. Pibb, which is Coke's version of Dr. Pepper.

My cocktail of choice was Jim Beam (what we called The Nectar of the Gods) and diet coke too. I can't drink diet coke anymore because it reminds me of drinking too much Jim Beam. Too many rough nights I'd like to forget.

We also drank a lot of Barton's vodka which came in shatter proof plastic bottles and was so strong that it could eat the paint right off your car. The older guys in my fraternity made this drink called Bullfrogs, which was Barton's vodka, OJ, and Wink soda (a version of Sprite sold at Piggly Wiggly).

I also drank a lot of beer courtesy of being a frat guy. I liked Moosehead but I think that's just because Rocky's liquor store always had specials. We drank a ton of shit beer including but not limited to Natural Light, Beast, Beast Lite, Schaefer, Bud Light, and even Coors Light. I also developed a fondess for Killian's Red and Red Stripe, which I considered high end beers. Dooley's, one bar I frequented, had pitchers of PBR for $2.50 on Tuesday nights.

Towards the end of my four year stint in Atlanta, I grew fond of sweet tea. I continue to drink iced tea to this day. I switch back and forth between sweet tea and unsweetened tea. Sometimes, I just wanna control my own level of sweetness. But whenever I'm in the South, I go for the local sweet tea.

After college, I moved back to NYC and drank vodka. My mentor on Wall Street told me that it's tougher to smell vodka on your breath, so it's a perfect thing to drink during lunch. Vodka tonics after work were my drink, or vodka and grapefruit juice when I was drinking during the day hours.

I drank a ton of coffee between the ages of 22-25. Good stuff. Bad stuff. Gourmet like Ethiopia Yrgacheffe. Or shit sludge from the coffee machine at the office. I used to get Hazelnut coffee in a large Styrofoam cup from a tiny coffeeshop on Nassau Street. They also made me bacon and cheese sandwiches on a Kaiser roll.

I started drinking Brooklyn Lager when I moved to Brooklyn because I wanted to be a hipster and because the bodega around the corner sold Lager at a discount.

I moved to Seattle and drank more green tea because that's what the hippies drank. It's funny that I quit drinking coffee when I moved to Seattle. But that's what happened. I also dug Henry Wienhard's lager since it was so fuckin' cheap for a 12 pack. I drank a lot of local brews. Some of them were good. Others gave me the beer shits. The hippies liked to pass around a large jug of cheap red wine and I drank that a lot. I preferred the local homegrown weed to booze though. When I drank soda, I drank generic cola that I'd buy from the Safeway down the street.

My friend Ty bartended at a restaurant in downtown Seattle. He introduced me to Absolute Citron and 7-Up. That stuff tasted like gold and went down so smooth. I was quickly hooked and he'd only charge me for every other drink I ordered and even then, he rang me up as a well-vodka drink.

When I moved back to NYC, I developed a wicked addiction to painkillers, so as long as I popped a couple, one drink would make me loopy. I drank a lot of Arizona iced tea which came in these large light green bottles.

At that point, my brother had some acid reflux issues and gave up drinking soda. I joined him and quit. That's at the same time I began to consume a ton of water and only iced tea. I gave up hard liquor and only drank beer. I got hooked on Carlsberg.

Then I went through a Snapple iced tea phase and I'd drink three or four a day, sometimes more. It was getting out of control for a while.

I met a girl who liked drinking gin and tonics and I began a gin phase. That ended quickly. Gin hangovers were as bad as red wine hangovers. Vicious. I vowed to never drink gin ever again.

After a Phish show at Deer Creek in 2003, I was parched after partying all day and night. The Joker fished an Orange gatorade out of his cooler. It had been sitting in there all day and was extremely cold. I'll never forget that moment. One of the best satisfying drinks I ever had. I was hooked on Orange Gatorade for several years.

I started to ween myself off SoCo and shifted towards Makers Mark and gingerale during the 2006 WSOP. My buddy StB drank those as well. It gave a bigger punch than SoCo and the gingerale settled my stomach.

In Australia, Graham introduced me to James Boags Lager, which was a Tasmanian Beer. I drank it wherever I went in Oz. I started drinking Perrier because of the crazy hangovers I got when I drank too much then had to go to work the next morning during my assignment in Oz. I discovered that the Perrier settled my stomach the next morning. I've been drinking a lot of that ever since. I drank a lot of Shiraz when I was in Oz and the best part of that red wine is you can drink a bottle or two of it and not get a horrible hangover.
by Pauly at 11/18/2007 03:58:00 PM