I spent a lot of my insomnia driven hours listening to John Coltrane and writing weird stuff in Nicky's living room. Nothing essential. Just practicing. Expanding. Experimenting. I'm trying to get my writing mind in top shape to sit down and have a short and productive stint when I get back to NYC. I figured that I can get seven solid days of writing in - if I blazed through catch up work done while I was still in Hollyweird and got my entire shit together within 48 hours of returning to NYC. It's a long shot, but I'm doing what I can. 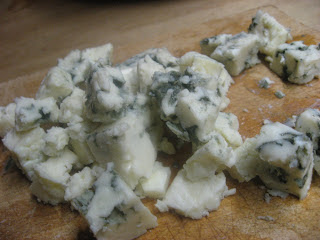 Nicky cooked for me on Sunday morning. Just at the same time Showcase's very Jewish Long Island mother popped in. She was a sweet person and not as horrible as they both described. I'm sure they were hamming it up for dramatic effect. Anyway, I was up and writing when Nicky woke up and headed to the kitchen. She whipped up bacon and eggs with English muffins. The eggs were fluffy and sprinkled with chipolte cheddar cheese. I put them on the English muffin and added bacon for an impromptu breakfast sandwich.

Showcase's mother left and they headed to see a movie. I watched football and uploaded over 100 pics from Australia. I took several hundred more, but have been much better about selecting certain shots for the gallery.

In an random side note, I have been interacting with random people in the Flickr community since I joined up last year. I have been getting random mails from moderators of certain groups to join or they request that I add a certain photo to their group page. I always oblige. Most recently, I've been approached by random editors of travel guides if they could use my photos for both websites and travel book publications. Most of them are given away for free with attribution and I have been offered a few bucks for others. Nothing of significance. The most recent picture picked up was something I took at the Picasso Museum in Barcelona.

So weird that has been happening. And it's the pics that I thought were mediocre or blah that others found fascinating. Photography is much like writing. The stuff that I create which I think is the cat's balls often gets overlooked. And it's the stuff that I consider "throw away pieces" that end up getting the critical acclaim and are instant hits among the masses. Once again I have absolutely no comprehension of the public's assessment of my creative work. Then again I actually do know the formula. If I think it is great, they won't. If I think it's shit, they'll dig it. If it were only that easy.

I've been too busy to explore and familiarize myself with that bustling photo community over at Flickr. Someday I will. I've had some of my poker photography published before in poker magazines but, I was more concerned with the writing in those issues than the pics. But the most recent interest in the travel pics baffled me. It's nice to sell a photo, but I have yet to sell a single travel story to a non-poker or gambling publication!

On Sunday afternoon, we headed over to Whole Foods to pick up supplies for dinner. Nicky was going to grill up filet mignon for myself and the rest of her family at her parent's house. I've been over a few times for BBQs and it's not as big as a drama as Nicky expects it to be. Anyway, she prepped all the food and made a similar dish that she did before we left for Oz. She made filets which sat on a bed of onions, green beans, and shitake mushrooms with bleu cheese sprinkled on top. I picked out the bleu cheese at went for an expensive batch of Roquefort (see photo above). It was so good I kept spreading it on bread. Anyway, the dinner was a complete success.

We got back and Showcase said there was a great episode of Iron Chef on. It was Rachel Ray vs. Giada De Laurentiis but they added a twist and Ray teamed up with Mario Batali while Giada teamed up with Bobby Flay. Their secret ingredient were cranberries. I knew right away that Rachel Ray was going to win because she's a fast cooker. Giada might make more high end Italian dishes, but Ray's "30 minute meals" abilities were better fit for the Iron Chef competition. I found out this random nugget.... although she was born in Italy, Giada went to the same high school as Nicky in Westwood, except they attended at different times.

Woke up early on Monday and wrote for a bit before Nicky got up and we went to Nick's Coffeeshop, which I always do on the day I leave Hollyweird. Since it was Veteran's Day, Nick's grandkids were working and bussing tables, ringing up the register, fetching drinks. It was cute but Nick's kids have been working there since he opened up three decades ago,

I had a stress free travel day. It was about time I had one of those. No traffic to Long Beach airport. No lines at check in. A slight wait at security was the only problem. My JetBlue flight from the Left Coast to NYC left on time and arrived on time. I watched Monday Night Football (Niners defeated in an ugly blowout couresty of the Seachickens) and the latest episode of Heroes. I also killed time with a rockumentary on The Who. Keith Moon was a fucking animal, man.

I traveled super light this leg. It's been part of my new philosophy in life to simplify things as I've taken on a more minimalist approach to almost everything I do. I ditched my bulky thick wallet that used to look like George Costanza's monster. BG suggested I try a slimmy wallet and I bought one last Christmas. I used it a lot when I went overseas and since I spent 40% of 2007 overseas, I got used to using the slimmy.

I also left my big backpack at Nicky's place. I had been traveling extremely light. especially during my six-week trip to Europe and this past assignment in Australia. I decided I didn't needed to lug all that stuff to NYC since I would be back to Hollyweird in three weeks (then drive to Las Vegas) and fly back to NYC for Christmas, then back to Hollyweird for NYE, then I have to go back to Oz in January. I had plenty of clothes in NYC, so in order to skip the lines at baggage claim, I went to the airport with the clothes on my back and a small carry on bag with me with only my laptop, a book, a fleece pullover, and iPod. I walked off the plane and headed right to the taxi line at JFK.

I was swarmed by gypsy cab drivers who were looking for a fare. I got close to the taxi stand and saw about a dozen people waiting... with no cabs at all in the line. This one Middle Eastern guy asked me if I wanted a ride.

"Hey there's no cabs here," he said as he pointed to the stand.

He was right and I asked him how much would it cost to Riverdale.

"How much do you want to pay?"

Time to haggle. $65 was my counter offer. He wouldn't budge. By then two other drivers wandered over. By their accents, I could tell one guy was Jamaican and the other was Haitian.

"Which one of you guys wants to take me to Riverdale for $65?"

There was an uncomfortable silence for about thirty seconds when the Haitian blinked first. He stepped forward and pointed to his Lincoln Town Car.