I spent my last three days in Victoria on a road trip with Nicky driving the Great Ocean Road, including an entire day on Philip Island. After being inside a casino for ten plus days, we were looking to explore the fantastic country and spend as much time as possible outdoors.

We rented a car and Nicky quickly got used to driving on the wrong side of the road. Most of the cars on the Great Ocean Road are from tourists checking out the Australian equivalent of the Pacific Coast Highway. It's one of those things to do if you visit Melbourne since the road starts only ninety minutes away from the outskirts of the city.

We left Melbourne and listened to a few CDs that I burned specifically for the trip. We passed through a suburban enclave called Geelong before caught the stretch of highway known as the Great Ocean Road. It was beautiful and majestic and the photos I took did not do the area justice. Parts of it were stunning while other parts did not compare to PCH in California.

We drove for several hours as the road hugged the coast before it went inland through Port Campbell National Park's dense forest area. You could see feral koalas in the trees. We also had to drive through some of the rolling hills of the countryside which included lots of farm animals like cattle, horses, and sheep. Nicky had never seen sheep before and the fields were cluttered with thousands of them. 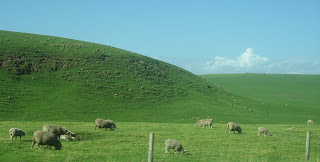 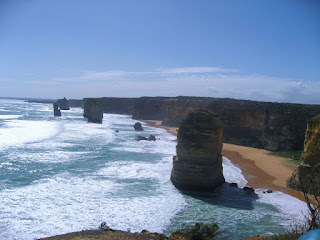 The Twelve Apostles
We made our way to the Twelve Apostles, a collection of limestone stacks that stand just off the cliffs near Port Campbell National Park. There were originally twelve of them, but due to intense wind and sea erosion, only nine of them are left standing. The sight is impressive and reminds you about how powerful nature is. I always leave places like that with a humble feeling, knowing that my life is just a tiny blip compared to nature.

I guess that's why my initial reaction to the sights where that I had been wasting my time as a writer and allowed several years to pass by without evolving. I've felt that my ability has been stuck in the same phase for several years. I've been wanting to experiment with new approaches to writing and have a slew of creative projects that I'd like to pursue. Sadly, I don't have the time to do either since I'm caught up in that eternal struggle between art and commerce. I've been focusing more on commerce the last few years and finally gave in and accepted my role as an entertainer and not as a writer. I've been compensated well for that but over the last few months I have been wanting to break out and go my own way.

Luckily Bluff Magazine gave me an opportunity to write more creatively within the poker and gambling genre. But that's more like putting a band-aid on a gushing wound. I need more. When I bottle up all that angst and frustration, and I'm not allowed to create, it spills over into my personal life and depression seethes underneath the surface. I've been swept up in that metamorphosis more and more over the last year. I'm going to have to do something about it soon and come up with a solution and balanced life where I can continue the obligations and responsibilities that I have and at the same time, blaze a new trail that will make me content as a writer and allow me to unleash everything I have inside.

Most creative types have problems with their inability to have something to say. My problem is that I have too much and not enough time to say it. In short, not being able to channel that creatively has been making me a little crazy, more so than usual. For the first time since all of this started to happen, I finally understood what was going on. It takes these long drives along the water to get my shit together. I've been so busy the last year or so that I had not had the time to sit and think.

All that emotional wrestling made me exhausted. By the time we pulled into Lorne, I kept dozing off. We eventually stopped and spent the night. Our motel/inn was on a hill overlooking the water. We wandered around looking for a place to eat. Since it was almost 9pm and still the offseason, the majority of the restaurants were closed. We found one and I didn't dig my dinner but the dessert was fantastic. Mississippi chocolate mud pie. 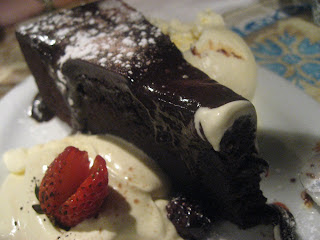 We woke up early the next day and ate breakfast at a beachside cafe. It's not everyday where you get to eat an omelete and watch the waves roll up. We wandered along the beach and took photos. There was also a local artists exhibition where sculptors had their work on display on a path alongside the beach. We checked that out and took more photos. When it began to rain, we decided it was time to drive back to Melbourne. We soaked up the last of the Great Ocean Road before it went back inland and we were bombarded by strip malls and suburban sprawl.

My most memorable day of the entire trip happened on our day long sojourn to Phillip Island, located about two hours outside of Melbourne (on the opposite side of the city where we caught the Great Ocean Road). There's a grand prix there every year and they have a massive track. We didn't see that because Nicky was more interested in seeing koalas. There's a koala preserve on Phillip Island and you can get really close up. Some of them were sleeping when we arrived, which is not uncommon. Koalas sleep up to 20 hours in one day. We arrived near feeding time as rangers put out fresh eucalyptus which drew the koalas a little closer. 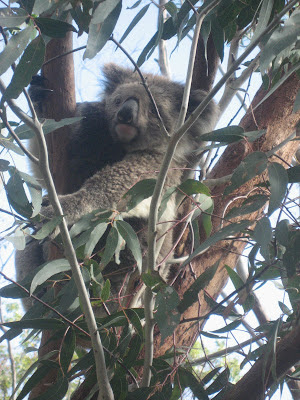 In one area, there were three. At closer inspection, there were five. Two of them were mothers who held their babies close by. We snapped a ton of photos and I took some videos. I'll post the pics/videos eventually when I get a proper internet connection.

We wandered around and saw more koalas and I got bit twice by big bugs. They left marks the size of a US quarter on both of my hands.

After the koalas, we drove out to the Nobbies or the eastern tip of Phillip Island overlooking the water. It's an eco-preserve with lots of unique rock formations. There were thousands of birds and seagulls flying around and a colony of seals on the rocks. With all the birds flying around, it was a scene out of a Hitchcock flick. I expected them to start dive bombing us at any moment. We sidestepped all the bird shit and took a few magnificent flicks of the water, birds, and the Nobbies. 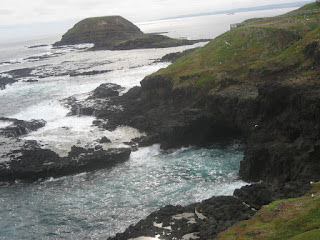 The Nobbies
The biggest attraction to Phillip Island was the infamous penguin march. Every night, hundreds of little penguins (up to 36cm in height) emerge from the ocean and waddle up onto the beach as they nest for the night before waking up at sunrise to head back in the water. We paid a few extra bucks to get an up close look. We waited for an hour in the cold and eventually the first group of little penguins appeared on the beach. A group of about twenty huddled together and they waited for two other small groups to float ashore. They formed a massive circle and began their way up the beach. Some climbed the hills seeking their shelter for the night. Others walked up to 1km inland to find a place. Those walked right past our viewing area.

Some of the penguins were exhausted after being out to sea for days and up to a week at a time. The tired ones literally stopped once they got up on the beach area and onto the grassy knolls. They relaxed before they continued their way. Unfortunately, we couldn't take photos of the penguins. However, it's one of those things you have to witness for yourself. Once the sun went down, in the blink of the eye, hundreds of little penguins were invading the beach.

After ten days inside a casino, I finally got to clear my head and experience nature. Starting out with the Great Ocean Road and ending up with the koalas and penguin march on Phillip Island, I really began to enjoy the first few days of a two month holiday away from the grind of the tournament poker scene.
by Pauly at 11/05/2007 05:06:00 PM