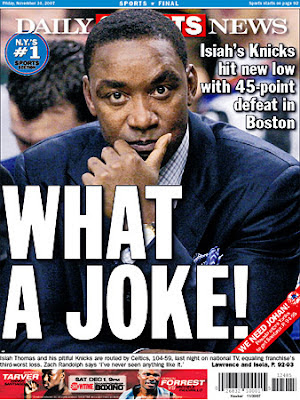 Part of the reason I missed New York City so much was that I missed New York City sports. The fall is always the best because once baseball is over, the scene is dominated by basketball, football, and hockey. Not to mention random college sports, although NYC is not a college sports town. You know you are in trouble when Rutgers is considered out largest local college football team. I enjoy watching college hoops on ESPN, but it has been decades since St. John's was competitive, back in the days of Louie Carnasseca's Cosby-esque sweaters and Chris Mullin (before he became an alkie and a washed up pros hoops player) leading the Redmen to a Final Four.

It's a cold hard fact that New Yorkers don't pay much attention to college sports since there are so many pro sports teams to root for... two NFL teams, two NBA teams, two MLB teams, and three NHL teams.

Alas, upon my return to NYC, two of my favorite teams are in shambles (and I won't even discuss the Yankees debacle, for now). The Jets are bloody awful. The got lucky the other week against Pittsburgh and were aided by the bye week to help them prepare for the Steelers. And now they have to play the Fish, who have not won a game and smell blood against the anemic Jets. It's going to be an ugly game. I told Jerry it's going to be a 9-6 final, if we're lucky.

And then last night, well last night was ugly. I walked out of watching the Knicks game. My brother had to turn it off. Sure we've turned off Knicks games in the past when they blew a 4th quarter lead and we're getting blown out. But this was different. I'm glad that I missed the entire second half against the Celtics. The Knicks lost by 45 and it really should have been much worse. In short, the Knicks are a total embarrassment. I can't think of a worse NY sports team in a very long time.

Stehpon Marbury is a cancer and I was bummed out a few years ago when the Knicks signed him. He's an exciting player to watch, and very few point guards can blow right by a defender like Marbury can. However, the knock against him was that he was too selfish a player and would never be at the helm of a championship team. Shit, I wish Charlie Ward or Chris Childs or even Derek Harper (who is close to 50!) was still playing. Those guys never had the talent that Marbury has... but they have something that made them a better fit for the Knicks... they had heart and they hustled and they wanted to win so much that they were willing to score less and give up the ball to players that were hot. How many times did you see Crawford start to get hot and Marbury dribbles down the court and chucks up a three pointer? Too many times.

Marbury is just the tip of the iceberg. When I was a kid, some of the Knicks teams sucked. Horribly. But they did not have any decent players. The Knicks roster the last five season has been packed with excellent players. The bigger problem is Isiah Thomas who is ruining the Knicks franchise and has made them the laughing stock in the league. The more Knicks bashing I see in the media, the more excited I get because I hope that's the beginning of the end of the Isiah Thomas era in NY Knicks history. Even Charles Barkley had some not so nice things to say at halftime of the Knicks game last night. According to one source, even the Celtics fans were getting in on the Isiah bashing as they were chanting "Fire Isiah!"

I'm so sick of the mess that I can't even watch the Knicks play anymore. At least the Rangers are winning. Chris Drury is having a slow start too and they are still winning, knocking off one of our rivals... the NY Islanders.

If I had one Christmas wish, it would be that Jim Dolan sold the Knicks to Spike Lee and Woody Allen, then they would fire Isiah, dump Marbury, then rehire Jeff Van Gundy, and then finally... everyone who is a Knicks fan would be able to sleep at night.
by Pauly at 11/30/2007 11:05:00 AM