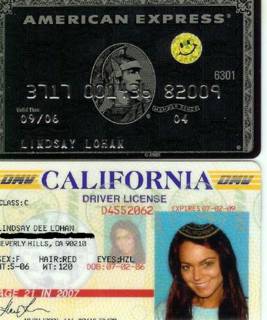 Cokehead? Or just a pothead?

I've been getting bombarded with emails from concerned friends on why I haven't been tallking about the most recent drama in the life of Lindsay Lohan. If you don't know... the other day word hit the web (in an email) that Ms. Lohan left her purse in the back of a NYC taxi. Lost items included an AMEX Black card, her driver's license, and a big bag of cocaine! Wow. If I never saw more proof that she's sliding down the Tara Reid pathdom towards Cokewhore. I was fuckin' irate when I heard the news. That snarky bitch is doing more blow than me these days. You can read the full email here. This is my favorite part:

Inside the cab Charley opened the wallet and found a liscence, an American Express Black card, a $20 bill rolled tight, and a folded up $1 bill. He yells: "Oh my God, guess whos wallet this is!" I said: "Whos? I found it, hand it over!" To my surprise it was Lindsay Lohan's California liscence and credit card! I took out the dollar bill and unfolded it to find a rather large bag of what looked to be cocaine! I couldnt believe my eyes! We had a pop star's wallet with illegal drugs and she's only 18! The first thing that came to mind was to blackmail for a large amount of cash or a casting in her next movie...

Now unfortunately, this is just another hoax as reported by Defamer.com. So someone made it all up. Everyone jumped at the bait. Funny thing was that during Turkey Day, pics hit the internet of Lindsay's friends smoking a fat blunt in an SUV that she was riding shotgun in. So is she a pothead or cokehead?

That leaves me with an idea...

5 Actresses I Would NOT Want to Do Cocaine With...
1. Julia Roberts
2. Angelina Jolie
3. Cameron Diaz
4. Britney Murphy
5. Courtney Love

I really think that none of them would shut the hell up and completely kill the buzz. Nothing is worse than being stuck in a bathroom snorting lines with an insecure actress for thirty-five minutes straight while she yammers on about herself the entire time. And Courtney Love is in the Top 5 because... well, she's just plain nasty.