I just got more good news about the Holiday Classic in Las Vegas. Linda from Poker Works is going to be playing! She is the author of a poker journal where she talks about her job as a poker dealer at the Bellagio. I mentioned her before in my blog and posted parts of her write up of the night she was dealing to Matt Damon and Ben Affleck at the Bellagio.

Otis mentioned something to me the other day about inviting her. He sent Linda an email and she's in. We now have 28 confirmed players with a few maybes. And of course Daddy from Snail Trax is in! He called me today and said he was booking his flight. Sickness will ensue.

Wil sent me an email regretting that he will not be able to attend. His comedy show is opening the same night! We wish him the best of luck. Hopefully we can get him to play in the next event. In the meantime, I went scrambling to find a celebrity guest to fill in on short notice. I sent an email to the Hilton Sisters' PR person. I explained to them the history of the Hilton Sisters nickname for pocket queens and invited them to play in the tournament, specifically requesting Nicky, but I said "We'd be more than happy to have Paris and Tinkerbell."

I had this image of Al Cant Hang swigging back a double SoCo with Tinkerbell in his arms and then handing the little pooch over to Paris after I knock her out with The Hammer! Alas, I have not heard back from them. Not to fear, I already sent out emails to some of my favorite TV characters hoping that they might randomly show up at Sam's Town. That list includes Cousin Oliver from The Brady Bunch, Screech from Saved by the Bell, Rerun from What's Happening, Arnold from Diff'rent Strokes, and Greg Evigan from BJ and the Bear. 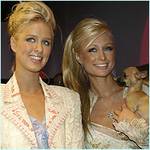