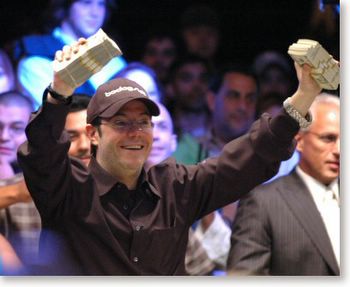 2006 WSOP Champion: James "Q-9" Gold
Photo courtesy of Flipchip
If you don't read my poker blog, then you missed out on who won $12 million late on Thursday night. Jamie Gold, a Hollyweird agent from Malibu, CA took down $12M for first place at the 2006 World Series of Poker after he beat out 8,772 other players in the largest poker tournament of all time.

3:40am... Recent Elimination: Jamie Gold busted Paul Wasicka and we have a new WSOP Champion. Gold limped and Paul Wasicka checked his big blind option. On a flop of Qc-8h-5h, Wasicka bet 1.5 million and Gold moved all in. Wasicka called with 10-10. Gold showed Q-9 aka "The Gapped Toothed Hooker." The turn was an ace and a 4. Gold's Q-9 held up and he became the 2006 WSOP Champion winning $12 million. Paul Wasicka finished in second place and won $6,102,499.

After his victory, Gold called his dad to tell him that he won. His father has ALS and was sleeping. He said that his winnings will help his father out.

Here are some Jamie Gold quotes:

"I played the best poker of my life. I feel real fortunate that the cards came my way."

"This never would have happened without these amazing people who love for me and care for me. I have the greatest group of people around me. There's no question that this would not have happened without them. I'm very needy. I needed massages, water, blueberries, and food. They kept me sane, happy, and focused. I feel like the luckiest guy in the world. Not because of winning the championship, but because of them. These people believed in me for a very long time."

"Blueberries are brain food. I love to eat them. They make me feel good. Blueberries were probably the reason why I won."

Flipchip posted winner's photos post over at Las Vegas and Poker Blog. I'll have a recap soon for here and my newest client... a Swedish newspaper!

Take a peek at some things that have already been published:

Congrats to Jamie Gold. He played much better than people will give him credit for.

That's it for now. Las Vegas nearly killed me for a second year in a row, but I survived the 2006 WSOP without losing any limbs, going to prison, or getting my badge revoked. Thanks to everyone for the support and putting up with my madness for the past two months and to my friends who put up with me hanging up ont hem, or not answering emails or phone calls.