I used to drink at the Hooker Bar at the Rio Casino during dinner breaks with Otis. That's what we did last year. We'd rush off to the Hooker Bar and down cocktails while we played video poker. This year, we've been hanging out at the Tilted Kilt, a Scottish pub that served food.

Otis, Wheaton, and I have been going there five days a week for about five weeks. We know most of the waitresses by name. They also know us by name. 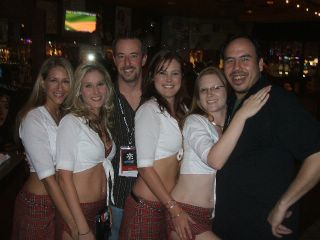 Hanging with Otis and the Tilted Kilt waitresses
Photo courtesy of CJ
I like their chicken club sandwiches. I ask for a side of spicy creole ranch that they have, which is kick ass. I also drink pints of Stella, which according to Howard, one of my buddies from London, is considered "wife beater Beer" in England. Oh yeah, and the waitresses look like Catholic schoolgirls in their kilts. Yummy.

By the way, I hate deadlines. I have only a few more days of work here at the Rio. The World Series of Poker is supposed to end sometime in the early hours on Friday morning. I have about a week after the WSOP ended to write a dozen or so articles. I'll officially be finsihed with the WSOP by the 17th or 18th when I turn in my last freelance article. I can head off to the cooler climates of Boulder, Colorado then spend a full week in Hollyweird before I return home to NYC after Labor Day.

I can't wait for the WSOP to end. I'm exhausted and mentally drained and sick of seeingthe same fuckin' people day after day. I'm going on hiatus from covering poker tournaments until January of 2007, so I can travel and re-write Jack Tripper Stole My Dog and begin a screenplay. I'm so burnt out on poker that my dreams are nightmares because all I dream about is poker.

I've been busting my ass the last six weeks to put myself in a position to earn enough money so I won't have to work the remainder of the year. I've been making sacrifices regarding sleep and partying with friends to make sure this happens.

Just a few more days, I keep telling myself, then I'll have the rest of 2006 off. Four months of vacation... I can't wait.

Oh, and I scored tickets to Widespread Panic at Radio City Music Hall in mid-September. It's gonna be a fun four months including Vegoose in October.
by Pauly at 8/06/2006 11:27:00 PM