On Saturday, I woke up in my hostel covered in skeeter bites. I passed out with my shirt off and the window wide open. They feasted on my flesh and when my bartender Kiwi roommate came home from work at 7:30am, he mentioned something about the series of bites on my stomach.

That was the last day in the hostel and as much as I wanted to stay due to social reasons (aka the hot German chick with no underwear and the cute nymphish chain smoking chick from the French Alps), I was happy to get out and find a different place to stay, with a better shower and a more comfortable bed. I had been sharing a room with only one other person who was never around, but I slept in the top bunk of a bunk bed and almost rolled over onto the floor in the middle of the night.

When I was in Byron Bay, I stumbled upon a travel website that boasted rooms at the Holiday Inn in Kings Cross for $150 Aussie per night. Since Brandon was going to be crashing with me for two nights, that meant the room would be not too expensive. I was way under budget and decided to splurge. Besides, most hotels in Sydney are around $200/night.

We wandered over to the hotel which was only a few blocks away. It was 10am and we had to wait until 2pm to check in. We were only there to stash our bags but luckily a room was available. We took it and I jumped right into the shower, a long hot shower where I spanked it twice. Brandon hopped on the internet and chatted up his lady friend while we figured out what to do for the day.

We headed over to Manly Beach and took a ferry from Circular Quay where we played thirty minutes of Chinese Poker. The ferries are green and yellow monsters that shuttle thousands of people from Sydney out to the northern beaches. Manly Beach was named so after one of the early British naval commanders floated by and saw manly looking Aborigines on the beach. (Oh, by the way Garth... I did some research and discovered that Australia Day was when the First British Fleet arrived in Sydney on January 26th, 1788 with 100 convicts, troops, and other colonists.) 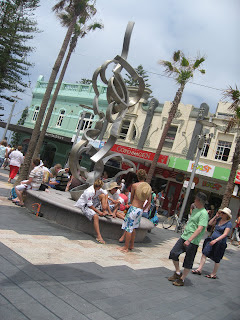 Sculpture on Corso Street
Manly Beach is a mini-tourist trap, but there's plenty of small shops and eateries on Corso which leads you from the ferry terminal down to the beach. The beach was super crowded for a Saturday, especially on a three-day Aussie weekend holiday. Plus thee were different competitions going on... a lifeguard race and a rowing race which took up most of the beach.

We walked around and was bombarded by a nasty blitz of wind which kicked sand up and around everywhere. We picked the wrong day to head to Manly. 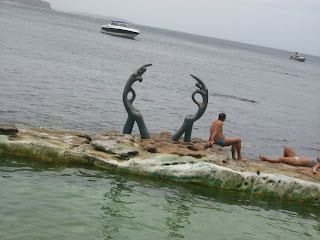 The best part of the beach was getting a cheap sandwich. There was a tent where they sold breakfast sandwiches. For $5, I got two sausages, two pieces of bacon and a fried egg with BBQ sauce. Yummy. 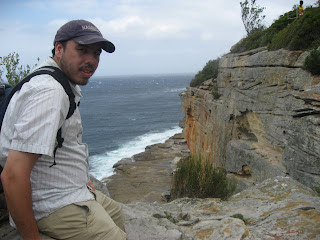 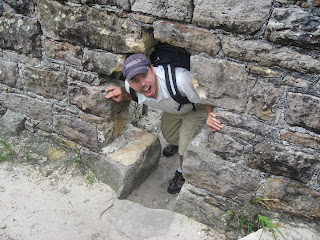 We looked at the map and decided to walk over to Shelly Beach where all the scuba divers were. Then we hiked into Sydney Harbour National Park. The climb up was not too bad and we had some amazing views of Manly Beach. We also experienced some wildlife such as lizards. We spotted on that had a tail that was three feet long. 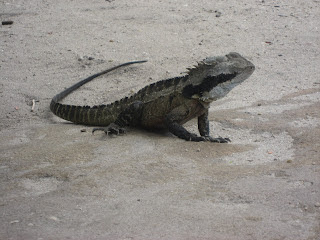 This lizard freaked the shit out of us
After the hike, we decided to head back down to the beach. That's when Nigel called. He's is a publisher of a Australian Travel magazine and a devoted reader of my blogs who lives in Sydney. He invited me and Brandon over to his BBQ.

After we took a ferry back to Circular Quay, we headed over to Glebe to Nigel's place which was a few blocks from Ali's. Funny that we were hanging out in Glebe for two nights in a row, at a BBQ, drinking with strangers. But they weren't strangers... Aussies are extremely friendly and hospitable people. Nigel's friends were fascinated that Brandon was a "professional gambler" and that I got paid to travel the world and write. 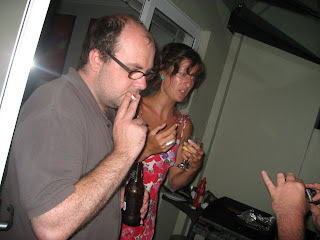 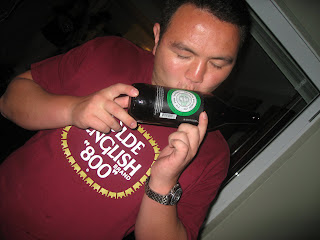 Partying with fans. It was a surreal scene kinda like out of Almost Famous when the guitar player headed to a high school party and jumped off the roof into the pool exclaiming, "I'm a golden god!" Except that there was no LSD and no pool for me to jump into off the roof.

We hung out in the kitchen and drank heavily as they made mojitos from scratch. We got shitfaced and one of the guys wanted to challenge Brandon to a head-butting contest. I suggested that Brandon don't do it. He had size on everyone but Aussies are world champion head-butters. One drunk named Henry carefully inspected Brandon's head.

"I can't seem to find a weak spot," he said and dropped his offer to butt heads.

When the liquor ran out, Nigel yelled, "Off to the pub!" And about 20-25 people stumbled out into the streets and wandered into the pub a few blocks away. The basement had slot machines (or pokies as they call it).

Brandon and I played pool against Nigel and his buddy Gavin and it's safe to say the the Yanks are dominate pool players after we beat the Aussies 2-0. The bar upstairs was an actually fish tank where they served the drinks on. Trippy for sure. The bathrooms used Barbie and Ken dolls on the doors to indicate what sex bathroom you were supposed to go in. 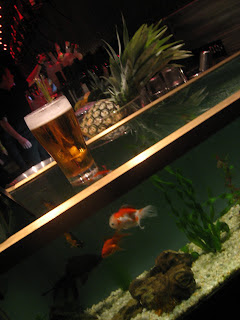 The fish bar
When the pub closed, we headed to another bar down the street and sat in the back. We drank Coopers Pale Ale and played poker. Actually it was $2/hand and we'd all go in blind pre-flop. An Irish guy wandered up and joined us. We played four-way for a bit and the winner of the hand would take down $8 in $2 Aussie coins. I cracked Brandon's J-J with 6-5s after I rivered a flush. Nigel had Kings almost cracked by Brandon's A-Q. The flop was an Ace but Nigel rivered a two-outer to scoop the pot. 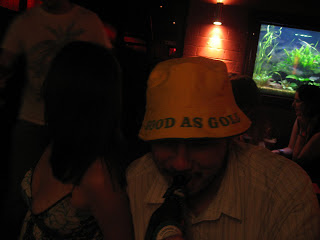 I ended up the big winner and won enough for cab fare back to King's Cross where the strung out hookers sit outside on milk crates looking for johns. When we stumbled out of the cab we could not get into our hotel. They make you ring a buzzer before they let you in.

"McGrupp," we both blurted out.

Except we didn't know what room we were in.

"Somewhere on the first floor," I screamed.

"Fuck! My name is McGrupp and I'm on a room on the first floor. Here's my key," as I placed it up against the glass door.