When I was 19, I was smoking weed and drinking my eyes out while sitting on the porch of my fraternity house trying to finger shitfaced sororitiy girls.

After the final table ended, I went to dinner at a steakhouse with Tim and my boss Shecky. We ate there once before and it was overpriced, but an excellent meal. Our table was not ready, so we headed to the bar and bumped into some friends of Shecky. One of them is an Aussie named Ralph who is a well-to-do businessman who is sickly wealthy. He bought us a bottle of wine that cost somewhere near $2K. He doesn't just have a "black" Amex card... Ralph is such a high roller that he has a "Titanium" card and supposedly there's only like 50 of those on the planet. That card is literally made out of steel and comes with a 24-hour personal assistant... free of charge. I think his assistant is named Wang.

Anyway, Shecky told Ralph that we were having problems finding a room on the Gold Coast. Since we were so busy the previous two weeks, we kept putting off finding a room. It is the middle of summer and with the Big Day Out music festival nearby, there were no rooms available. Ralph picked up his mobile phone and dialed Wang and told him to set us up.

We eventually had dinner and I ordered the Black Angus porterhouse with a bernaise sauce. After dinner there was a big "players party" at one of the clubs in the casino. I got hammered and wandered around snapping photos of Gaz (one of my colleagues who is one of the more popular figures in Aussie poker) who hired me as his personal photographer. 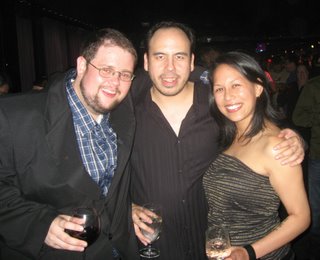 Gaz, Pauly, and the Rooster's favorite Aussie... Cory-Ann
Of course I was hammered and passed out for a few hours before I had to get up, pack, check-out, and finish two articles which I had a deadline. One was for a magazine and the other for Poker News. I cranked out 1,500 and 3,900 words in less than three hours. I had already pre-written most of both pieces, but I worked as fast as I had ever worked hungover to all hell.

Pressed for time, I was lucky that Cory-Ann, one of my co-workers, checked me out of the hotel and put all my room charges on the company credit card. It was somehwere close to $600 with over $250 in internet charges, plus over $100 in phone calls to fuckin'' Citibank or Neteller. The rest was mini-bar charges and room service. Oh then there was the $32.99 breakfast buffet that was good but overpriced. I must have put over $500 in charges on my boss' tab. I wonder if he noticed? I kept signing "Shecky" at the various bars or at the breakfast buffet.

I had one hour to kill and walked along the Yarra River to smoke up the rest of my herbal supplements. I also ate some ice cream and soaked up my last moments in Melbourne. I met up with Brandon Schaefer and Shecky so we could head out to the airport. Schaefer and I are going to travel the rest of my time in Australia together, while Shecky is joining us for four days. Our plan was to head up to Surfer's Paradise for two days and catch Big Day Out music festival which is like Bonnaroo, Cochella, and Lallapolooza rolled into one. Then we'll spend two days in Byron Bay (per suggestions of Friedman and Senor), before we explore Sydney before I leave Oz and go home at the end of the month.

At the airport, we played Chinese Poker and I got smoked. Schaefer is a professional poker player (although he'd tell you he's a semi-pro) and Shecky used to be a pro and is now an executive at a global poker news organization. I was playing against two solid players and would have to shrug off my hangover if I wanted to win. No such luck.

We flew on the Aussie version of JetBlue called JetStar and the seats were cramped. The stewardesses were hot and you had to pay for your drinks and snacks. We finally arrived and the Gold Coast looks a little bit like Southern California or Florida. Lots of beaches. Lots of sun. Lots of hot chicks.

Ralph's assistant Wang ended up booking the Palazzo Versace which is like 600/night. Shecky told him it was out of our price range since we were staying two nights. Ralph said, "No worries mate!" And he picked up the tab. We love Ralph.

The Palazzo Versace is a snooty swanky 5 star hotel with marble floors and glasses with the image of Donatella Versace embedded in them. Our room is a one bedroom suite with a huge bathtub and balcony. Pictures pending but Jen Leo posted some pictures of Palazzo!

I checked my email and Nicky had just gotten into Las Vegas. She was hired to cover an event and got a comped room at Caesar's. She emailed the pics of her digs (which she said was bigger than her and Showcase's entire apartment) and it looked swanky. I shot her an email back and told her how she'd love the Palazzo Versace. Ultimate luxury.

We headed down to a surfer's bar down by the beach as we overlooked the Ocean. We drank pitchers of beer. They call them "jugs" here and they were $10. What a bargain. We OD'd on nachos and potato wedges (mixed with sourcream and a sweet chili sauce). We headed back to the hotel and drank alongside the pool. The people there were dressed up in tuxes and sleek black cocktail dresses.

We were out of place wearing our beach wear as everyone around us looked like they were dining out in Monte Carlo. That's when we busted out the playing cards and sat down to drink and play Chinese Poker. Keeping it real.

The stars were fantastically bright and a group of tanned 17 year old high school chicks in sundresses sat next to us. Schaefer could not stop checking them out as we played cards and I wondered if any of them had any weed. I was down a lot of money after that terrible session of cards in the airport and came storming back while Shecky lost a bunch of money. Of course, Schaefer was winning the most. And he should. He's the pro.

The girls eventually left and we stumbled back to the room. I woke up hungover. Again. That seems to be par for the course since I've arrived two plus weeks ago. 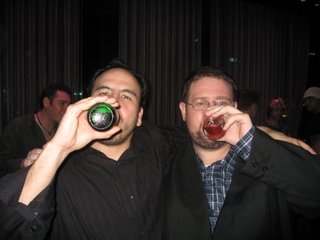